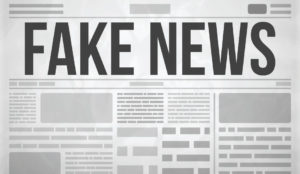 The LameStream Fake news media and globalist cabal is going all-out to rob Marine Le Pen of the French Election. We’ve seen this happen in the US with their assault on Donald Trump. Were it not for his overwhelming support that defeat the voter and election fraud, far-left queen Hillary may very well have prevailed.

We see a similar scenario developing in the France Presidential Election but how likely is overwhelming support for Le Pen to defeat election fraud in a socialist European nation? It’s stacked against her and our only hope is that liberty loving French turn out in droves to vote. France has a long history of election fraud.

How can we tell fake news regarding the French election? Any news report that describes Marine Le Pen as ‘far-right’ and Emmanuel Macron as ‘centrist’ is a strong indicator of fake news. Both the AP and Reuters articles below qualify as heavily biased fake news. So does all the fake news corporate media.

Marine Le Pen is a moderate nationalist and properly identifies Islam as an idiocrasy of violent conquest. Therefore the globalist must categorize Marine as a ‘far-right extremist.’ Emmanuel Macron is a globalist, socialist, pro-tyrannical EU, pro-islam and stated after the ‘Kalashnikov’ Islamic terrorist attack that terrorism is ‘part of our daily lives for years to come.’ This qualifies Macron to be labeled moderate. How pathetic!

This is how fake news operates. The descriptors tend to stick and are repeated by all other fake news corporate owned outlets who sing the same song from the same script. Macron is accused of siphoning expenses as France Economy Minister to finance his En Marche! “Forward!” movement.

En Marche employs the tactics of and may be aligned to the terrorist group Antifa. He certainly has their support.

The actual support for Macron and his policies could be far lower than 41% according to a survey by Ipsos/Sopra Steria. The polling firms say that a large section of the voters who support Macron are only doing so because they want to oppose Ms. Le Pen rather than believe in the message of the globalist candidate.

But recent French polls have Macron with a 24% lead over Marine Le Pen? This is Donald Trump fake polls déjà vu. Voting ‘often’ is another election fraud uncovered by the Le Pen campaign. About 500,000 French citizens living outside France have been issued two voting cards for the first round 2017 election. Who knows what ‘glitch’ will manifest for the general election on May 7.

French authorities state, “They will not be investigating the massive voter fraud until after the election,” meaning they are allowing double votes to count. Hello Chicago!

Clearly the large support for Marine Le Pen is rattling the cages of the globalists whose lifestyles are dependent upon the EU corruption. Brexit and the Donald Trump election has sent shock waves through the globalist elite smugness in controlling the narrative and the candidates running for office.

Le Pen has vowed to “Destroy the New World Order” when she is elected President of France. After Donald Trump’s victory they know this is possible even with fraud as their favorite campaign tactic. “I will dismantle their corrupt, self-serving institutions with my own two hands if I have to” proclaims Marine Le Pen. “The people have spoken and their message is clear: the New World Order is finished.” – Marine Le Pen

The fake news propaganda machine has shifted into overdrive to assure Marine Le Pen is defeated. They are demonizing her with relentless fake news and lies days before the election on Sunday May 7 giving her little to no time to refute the false attacks on her.

Do the French know just how fake the corporate media is in France and Europe? I hope so. This election is so vital for liberty to survive because Donald Trump appears to be co-opted by the Rothschild and Vatican cabal so US support for nationalism is diminishing daily. Vive la France Marine Le Pen and defeat French globalism and bolster resistance to the Brexit attacks and give ‘Free Europe’ a chance.

Article: Even If Elected, a Majority of French Would Not Support Emmanuel Macron

NHN Article: The Denial of Islam is Our Titanic