UPDATED 12/24/2018. It should be completely obvious that the current world structure is established for globalism, tyranny and totalitarianism to reign. The global assault on national sovereignty with open borders, unfettered migration, unfair trade and meaningless military alliances must come to an end.

Who are the missing 7 nations that did not sign the migration pact? The UN is not revealing the nations that refused to sign. I guess they want to badger and harass them in private. Criminal!

Did Theresa May betray the people of the United Kingdom by signing the pact? Neither the UK or the UN will say. That leads me to conclude they probably did sign the pact.

Most all the countries on this list can and should form the foundation for a new “Sovereign Nations Alliance on Strategic Trade and Defense” (my invented name) that must be formed to replace NATO and the United Nations. Both NATO and the UN have outlived their usefulness by morphing into globalist tools to implement global tyranny by destroying national sovereignty by any means necessary. That makes them global terrorist organizations and they should be treated as such. The time is ripe for a change in global alliances for despite talk to the contrary there is no binding global governance organization. Is one necessary? A discussion for another time.

President Trump is the perfect leader to negotiate the terms once he purges the deep state globalast tyrants from within the United States’ government. Unique issues for Korea, China and Russia must be negotiated including non-military aggression and fair and reciprical trade before admission to the alliance is granted. Negotionas with the other nation states will be a lot less cumbersome.

This new strategic alliance will immediately displace NATO for a majority of its members are enemies to national sovereignty. The EU and the UK are the enemy of liberty, national sovereignty and contrary to US interests. Therefore a new international alliance must be formed to defeat the evil of globalism’s tyrannical persuit of technocracy and corporatocracy as the mechanisms of world dominion. NATO the UN and all other globalist agencies including the central banks are globalist tools of totalitarianism. 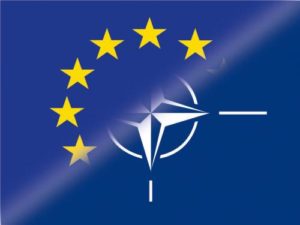 This new strategic alliance will immediately replace NATO for a majority of its members are enemies to national sovereignty. The EU and the UK are the enemies of liberty, national sovereignty and contrary to US interests. Therefore a new international alliance must be formed to defeat the evil of globalism’s tyrannical pursuit of technocracy and corporatocracy as the mechanisms of world dominion. NATO the UN and all other globalist agencies including the central banks are globalist tools of totalitarianism.

The United States must defund and withdraw from membership in the UN and NATO completely. Many nations in NATO are the enemies of the United States and that includes the UK. This new alliance may also be a useful tool to pressure Russia and China into fairer and recipricol dealings on global trade for all share in common the enemy of globalism.

A 25 to 30 nation strategic alliance may be the perfect counterbalance to compete against globalist incursions into their long sought after New World Order. While this may or may not prevent world war as a retaliatory tool of the globalist’s lust for and subsequent loss of world power; the civil uprisings for national sovereignty happening across the globe may serve to minimize efforts for a scorched earth policy; a tactic with a long history among the tyrants.

The key strategic partner to have membership in this new alliance is Russia for their nuclear arsenal and aggressive goals to reconstiture the collapsed “Soviet Empire” by bringing back into the fold their lost satellite nations is clearly a hard line point of negotiation. Especially when those nations choose to remain independant. If there is anyone most suited for this task restructuring global alliances it is our own President Donald J Trump. We’d be hard pressed to find a better negotiator and deal maker than he.

Article: Time to Withdraw from NATO

Article: Should The US Withdraw from The UN?