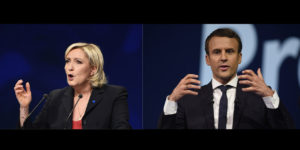 For liberty to reign again in France so must Marine Le Pen. Enough with this calling the extreme globalist left like Emmanuel Macron a moderate. Macron is an extremist and he is campaigning on the ‘fact’ that terrorism as an “imponderable problem” which will be “part of our daily lives for the years to come.”

Just how twisted is that? Sure, if he says he will even attempt to bring order to chaotic France he is a liar. He’s not trying to deceive you for he is warning you that the horrors of hell are going to remain for as long as he remains in French government. Oh please dear liberté loving people of France, reject this madman!

Islam plays a dominate role for the extreme left to destroy nationalism by instilling fear through terrorism and the political correctness movement which is just another form of ‘polite’ terror. All are designed to destroy the culture so the new world order may be imposed upon all peoples everywhere.

If we’ve learned nothing from the left its ‘by force’ is the only way they can achieve power for their ideology runs in diametric opposition to the natural order of things. Nationalism, language, culture and borders are the hallmarks for what make people free and unique. But not for the globalist who call that extreme. 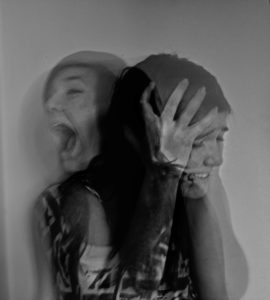 The extremism of the globalist left has become so polluted and deranged that their unstable robotic minions can no longer celebrate the different aspects of race and culture. The globalist derangement syndrome has become so pronounced that they can no longer accept humanity flourishes when a mother and father bound together in marriage give birth to male and female children raised in their family’s culture, language and beliefs.

This is offensive? Only to the unbalanced and mentally ill who roam the streets freely untreated and unmedicated. They call their mental disease an ideology so they can hide in plain sight under the banner and protection of a political party that shamelessly worships their votes more than their psychological well-being.

The more one entrenches themselves in lifestyles of perversion the more decadent they become and less able to function in society. I’ve seen this work flawlessly in America, and thanks to election and voter fraud, they prevail. In America they call themselves democrats and GOPe or republican establishment.

Their solution to disguise their dysfunctional illness is to riding themselves of all societal norms under the guise of globalism. Mental illness and perverse behavior is not something to be celebrated but treated.

Marine Le Pen is a healthy well-balanced candidate running for President of France. She is the moderate running for office, at least from the perspective of a conservative American. Few Americans understand the difference between political Europe and America and though the terminology used is the same, the differences are quite profound.

The Gendarmerie (French Police) support Marine Le Pen primarily for her intelligent and reasoned policies on immigration and her opposition to the ‘open border’ nightmare of the globalist left and the tyrannical European Union. The Gendarmerie must deal with the carnage and destruction left in the wake of Islam terrorism and crime on a daily basis.

Civilized human beings, regardless of profession can only take so much bloodshed especially when it is reckless political ideology as the root cause of the butchery. If the polling in France is anything like the polling in America, Marine Le Pen does well to ignore the polls except by those done internally. She has been under assault by the fake news media in France and Europe. Some things we in America are intimately familiar with.

Marine Le Pen is highlighting her position on crime, terrorism and security which she says is “completely absent” from the presidential campaign in a live debate just minutes before news of the ‘Kalashnikov’ Islamic terrorist attack on the famed tourist laden Champs Élysées in central Paris that killed one Gendarmerie, wounded three others and a tourist.

I have such contempt for the disturbed fake news media that would dare say the bloodshed of terrorism ‘helps’ one candidate over another for who benefits from slaughter? Marine Le Pen believes that mass immigration is not an opportunity but a tragedy for France.

If elected, Le Pen said she would immediately deport all foreign nationals on the terror watch list and asked her rivals in their final debate just minutes before the Islam ‘Kalashnikov’ terror attack, “Explain to me why we should take the risk of keeping them in our territory?”

Such common sense is sure to be attacked by the mentally ill globalists as ‘extreme’ and ‘far-right’ which is proof of just how deeply removed these sociopaths are from reality. Yes, I’m calling them sociopaths for only does the deranged mind refuse to take measures to prevent impending slaughter; they go so far to engage in vitriolic attacks to impugn those who do as extremists. Pay attention to that as you read and watch the news.

The utter madness of the globalist left. Hopefully sanity shall prevail in France on April 23rd when the first round of the French Presidential Election takes place. The fact that this election is not a hand-down runaway for Le Pen is disturbing for this shows just how unstable many French people have become. It’s a worldwide travesty on both side of the Atlantic.

Article: ‘Moderate’ Macron: Terrorism ‘Part of Our Daily Lives for Years to Come’

Article: MARINE LE PEN SMACKS DOWN REPORTER: ‘NO ONE TRUSTS THE MEDIA’