The Glowing Orb in Saudi Arabia 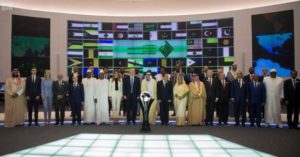 Lots of mystery and wacky theories emerging from the glowing orb in Saudi Arabia during the President Trump visit. The orb was revealed during a ceremony to introduce The Global Center for Combating Extremist Ideology in Riyadh, Saudi Arabia.

As soon as the pictures taken by the Saudi government were released the internet pics went viral and the netizens went ballistic with every bizarre theory imaginable even by net standards which incidentally are quite low. Even the lamestream pitched in with their bizarro-world interpretations.

David Wheeler of CNN claims the orb is his friend Orville that ‘appeared to me in a beautiful hallucination at Burning Man back in ’95’ says Wheeler. Yeah, I believe it. Wonder if Wheeler is still dropping acid?

CNN knows how to recruit don’t they? There’s a strong argument one can make from this article alone; but I think it fair to dismiss this as Wheeler’s feeble attempt at jocularity, at least I hope so. If you want to hear the strange net interpretation your welcome to peruse the articles and video listed under references below.

I have a preference for reality – yes, boring I know but that works just fine for me. Let’s look into what the orb really is and what it does. In this inauguration ceremony it acted as an on-switch that upon touching it lit up a white runway revealing around a dozen of the 200 or so technicians employed by the Global Center. They sat at their computer stations while disco lights and lasers lit up the Center. Quite a spectacular display.

The runway lights then led to a huge screen wall where a video of an English speaking woman and an Arabic speaking man explain the purpose of The Global Center for Combating Extremist Ideology. It is to digitally monitor extremist activities online by employing specialists in radical ideology and hate speech as analysts. This is horrifying to hear for a liberty loving patriot like myself. We’re going to let Islamic sponsors of terror, leftists and globalists define radical ideology and hate speech? God help us!

With the globalists seeking to usurp power from the nations to create their new world order, the chills that went up my spine is still causing me to shutter. Look what’s happening with political correctness and censorship of free speech by governments including the US and their minions Fakebook, Twitter, Google, You Tube and a plethora of other technology and internet companies?

The Global Center is using a model developed for the United Arab Emirates alleged to combat Islam extremist ideologies. I’m pretty sure that a conservative westerner defines an extreme ideology is the polar opposite to how totalitarians, globalists and Muslims define it. This ‘Trojan Horse’ is not good.

The Global Center is able to monitor and display on the gigantic screen wall ongoing extremist and violent activity in ‘real time’ happening everywhere on the globe. The stated aim is to stop the spread of violent extremism by monitoring ‘potential’ terrorism threats and to ‘reveal and confront’ extremist speech! 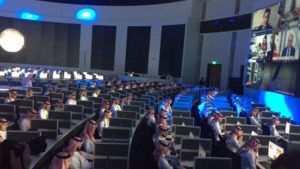 So how is it going to accomplish that? If you’re not scared already here’s where it gets really scary. The Center will be receiving feeds from the NSA including raw signal intelligence data. All the raw data received from emails, telephones, cell and mobile phones, computer keyboard strokes, satellite communications, internet and just about every communication source and device will be collected and processed via sophisticated algorithms.

We already have all our data being collected but now it is going to be monitored and processed via a ‘foreign government’ not confined by such silly old documents like the US Constitution and Bill of Rights. I think freedom has been flushed down the proverbial toilet. Now we can be spied on without those legal restrictions that once safeguarded liberty.

Both the Saudis and the US say this spying activity will be focused upon Islamic extremist groups like Daesh, also known as the Islamic State (IS); ISIS; al-Qaeda; Hezbollah; Hamas and others. I believe that radical Islamic terrorism will indeed be the focus … for a time.

But once this system is in place, becomes fully operational and has all the ‘bugs’ shaken out of the system what will prevent defining extremism and hate speech as someone posting in their social media account speech or a meme unflattering to Islam or Mohammed for example?

What’s in place to prevent a cyber-attack on individual CPU or a drone attack on a Jewish prayer group as hate speech? In case you’re still wondering … NOTHING! There is nothing to prevent gross abuse and criminal mischief being perpetrated on anyone anywhere in the world. Ahem, CIA Vault 7 ring any bells? Need I say more?

I believe and support that Muslim countries must take the lead in combating radical Islamic terrorism by eventually replacing all Islam sectarian rule with non-sectarian governance. You do not change Islam, you can only hope to contain it. 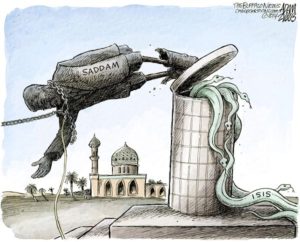 We need to have strong ‘non-sectarian’ rulers able to forcibly contain its evil ‘spillage of jihad’ into neighboring nations. If we learned anything it’s that the Islam fundamentalists and zealots espouse terrorism; and no, they are not twisting or perverting Islam but enforcing it.

Islam sectarian rule must be prevented from holding the reins of power and that it is in the interest of all civil western nations to assist the Arab in achieving non-sectarian governance and their watered down interpretation of Islam. When this was done in the past order was relatively maintained by containing the devastation of true Islam.

We need to return to that status if the civil in civilization is to be restored. Unless your strategy is to completely annihilate all Islam from the face of the earth, containment via non-sectarian governance is the next best alternative. This global spying network is Riyadh regardless of what you call it pierces the veil of liberty. What is to prevent gun ownership being labeled extremism and hate speech?

It is time to bring to an end the Bush Doctrine. We cannot destroy an ideology with bullets and bombs. We can reduce their numbers with war and that is not a bad thing. However, their ideology lives on with the survivors seeking to enact vengeance for the loss of their ‘soldiers of Islam.’ This insanity has been going on for 1400 years and I am not optimistic in it turning around. Islam will never change, it can only be contained.

All the Bush Doctrine accomplished was deposing non-sectarian rulers with sectarian zealots and unleashing the devastation of Islamic Invasion and Jihad into western nations as a globalist strategy to destroy western culture and borders. We must end the insanity of doing the same thing over and over yet expecting a different outcome.

Muslim nations must be the ones to contain their Muslim ideology as expressed through Islam. The Global Center for Combatting Extremist Ideology is extremely dangerous global surveillance network that I would simply level to the ground with strategically placed smart bombs and go with what we know works … non-sectarian government containment.

So those who want to preoccupy themselves with Hollywood, magic and occult interpretations of the glowing orb which is a distraction to the task at hand … Containing Islam. Sure, reality is not as exciting as occultic interpretations but what can I say except I’m a really boring realist and wouldn’t have it any other way.

Article: TRUMP TOUCHED A GLOWING ORB IN SAUDI ARABIA AND EVERYONE HAS GONE INSANE