Mueller Was Courier for Stolen Uranium to Russia 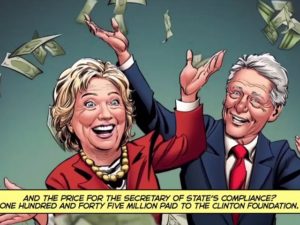 Robert Mueller must step down as Special Prosecutor for failing to disclose his intimate connection in the sale of highly enriched ‘Stolen’ Uranium to the Russians. How could Deputy Attorney General Rod Rosenstein not know about this?

Not only was the Uranium stolen but an illegal ‘pay-to-play’ scheme had $145M illegally flowing into the Clinton Foundation. FBI Director Robert Mueller was the actor that delivered the stolen uranium to Moscow.

FBI Director Robert Mueller acted as courier for the stolen enriched uranium for Hillary Clinton to Russia. And THIS is the man selected to probe into Russian collusion allegations with President Donald Trump? All the Mueller appointment did was reactivate a former DC Swamp Creature to slither back into the swamp.

He will step in for disgraced FBI Director Comey as a man that not only cannot be trusted but is a guilty party in the illicit transportation of stolen uranium to Russia. Just how insane does this get and just how stupid do they think we are?

Plenty it seems. Mueller’s role as Special Prosecutor is rapidly expanding in scope and authority. Kevin Johnson and Erin Kelly, reporters for USA TODAY state in their May 25, 2017 article, “Rep. Jason Chaffetz, R-Utah, Chairman of the House Oversight and Government Reform Committee, was forced to cancel a hearing where he sought Comey’s public testimony, saying that the former director needed to consult with Mueller first before offering any public comment.”

It seems Mueller will be determining all Congressional access to critical witnesses and documents. The stench of a Mueller cover-up and criminality is already permeating the halls of Congress. It seems he will also provide cover for the Hillary Clinton Russian Uranium scandal as well as his own butt. We just replaced one swamp creature with another. 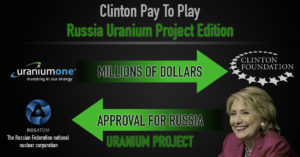 Just like most Clinton ‘pay-to-play’ schemes, they are purposefully complex to make it difficult to comprehend and prosecute. The skinny is that Mueller is a democrat and not a Trump fan. Can he or anyone else articulate what ‘alleged’ crime President Trump committed? You only get that ‘dear in the headlights look’ if you do.

Evidence of criminal activity by democrats, DNC, Hillary Clinton and the Obama regime routinely get dismissed and go unreported by the propaganda ‘fake news’ media. They would rather spend millions on a special prosecutor investigation where there is absolutely ‘no evidence’ of any criminal activity by the Trump team.

The slew of criminal activity routinely dismissed by bad actors Obama, Bill & Hillary Clinton, Lynch, Podesta, Comey, DNC et al and the crimes of real Russian espionage, business dealing and illegal sales of stolen uranium. Let’s not forget the criminal leaks by democrat deep state operatives; election fraud and fixing by the Clinton campaign and DNC; and most recently the non-murder investigation of Seth Rich and the evidence that he leaked DNC documents and not the Russians.

Oh no, let’s call all those who oppose the democrat globalist agenda ‘conspiracy theorists’ and have the fake news propaganda media do everything in their power to muddy the waters and bury the truth. Folks, we’re not talking UFOs and alien races ruling the world here but ‘evidence’ of criminal acts of murder, espionage, sedition and treason so a criminal enterprise may remain in power with their death grip on the American political and judicial systems.

The FBI under Mueller colluded with Obama’s IRS/DOJ to try to jail Obama’s political opponents. He is a deep state swamp creature no different from Comey or other establishment actors since Bush I. We fired one swamp creature only to replace him with another. Welcome to the DC merry-go-round where the more things change the more they stay the same. When will it end?

Article: Robert Mueller Emerging As Gatekeeper for All Russia Probes, And Congress is Wary

Article: The Clinton Foundation Received Millions From Investors As Putin Took Over 20% Of US Uranium Deposits

Article: One Year of Silence on Hillary Clinton Uranium Deal

What’s Really Happening With The Trump-Kushner-Bannon Trilogy?
M: The Truth Continuum
Charlottesville: What Happens When The Left Normalize Political Violence