Shawn Lucas Murder: Obscured in The Shadow of Seth Rich 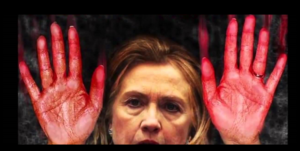 Hillary Clinton has a lot of blood on her hands

It seems people associated with the DNC and the Clintons who seek truth often show up dead. Such is the case with Shawn Lucas and Seth Rich. The Seth Rich investigation is now garnering attention and moving forward but not so with Shawn Lucas.

Shawn Lucas is the man who served the court papers to the DNC for the class-action ‘fraud’ lawsuit against them was found dead, face-down on his bathroom floor on August 2, 2016. For this reason we got more than our fill of fake news by the corporate zombie media who will level ‘conspiracy theory’ accusations upon anyone who dare seek an investigation into the mysterious deaths of people connected to democrats.

How dare they? We all know democrats are above reproach. Don’t believe me? Just ask any democrat, they’ll be happy to ‘straighten’ you out.

The fraud lawsuit was filed on June 28, 2016 by Bernie Sanders supporters against the DNC and then DNC Chair Debbie Wasserman Schultz for “fraudulent, negligent and misrepresented their true motivations in the Democratic presidential primary.”

Schultz was disgraced and forced to resign from the DNC due to the WikiLeaks email scandal shortly after the death of Shawn Lucas. The disgrace of rigging the democrat primary for Hillary Clinton is a major plus on Shultz’s resume and was immediately hired to work in the Clinton campaign.

The scandal did not seem to deter the DNC much for the next Chair, Donna Brazile was also disgraced and forced to resign for fraud and election rigging. Who can forget her passing questions to Hillary Clinton in advance of Clinton-Trump debate? My goodness it seems DNC democrats are indeed a criminal enterprise.

On November 1, 2016 the DC examiner’s office released their report that Shawn Lucas’ death was by “Accidental Means” due to ingesting fentanyl, cyclobenzaprine, and mitragynine. So consuming these three drugs is an accident? No consideration for suicide or murder? Let’s take a closer look into these drugs.

The examiner’s report stated the following, “fentanyl was a very strong ‘synthetic opioid analgesic’ which was quite the same as morphine. Cyclobenzaprine was a muscle relaxant, while mitragynine was the chief constituent in the herb Kratom.” Kratom is used in some teas and sold over the counter as a legal opioid.

Fentanyl: a potent, synthetic opioid pain medication with a rapid onset and short duration of action. Fentanyl is 50 to 100 times more potent than morphine. Quite a bit different than the DC Medical Examiner’s ‘quite the same as morphine’ in his report. 50-10 times more potent is hardly similar.

Some fentanyl analogues are designed to mimic the pharmacological effects of the original drug and may be as much as 10,000 times more potent than morphine. Fentanyl is also used as a recreational drug, leading to thousands of overdose deaths from 2000 to 2017.

Cyclobenzaprine: sold under the brand name Flexeril among others is a muscle relaxer medication used to relieve skeletal muscle spasms and associated pain in acute musculoskeletal conditions.

Mitragynine: is an indole-based opioid and the most abundant active alkaloid in the plant Mitragyna speciosa, commonly known as kratom; and biak-biak; Dry kratom leaf contains roughly 1.2–2.1% mitragynine.

Friends of Lucas emphasized that he was never into drugs, led a very disciplined life, and was in good health according to InfoWars reporter Paul Joseph Watson. It begs the question why the highly potent fentanyl and cyclobenzaprine would be consumed by Shawn Lucas? Let’s concede the tea opioid as a natural consumption unless denied by Shawn’s girlfriend who found his body.

However, the voluntary taking of the fentanyl and cyclobenzaprine would not be taken in this combination unless suicide was a motive. There is simply no evidence or circumstances in Shawn’s life to indicate a suicide, probably why the death was ruled accidental.

The only alternative other that accidental or suicide is homicide and it appears the DC Police Department may have been contacted by the DNC or another powerful party to make sure no such finding was entered. I hope this makes sense to you, because it obviously does not to the corporate fake news media that insist all this is nothing more than a conspiracy theory.

Here’s the thing, I do believe there is a conspiracy but between the DNC, the corporate fake news media and likely the DCPD. The one burning question in my mind is motive. Shawn is an activist and a process server by trade.

The service was videotaped and the person who appeared on the tape receiving the service did identify herself as ‘Becca’ and did acknowledge that she could accept a service on behalf of the DNC and Debbie Wasserman Schultz. Shawn was alone with the cameraman Ricardo O. Villalba. There was no person named Brandon Yoshimura present on the service.

I have no love for the DNC and Lord knows they have a list of evil deeds and criminal wrongdoing bigger than a New York City telephone directory. There is no need to manufacture criminal activity. Unless some additional facts emerge, this mystery will continue to linger.

Nonetheless, an investigation must be conducted for there is surely a case to be made for murder, but by whom and why? The actions of the DNC raise further questions for they are certainly treating Shawn as an enemy and their actions are dubious at best.

Regardless, there does not appear any motive for the DNC to kill Shawn Lucas based on the available evidence. I think all murders and questionable deaths must be investigated based on the value and importance of human life. We do need to find who killed Shawn Lucas, Seth Rich, Vince Foster (remember him?) and John Ashe. John who?

John Ashe, an ex-UN Official who “accidentally” crushed his own throat and died a week before he was scheduled to testify against Hillary Clinton, her Foundation, the DNC and the democrat party. The growing list of murders and deaths associated with the DNC and Hillary Clinton certainly are piling up, but these are all just ‘conspiracy theories’ so nothing to worry about, right?

Article: Shawn Lucas Cause of Death Revealed: He Was Drugged With Fentanyl, Cyclobenzaprine, Mitragynine

Article: FRIENDS OF DNC-LINKED SHAWN LUCAS “FREAKED OUT” BY HIS DEATH

Video: You Got Served

Article: Shawn Lucas Cause of Death Still Unknown as Clinton’s Campaign Lawyer Tries to Move DNC Lawsuit into the Weeds

Comey Kept the Russian ‘Illusion of Collusion’ Alive for Democrats and Media
Hey Deplorables, Act Now or We Lose This Nation Forever
Get a Good Whiff of FBI Director Comey