President Trump, you must take deliberate action to put down the insurrection against the United States of America by the democrat party, deep state and DC establishment. We have surpassed the point where obstruction became treason.

We must get back to the people’s business by aggressively implementing the agenda that got you elected. The first part of this agenda is to mandate the following:

Immediately terminate Johnny DeStefano, as White House Head of Personnel who is deliberately holding up the temporary or provisional status of the appointment you made to the WH staff that will be terminated on May 23rd unless made permanent. Replace with a person who will immediately make such appointments permanent. Use your power to make your picks permanent.

Establish a Secret Special Prosecutor to aggressively go after deep state personnel leaking classified information to the press. This Special Prosecutor and their team must have the highest security clearances to audit the servers, computers and devices as well as any and all domestic surveillance independent from the agencies and departments in question.

This authority shall have clearance over all levels and branches of government to determine the sources of leaked information and those individuals responsible. The IG system and department heads are either unable or unwilling to seriously address this issue.

Terminate Reince Priebus, Chief of Staff and Sean Spicer, Press Secretary including all staff hired by them. Most leaks coming from the White House came from these two.

Reinstate most if not all the more than 200 generals and high ranking military officers illegally purged from government by Barack Obama. Stage One of the military coup d’état was removing those loyal to the United States as a sovereign nation leaving only those committed to the globalist transformation of this nation to lead the military. This created a severe high risk situation for the stage two globalist coup d’état.

Restore the National Security Council to reflect personnel loyal to the sovereignty of the United States government and remove all those globalist generals seeking to undermine the same.

Convene a special military counsel or special prosecutor to charge with sedition all parties seeking to overthrow this duly elected President from performing his constitutional duties of office. Those being charged are to include members of Congress; members of the media actively complicit or supportive of sedition; members of the judiciary abandoning the rule of law and preventing lawful execution of the office of President by denying the Constitutional Powers so delegated to the President by the Supreme Law of the land, the United States Constitution. 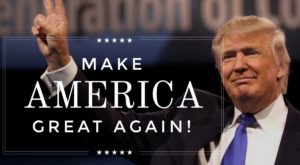 The second part of your mandate is to aggressively pursue the Make America Great Again agenda!

Replace Andrew McCabe, Acting FBI Director with one without the impropriety of bribery, extortion and other possible criminal acts, improprieties and ties to Hillary Clinton and the Clinton Foundation. This case is before the FBI and Andrew McCabe must immediately recuse himself from any involvement.

Empower the police and law enforcement across this nation at all levels of government to aggressively enforce the law and put down all those using street violence and property destruction to advance sedition and totalitarianism. Law and order must be restored.

Make any individual or organization receiving federal money that involves itself with organizing, advocating or engaging in violent protest, riots or the destruction of property immediately ineligible for federal money for a period of 10 years.

Make any individual or organization funding or contributing money directly or indirectly to other individuals or organizations organizing or advocating for violent protest, riots or the destruction of property immediately accountable for damages caused by those receiving resources, instruction, tools, weapons or items used for such immediately accountable for all damages to persons and/or property.

Use your bully pulpit to appeal to Congress the need to elect new leadership in the House of Representatives and the Senate. The current Speaker of the House Paul Ryan and the Senate Majority Leader Mitch McConnell are unwilling to advance the people’s agenda who voted you into office. They must be replaced immediately.

Use Executive Orders to circumvent a hostile and seditious Congress bent upon insurrection and sedition.

A clear majority of the people of this nation support you regardless of the fake news and fake polls the enemies of state use as manipulation tools to advance their schemes for the overthrow or transformation of our American system. This has gone too far. The time for half measures is over.

We need to restore sanity now.