Putin and Trump G20 Meeting Only Real Story in Hamburg 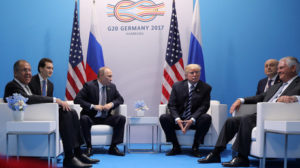 President Donald J Trump represented true American values at the G20 Summit in Hamburg, Germany. The best thing to come out of the G20 is the foundation being forged between the United States and Russia. In fact that may be the only purpose for President attending the G20 in the first place.

The G20 is a globalist meeting of the new world order participants and we must realize that NATO, UN, IMF and World Bank (WB) are the globalist tools of the cabal and international central banking system to impose itself upon the deteriorating sovereignty of the nations. Russia is the sole American ally on that front.

The fact that President Trump sees no real reasons or benefits for America to embrace such gatherings is a reaffirmation of the rejection of globalist tyranny and the planned implosion of national sovereignty. That’s why ex-Islamic emperor Barack Hussein Obama is shadowing President Trump and undermining his meetings with foreign nations and warning America on July 4th of the dangers of patriotism and nationalism.

Speaking of Obama, is it not a violation of American law and/or policy to have private citizens sabotage and undermine meetings before and after President Trump meets and negotiates with those same heads of state? This is treason by an ex-American president and is it not required for them to obtain permission from the White House to do so?

I guess the exceptions for lawless Islamic globalist Obama still apply. What do you think would happen if George Bush did this to Obama when he left office? Goodness, they even imposed having Obama, prior to his inauguration, handle the financial crisis during the lame-duck session to accommodate the will of the incoming administration. I see this only applies to delusional totalitarian globalists before and after.

Obama must be read the riot act that further interference in the international stage be met with strong legal intervention or temporary detention by the Trump administration. Such sedition and treason must not be tolerated. America is right and proper in its rejection of globalism subterfuge initiatives like climate change, cap and trade, lopsided trade agreements and subjection of national sovereignty to globalist laws, policies and organizations.

Protectionism is a term used and abused by globalists to mean foregoing trade deals that benefit and protect sovereign nations. Our rejection of the Paris Accord is a brilliant move for it has little to do with climate and everything to do with a Marxist wealth redistribution scheme on a global scale. America is already years ahead of every nation in the realm of environmental-friendly energy and industrial production.

Much of the pseudo-science used to drive man-made climate change is debunked for it was another scheme invented by totalitarians to justify globalism. The underlying premise is nations must not engage in any practice that benefits them equal to or greater than the global community as a whole. America stands alone on this front but that is what true leadership is all about.

Steel is the hot-button commodity of the international trade issues and President Donald Trumps’ reinvigoration of the American steel industry is a wrench in the globalist machine. The globalist scheme is to strip away the American manufacturing base across all major industries and to redistribute her wealth to nations that will create manufacturing to benefit their global trading blocs.

The globalists are irrational and economically injudicious when it comes to how wealth is created. Their forte is how to redistribute wealth created by others. Hardly the kind of people you want in vital decision-making capacities.

The position of the globalists is all their agreement is ‘irreversible’ pragmatically if not absolutely. The left can only rule by ‘force and mandates’ based upon ‘power and control’ rather than free enterprise and market forces.

The best thing coming out of G20 is the basis for a foundation of cooperation and eventually trust between the United States and Russia. The globalist position requires WW3 with Russia for there are staunch Russian sovereignty and a future threat to globalism. Therefore now is the time to rid the world of their military power so globalism is not derailed by Russia as it begins to emerge.

Do not believe for a moment that North Korea is not empowered by the globalist cabal to be a thorn and distraction in the rib cage of President Trump. His positive meeting with Vladimir Putin is a huge threat to the globalists.

President Trump’s sovereign America and his ability to craft ‘deals’ make him a huge threat to the globalism agenda. The globalists need America and Russia hostile to and at odds with one another. They cannot tolerate the two major staunch national sovereignty players and top two military powers on Earth have a peaceful relationship and allying themselves to fight terrorism and globalism.

Globalism and Islamic terrorism are the two major threats to international peace and stability. The Russians to my dismay did not appear to offer any meaningful objections to the 3-Sea trading bloc or at least not in public. It seems that the two main issues of concern, Syria and North Korea have come to terms in principle between Russia and the United States. 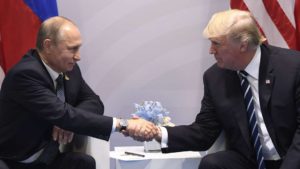 One 2½ hour meeting between Trump and Putin was all it took to agree in principle on a Syrian cease fire and non-interference with North Korea. This is making the lamestream media and democrats become further disjointed if you can believe that. Democrats and lamestream media are now proclaiming Trump as Putin’s puppet and nothing can be further from truth.

The globalist democrats, GOPe and fake news corporate media see all their schemes unraveling and crimes unfolding where they … not Trump … must go on the defensive and fight to hold on to their power to stay out of prison. Their end is near and why they are more lethal than ever.

Let’s hear early warnings from the wounded ‘swamp creatures’ who see their power crumbling on display for the world to see. The Vatican is warning about ‘dangerous alliances’ and a distorted American vision of the world. That’s rich considering the Pope is a communist, globalist and child sex trafficker lashing out at a disintegrating cabal empire.

The Pope complains of immigration and borders because migrant hordes are what feeds the child sex trafficking rings and that represents more power and money than the ordinary person can fathom. Pedophilia is rampant in the world and Catholicism.

The fake news New York Times is at it again ‘propping up Bernie’ a.k.a. the Zombie Russian collusion story for that fraudulent story is all they have against President Trump. It is really fun to watch the implosion of the corporate lamestream media.

I read the story and include the link below. Because members of the Trump Team met with an ‘adoption attorney’ that has links to Russia they want to impugn misdeeds. Is it really strange for an adoption attorney to have connections with many nations including Russia regarding adoption? More fake news and false alarms coming from the purveyors of fake news. No doubt CNN is all over this ‘breaking’ fake news story? This merry-go-round has no off switch.

Article: Dem Rep Swalwell: Trump’s ‘Silence’ on Russia’s Account of Trump-Putin Meeting ‘Tells Us Everything We Need to Know’

Article: Tillerson: Putin Asked Trump For Proof Of Russia’s Interference In The 2016 Election

Article: Putin: Trump On TV Is “Very Different From The Real Trump”

Tags:
G20globalismPutinTrump
« Historical Krasinski Square Speech By President Trump
The War for Our Survival is On! »
Share