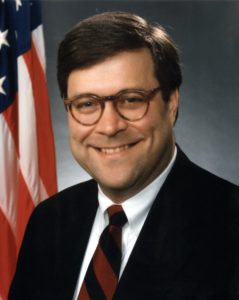 President Donald J Trump announced today he nominates Bill Barr for the Attorney General position and Heather Nauert for US Ambassador to the UN. This article will focus only upon the Bill Barr nomination.

If confirmed by the Senate, Bill Barr will return to running the Justice Department after serving as Attorney General from 1991-1993 under George HW Bush. Barr strongly supported Jeb Bush in 2016 by giving tens of thousands of dollars to his presidential campaign; is a longtime Washington DC power player currently employed as counsel at the Kirkland & Ellis law firm.

Kirkland & Ellis is one of the top grossing law firms in the world and represented Jeffrey Epstein in his child sex-trafficking with minors case; and regularly represents Bain Capital (Mitt Romney) in various controlling interest private equity transactions. Notable attorneys from Kirkland & Ellis include:

President Trump appears to like recruiting from Kirkland & Ellis, for in addition to Kavanaugh, 11 Kirkland attorneys now serve in the Trump administration and if confirmed Barr will make 12. Kirkland, through its employees, was a top-20 contributor to Barack Obama in 2008, giving at least $493,735.

The firm’s attorneys leaned heavily Democrat (77%) in their political contributions, giving $579,976 for the 2008 election cycle. Thought a little background on Kirkland would be useful here.

While in the Bush administration, Barr oversaw and worked with the then-head of the Justice Department’s criminal division, Robert Mueller, now the special counsel leading the investigation into Trump’s campaign and its alleged ties to Russia which to date have proved frivilous for this is indeed a ‘witch-hunt” as President Trump likes to call it. The politically astute prefer coup d’état as the most apt descriptor for what is happening to America since the inauguration and subsequent appointment of Mueller by the deep state conspirators.

Bill Barr in my judgment may not the best person for the AG position. For those of us seeking to bring justice to “The Swamp” as President Trump has promised throughout his campaign and presidency, nominating Barr is a move in the status quo direction. Barr is ex-CIA just like George HW Bush who appointed him AG after serving as DAG from 1990-1991. Although Barr is on record as saying the DOJ should have done more to investigate Hillary Clinton; was not James Comey also on record making sililar statements? We all know how that worked out.

The far-left Daily Beast reports that a former intelligence official and Washington legal insider said Barr “is more a Rosenstein than a Whitaker” and “I don’t think he will view the career people at the department as the enemy. I think he will listen to them and work with them.” That sounds like a quote one would expect to hear from a shadow government coup d’état co-conspirator. Coming from the ‘beast” … I’m sure it is.

Far-left demonrat politician Senator Richard Blumenthal (D-CT), says he will seek Barr’s word not to interfere with the Mueller investigation. That’s it? red neon flags go up. When marxist socialist members of the obstruction party become silent and permissive, it is a warning of impending peril and a very dangerous omen.

My rule of thumb is when the enemies to the Republic do not have their standard tantrum and now infamous derangement fit about a President Trump nominees, its because they too are probably a swamp creature themselves and not a threat to the entrenched shadow government and globalist elite. Judging by this quick look into Bill Barr, it appears that assessment is validated.

I referenced a few far-left fake news propaganda articles and every one of them was cordial, mild in their criticism and nearly endorsing nominee Barr for the position. When the Swamp does not object … PANIC!

Breitbart Article: Lindsey Graham: ‘I Will Do Everything in My Power’ to Confirm William Barr as Attorney General