It seems not only Google is in the business of redefining long established meanings of words like that of fascism to mean a right-wing system of governance. The shamefulness and guile of the extreme left globalists in doing this to provide cover for the far-left violence of the terrorist groups’ antifa and BAMN rioters and anarchists is atrocious.

The Trump administration is now trying their hand at redefining the term ‘win’ and ‘victory’ as well. They are doing this with the repeal and replace vote and the $1.07T budget resolution funding the government to the end of the 2017 fiscal year. 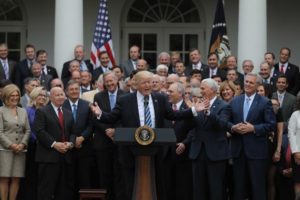 Defeat is Not Victory. The budget does not providing funding for any Trump administration campaign promises to the American people for security and safety. That’s right, none, zip, nada, zero money and yet it is heralded as a win and cause for celebration by the Trump White House. Huh?

If getting nothing is cause for celebration I wonder what kind of party Donald Trump would have thrown if he lost the election? How can you claim victory for something that was already budgeted during the Bush II admin but never implemented by Obama?

I hope this was not what Trump meant when he said we’d grow tired of winning because I’m really tired of the same old smoke and mirror games played by DC politicians. 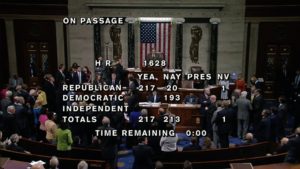 Same thing with the ‘repeal and replace’ of obamacare power-grab which still remains a federal government seizure of the American healthcare system. This American Health Care Act (AHCA) bill passed by a vote of 217 to 213 in the House on Thursday May 4th and was not a full repeal of the ACA but is the RINOcare GOPe version of government controlled healthcare.

Only 20 republicans voted no and they are the only ones who should not be ‘primaried’ come the 2018 mid-term election. These courageous souls are the only non RINO republicans true to the values of small government, fiscal responsibility and Constitutional restoration. The US Constitution prohibits government being in the healthcare and insurance business.

What’s in the House Bill? 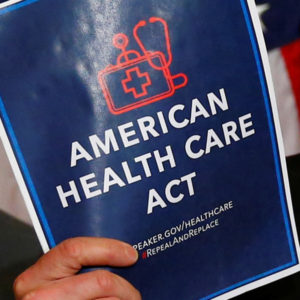 Chairman Kevin Brady has prepared a document entitled, “REPEAL AND REPLACE OF HEALTH-RELATED TAX POLICY” that details the changes to ACA. The summary below highlights some of the significant changes:

Democrats are 100% extreme-left Never Trump Totalitarian Socialists, Communists and Marxists. They are remnants of a defunct 100% un-American political party engaged in the active overthrow of America from within. That makes democrats traitors.

We must throw out the window the typical merits or demerits on democrat versus republican voting for or against bills during this Trump administration. The democrat party is dead for they vote no to everything republican regardless of how good it is for America.

They are irrelevant and can only be expected to hurt America in all they do. The Republican Party is effectively America’s traditional two-party system with the democrats being the extremist anti-America party. The globalist totalitarian RINOs are the traditional leftist that the lamestream fake news media inappropriately calls ‘moderates’ versus those on the right who are Conservatives and Libertarians.

The Republican Party in effect has become the new two-party system in American politics. The democrats are now the Marxist, Socialist and Communist third party. Because democrats have imploded with millions leaving over the last decade where they are totally dependent upon fraud to win elections the time is ripe for serious election reform to combat fraud. Perhaps it is time for the Republican Party to split and thus create a legitimate three party equilibrium with no dominance existing in any of the three. A digression but fodder for future discussion.

RINOcare is a partial repeal and replace bill that goes to the Senate where is will be scored by the CBO and will almost certainly haggle over changes to the House bill between the two republican factions. That process will likely take about a month before it comes to a vote then goes back to the House for approval.

House Conservatives and RINOs said they based their votes at least in part on the assurance that the Senate would change the bill. Not for nothing but it just doesn’t get more ‘punk’ than that. That is certainly rolling the dice on significant legislation for the RINO Senators are certain to create havoc and make RINOcare Obamacare-light if they can.

Conservative Senators like Rand Paul of Kentucky; Mike Lee of Utah; Ted Cruz of Texas; and Tim Scott of South Carolina may push the AHCA further to the land of common sense and stretch the bounds of what republicans can pass with a simple majority under the Senate’s budget reconciliation procedure.

RINO Senators like Susan Collins of Maine; Lisa Murkowski of Alaska; and Rob Portman of Ohio will want to restore some of the cuts to Medicaid and reintroduce pre-existing condition waivers or elimination however absurd that is. Is there any wonder why premiums skyrocket?

Other RINO Senators like John McCain of New Mexico and Lindsey Graham of South Carolina are certain to be wild-cards for they are Never Trump so who knows which camp they will settle in.

One thing is certain; if Obamacare ‘repeal-replace’ AHCA becomes RINOcare the republicans own it outright. Unlike with Obama, the fake news media will be jumping all over any mishaps and making even a band-aid shortage to appear catastrophic.

The far-left democrats’ rent-a-riot anarchists create violence in the streets to create the ruse to allow the extremists to feign ‘support’ for their vain cause of globalism. They are fooling nobody capable of critical thought in spite of the hard-left propaganda media writing as many fake news stories that are needed to perpetrate the myth of ‘grassroots’ support.