The team of Paul Ryan as House Speaker and Mitch McConnell, R-KY as Senate Leader were extremely complicit during the reign of Obama and only feigned resistance when they knew it would not mean anything. Whenever they had the power to stop emperor Obama they refused to exercise such power.

In fact one could rightly claim they were more on the Obama democrat implementation team then they are with President Trump, a member of their own party. Paul Ryan as speaker of the House controls the purse strings meaning he controls which government programs gets funding or not. Ryan was never truly elected as House Speaker but rather appointed by Reince Priebus when he was Chair to the RNC: Republican National Committee. All three are establishment meaning there is a barely negligible difference between democrat and republican.

The republican establishment is known by two acronyms: RINO which means Republican In Name Only; and GOPe which mean Grand Old Party establishment. Not all who are GOP and necessarily establishment for GOP is an epithet for the Republican Party since 1880 and its seems the RINO GOPe is ostensibly owned and controlled by the cabal, central bankers and globalists who will only allow leadership positions be awarded to the establishment. Though most GOPe hide behind a conservative mask, they are the proverbial wolf in sheep’s clothing or shall we say globalist left in conservative clothing.

Conservative republicans on the other hand are those in the party who remain true to the party platform for small federal government; responsible fiscal conservatism; low debt; free market capitalism, preferably laisse-faire capitalism; free enterprise; deregulations; labor union restrictions; strong national defense; sound immigration policy; social conservatism; traditional family and values as espoused by Judeo-Christian teachings, pro-life and most certainly to uphold, protect and defend the US Constitution which has been shredded by the establishment democrats and republicans over the years. Conservatives now represent about 30% of the republican party.

The Case Against Ryan 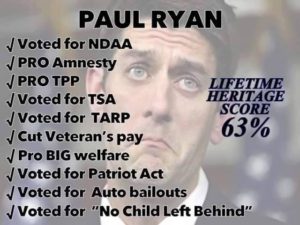 There are many egregious acts of Paul Ryan as Speaker going back to his replacement of John Boehner during the Obama administration. The GOPe theme song could easily be from the Who, Won’t Get Fooled Again when they say, “Meet the new boss, same as the old boss” for that is certainly the case with Paul Ryan replacing John Boehner. There is supposed to be an election for Speaker, but Reince Priebus as RNC Chair could not take the chance a conservative would be elected so he essentially installed Ryan as Speaker and cut a deal for the House to vote for him.

Paul Ryan implemented essential Obama legislation that came to his desk and even gave $1.1 Trillion for his budget which was more money than what Obama requested. He passed the egregious NDAA plan that has anti-free speech provisions contained within it that legalizes the abuses and suppression of free speech we see happening with Facebook, Twitter, Reddit, and especially Google who removes and buries independent news and information from the internet.

Ryan also refused to endorse and support Donald Trump, even after the election for Ryan did much evil with the democrats during the lame duck period to pass illegal legislation contrary to the Constitution and America like NDAA; had positions on trade contrary to American interests; holds many progressive, globalist world views; agrees with democrats more than he disagrees with them; is stalling on the repeal of Obamacare and will not accept the conservative replacement of Senator Rand Paul to replace obamacare.

Let’s talk about the Rand Paul plan for that holds to the promise of keeping the federal government out of the unconstitutional healthcare business. I support the plan but think an HSA account should be available to every citizen regardless of whether they have health insurance of not. The HSA should be portable, transferrable, tax-free accumulations and distributions when used for health related services.

Paul Ryan and the hoard of RINO and GOPe want Obamacare light contrary to what Americans have been railing against since its illegal passage. We should seek a person from the House Freedom Caucus like Daniel Webster R-FL or Mark Meadows, R-NC. It would be an uphill battle but we must displace all GOPe from leadership positions including RINO Mitch McConnell R-KY, the Senate Majority Leader who is dropping the ball in getting President Trump nominees approved in a timely manner. We’ll talk about his evils in another article.

Tags:
housepaulryanSpeaker
« President Trump’s 1st Congressional Address
How We Got to Trump; It Began in 2008 … Sort of »
Share