President Trump’s first Joint Congressional address was brilliantly conceived and flawlessly delivered leaving the obstructionist democrats dumbfounded. The speech went a few minutes beyond one-hour with the theme being the Renewal of the American Spirit that drew frequent standing ovations, some even from the democrats.

Though many in the media are proclaiming a “toned-down” President Trump that is simply more fake news because it is precisely what he has stated since the beginning of his campaign. With millions of Americans watching this speech the lamestream media had to say something to justify their false reporting on the President’s agenda, otherwise the egg-on-their-face would be seen by die-hard remnants of their perpetually diminishing viewership.

The message was positive, uplifting and focused on unity which President Trump delivered directly to the obstructionist democrats whom at times were compelled to rise in a standing ovations with the Republicans. President Trump began with an acknowledgement of this being the final day of black history month and that more work on civil rights remains to be done. He immediately illustrated that despite our division on policy, we are one in our condemnation of hate and violence toward religious bigotry and violence.

Unity and strength is the legacy of America and the torch of liberty and justice is in our hands as a light to the world as a “new chapter of American greatness is now beginning.”  He went on to make the case for rebuilding our diminished military and providing for our veterans so we can remain strong, proud and free as we draw near our 250 year milestone.

President Trump touched on his agenda of making this nation a great economic power again and to restructure our tax system for businesses and individuals to strengthen the middle class; to repeal and replace the imploding Obamacare healthcare system; rebuild our eroding and violent inner cities; securing our borders from lawlessness and drugs; bringing an industrial and manufacturing base back to this country; rebuild the nation’s infrastructure; and to put American citizens first.

He articulated the anger of the American people in our loss of national greatness for a globalist lie. The American protest that began with a quiet whisper grew into a loud chorus and became an earthquake in 2016. That’s an understatement for the globalist democrats were so stunned by that cataclysmic blast they have not yet recovered.

This election victory put the globalist left into a perpetual obstructionist and violent mode to depose of this American victory and negate the will of her people. After the delivery of this speech the globalist dream for a New World Order is going to be set-back to square one for its just not going to happen with President Trump at the helm. 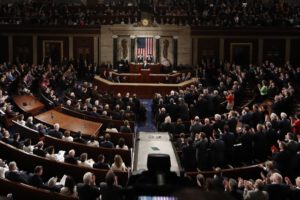 The address put the hate, divisiveness and violence we have been living with every day since the election squarely on the laps of democrats, precisely where it belongs. President Trump reaffirmed to slim down a fat, gloated, overly regulated and corrupt government with common sense provisions that sent the big government globalist democrat heads reeling. Yes, they will most likely remain the obstructionist, negative and complaining victim mentality of the slothful left. But now it’s their turn to lose, and lose they will.

The brilliance of this speech was having the emotional component to support the logical and rational policies being proposed. President Trump put a face on the victims of lawless and irresponsible immigration policies like open borders, poorly vetted and non-vetted persons from known terrorist nations. We now got to see the families and loved ones of the Black, White, and Hispanic victims slain by illegal aliens and Islamic terrorists who were vetted and non-vetted under our system.

The Fort Hood terrorist who murdered unarmed soldiers was himself an Islamic US officer; the San Bernardino terrorists were Islam immigrants vetted under our system; and the soldier who was killed on a mission was slain because of a leak; the terrorists ambushed the mission. President Trump disarmed the obstructionist’s false narrative of racism and the litany of slurs by showing the reality that globalism open border and reckless immigration policies destroy the multi-cultural families of the very people they dishonestly proclaim he hates.