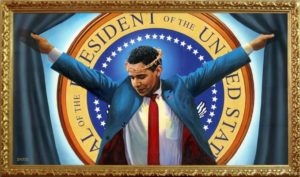 If you though the inauguration of Donald J Trump finally put an end to the reign of terror by Barack Obama and his globalist minions, think again. The fallacy that Obama is remaining in DC to protect and defend his legacy is the stuff criminals tell the innocent. His only concern is completion of the “Fundamental Change of America” into the globalist aspiration for a New World Order managed through the United Nations, UN; financed by the central banks, the International Monetary Fund, IMF and the World Bank.

The plan was for Obama to pass the globalist baton to criminal extremist, child trafficker and pedophile Hillary Clinton but she lost the election in spite of massive fraud that began with the Democrat Primary Election she stole from Bernie Sanders and continued up through the General Election. The Clinton machine with the help of the DNC and George Soros used violent agitators planted at Trump rallies to support their false narrative. Soros’ business enterprises influenced 16 states to purchase electronic voting machines owned or controlled by him.

The fraud in the 2016 election was massive and far greater than earlier elections. Clinton stole five states from Donald Trump and amassed between 20-30 million fraudulent votes depending upon whose analysis of the election you consider. Bribery and intimidation of the Electoral College failed to overturn the election as did George Soros’ financed and Barack Obama organized violent riots and protests that began immediately after the election that continues to this day.

Since Clinton’s humiliating loss we witnessed an absolute mental breakdown by the globalist left and the launching of their many criminal enterprises designed to bring down President Donald J Trump to prevent him from assuming office and then to remove him from office.

There were three soft coup d’état attempts:  the first was political which we discussed above. The second was judicial to erode the Constitutional powers of the presidency; and the third was the Intelligence Community (IC) coup via leaks of top secret and classified intelligence that forced the resignation of General Flynn from his position as National Security Advisor. Obama, AG Lynch and DNI Clapper conspired and restructured the 17 intelligence agencies days before leaving office in a manner that all but guaranteed these sensitive leaks.

Who really thinks all this is due to an election loss? Even the most naïve and non-political mind can figure out there must be some other reason driving these acts other than the mere loss of a presidential election. They’re right because there is.

Obama is not remaining in DC to preserve his legacy because he could care less. He is here to orchestrate and manage a violent overthrow the United States Government. Crazy you say? If the above facts are not sufficient for you, let’s take a look at a few more. 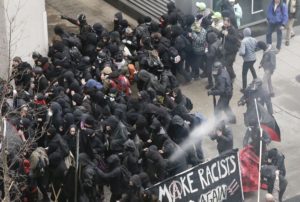 Obama is working with and through more than 200 groups, and is now arming 30,000 anarchist agitators many of which are funded by taxpayer dollars and George Soros. They include Organizing for America that morphed into Organizing for Action, OFA which was initially founded by the DNC immediately after the Obama inauguration but is now directly operated by Obama. The Obama group “Indivisible” created the handbook progressives use to violently oppose Trump and to overthrow America.

Funding was provided indirectly through tax dollars and now by the Obama Foundation whose donors read like a who’s who of globalist subversive individuals and organizations. Since the Clinton Foundation is now shut down and under several criminal investigations including FBI, another enterprise was needed to fill the void to advance the globalist cause.

Some state democrat organizations like that in Louisiana led by Executive Director Stephen Handwerk, are now pushing back on Obama for calling his 30,000 plus agitators to arm themselves with automatic weapons he once condemned to violently escalate in a violent coup against the United States of America. With the 9 counts of fraud on Obama concerning his certificate of live birth, his and Michelle’s phony social security numbers and his sedition in the active coup of America it begs the question, “Why is this man not indicted for treason?”

American Patriot Daily: Democrats Turn Their Back on Obama

Guidebook: The Indivisible Handbook of Resistance