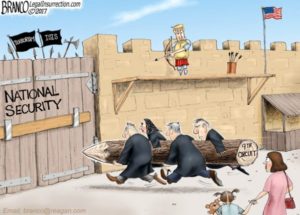 Since the election of President Donald J Trump we have come to learn just how toxic America is and just how badly the Trump antiseptic is needed. The antics of the irrational globalist left are reminiscent of a dictatorial banana republic and not a civil society ruled by law. Goodness, the principal delinquents of the law are those who are charged with writing, defending, upholding and enforcing the US Constitution, the supreme law of the land.

Far too many judges have long ago abdicated their duty to interpret the Constitution and laws as they are written. The frequency of judges imposing their privately held policy preferences on the nation are increasing at an alarming rate … exponentially some might say. So what are we to do?

FACT: The Number of Supreme Court Justices is Determined by Congress

The US Supreme Court 9 justice standard has only been in place since 1869.  There have been times where the number of justices was as low as six. Apply a term of office to the Chief Justice for 10 years that is appointed by POTUS; and selected from the active SCOTUS judges unless there is a vacancy. Perhaps it’s time to increase to the number of associate judges to 11?

FACT: Congress Generally Determines the Jurisdiction of the Federal Courts

In some cases, however – such as a dispute between two or more US states – the Constitution grants SCOTUS the original jurisdiction, an authority that cannot be stripped by Congress.

SCOTUS’s historical caseload is almost entirely appellate in nature, and the Court’s decisions cannot be appealed to any authority, as it is the final judicial arbiter in the United States on matters of federal law. However, the Court may consider appeals from the highest state courts or from federal appellate courts. The Court also has original jurisdiction in cases involving ambassadors and other diplomats, and in cases between states.

Nonetheless, SCOTUS must remain accountable to uphold the Constitution as does all lower courts. What happens when SCOTUS fails to uphold its Constitutional mandate as it has in many of its decisions? The following case is laid out to reign in an activist federal judiciary at all levels. The time for judicial reform has come.

FACT: Congress Has Significant Constitutional Discretion to Determine the “Shape and Structure” of the Federal Judiciary

The following should be considered when performing a congressional change to the shape and structure of the judiciary.

They serve until their death, retirement, or conviction by the Senate via House impeachment. By design, this insulates them from the temporary passions of the public, and allows them to apply the law with only justice in mind, and not electoral or political concerns. However, this limitation presumes they do not act in a renegade and activist manner of ruling and much abuse has been done.

The Constitution mandates lifetime appointments to SCOTUS justices only. This does not preclude congress from establishing a long term appointment of say 20-25 years to the lower courts. This should be given serious consideration especially if no congressional oversight is implemented.

FACT: The Courts Only Try Actual Cases and Controversies

This means that a party must show that it has been harmed in order to bring suit in court. The courts do not issue advisory opinions on the constitutionality of laws or the legality of actions if the ruling would have no practical effect. Cases brought before the judiciary typically proceed from district court to appellate court and may even end at the Supreme Court, although the Supreme Court hears comparatively few cases each year.

FACT: Federal courts enjoy the sole power to interpret the law, determine the constitutionality of the law, and apply it to individual cases.

FACT: The Supreme Court of the United States is the highest court in the land and the only part of the federal judiciary specifically required by the Constitution.

All SCOTUS Justices are nominated by the President, confirmed by the Senate, and hold their offices under life tenure. Since Justices do not have to run or campaign for re-election, they are thought to be insulated from political pressure when deciding cases. Justices may remain in office until they resign, pass away, or are impeached and convicted by Congress.

This section of lifetime appointment has eroded into unelected and unsupervised and unaccountable judges on SCOTUS and the judiciary into performing activism based on political and personal preference and not the law, specifically the Constitution.

Case law has incrementally served to shred the Constitution and give ground to judicial activism and corruption. We have seen since the election of President Donald Trump blatant tyranny in all branched of federal and state government including judicial treason and sedition.

FACT: In almost all instances, SCOTUS does not hear appeals as a matter of right; instead, parties must petition the Court for a writ of certiorari.

It is the Court’s custom and practice to “grant cert” if four of the nine Justices decide that they should hear the case. Of the approximately 7,500 requests for certiorari filed each year, the Court usually grants cert to fewer than 150. These are typically cases that the Court considers sufficiently important to require their review; a common example is the occasion when two or more of the federal courts of appeals have ruled differently on the same question of federal law.

If the Court grants certiorari, Justices accept legal briefs from the parties to the case, as well as from amicus curiae, or “friends of the court.” These can include industry trade groups, academics, or even the U.S. government itself. Before issuing a ruling, the Supreme Court usually hears oral arguments, where the various parties to the suit present their arguments and the Justices ask them questions. If the case involves the federal government, the Solicitor General of the United States presents arguments on behalf of the United States. The Justices then hold private conferences, make their decision, and (often after a period of several months) issue the Court’s opinion, along with any dissenting arguments that may have been written.

The role of SCOTUS is open to Congressional re-structure and Congressional Judicial Oversight of individual justices for custom is not law. Judicial oversight must never be due to dissatisfaction with the ruling of law. However, there is ample evidence that decisions based on activism in rendering an interpretation that bends, twists or maligns law to meet political, personal or privately held policy considerations has occurred. Such practices are indeed subject to oversight by what I and America hope to see in a newly created Judicial Oversight Committee.

Article: Solutions for America: The Role of the Courts

Article: What is the proper Role of the Courts?

Article: How the Supreme Court Went From Judicial Review to Judicial Activism

Article: Reigning in the Radical Liberal Judiciary; Who Guards the Guardians?