BREAKING NEWS: Senator Chuck Grassley earlier today re-released a significantly less redacted memo he sent to the DOJ and the FBI. Listen to the Sean Hannity Special Report aired on Fox News as a separate broadcast from his regular show with Sebastion Gorka, Sara Carter and Gregg Jarrett.

The The US Senate Judiciary and the Crime and Terrorism Committees are referring Christopher Steele to the Department of Justice for investigation of fraud, concealment, material false statements and misrepresentation contained in the fake dossier used by the FBI to obtain spy warrants on the Trump Campaign.

The committee chairmen reveal Christopher Steele lied under oath based upon information obtained by sworn statements presented to the British courts in litigation.  Mr. Steele either lied to the FBI; the British Court; or in the classified documents reviewed by the Committee which contain materially false statements. One way or another Mr. Steele lied to one or more parties and the fake dossier he crafted.

This referral is asking the wolves and conspirators who knowingly signed off on the illegal spy request of US citizens to investigate themselves. Documents reveal that DAG Rod Rosenstein personally signed one or more FISA applications for spying on Carter Page and the Trump campaign.

The memo reveals that British ex-spy involved himself in the US Presidential campaign at the request of the DNC, the Hillary Clinton campaign, and ‘Never Trump’ operatives embedded in the US Government like Senator John McCain R-AZ, Fusion GPS and the law firm Perkins Coie.

In addition to Christopher Steele, James Comey, then Director of the FBI signed one or more classified application requests to the FISA Court (FISC) that contradict briefings he made to the aforementioned committees and his public testimony in January 2017 to the Senate Select Committee on Intelligence. 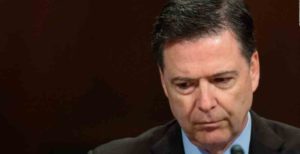 James Comey testified that he had briefed President-Elect Trump on the dossier allegations, which in his own words were “salacious” and “unverified.” This is in stark contrast to his signature on the statements presented to the secret ‘FISC’.

The use of hostile foreign actors, including Russian involvement in preparing critical content to the Steele Dossier is in itself a crime regardless of the content. Mr. Steele was scheduled to appear again in British court earlier this week but was a no-show.

Mr. Steele is an ex-MI6 ‘spook’ trained on becoming a ‘ghost’ to evade detection from government surveillance and by all accounts has gone dark and sought refuge in who knows what God-forsaken corner of the Earth. He may be fleeing for his life because he will implicate the conspirators of the US coup d’état to bring down the duly elected President of the United States of America.

The body count of anyone associated with testifying against Hillary Clinton is very high. Let’s see if the FBI and the DOJ not only continue to cover-up their crimes but engage in scorched earth tactics and their ill-fated coup. The heat from high scrutiny is upon them from Congress, Fox News and the New Media. Lord knows the LameStream Media is utterly corrupt and complicit in this coup d’état.