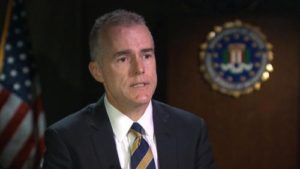 Confirming Clinton operative Andrew McCabe as acting FBI Director is going from the frying pan into the fire. How could such recklessness take place under a Jeff Sessions DOJ and Donald Trump Presidency? Especially when candidate Trump states Hillary cronies and bundlers committed a criminal act by funneling money to McCabe’s wife.

We just confirmed a corrupt swamp creature as head of the nation’s ‘premier’ law enforcement agency. Let’s review a few facts on McCabe and his wife Jill’s scandal, extortion and corruption with Hillary Clinton and Terry McAuliffe. My fear is his sole purpose as acting Director is to guarantee that evidence against Hillary Clinton and the Foundation disappears, goes missing or ‘accidentally’ gets shredded.

Here’s why I believe that. Democrat operative Andrew McCabe is currently ‘under review’ for his involvement in the Clinton scandal after his wife received $805,000 in a Hillary Clinton fundraiser funneled through close friends and allies of Clinton in Jill McCabe’s failed 2015 political campaign.

Democrat Jill McCabe was asked to run for the Virginia state senate in 2015 by the top democrat officials and is most likely a pawn in this game of political chess. Jill received money from the state democrat party; a Hillary Clinton fundraiser she funneled through a PAC run by far-left democrat operative Terry McAuliffe, a close friend and ally to Clinton; and top Clinton bundlers who all contributed significantly to her campaign.

That’s an obscene amount of money being poured into a losing state race, is it not? Yet it only represents around ⅓ of all contributions. When seeking to see where other campaign contributions come from it is a common ploy to use a team of activists to go through all the ‘dead’ registered voters and make small contributions in their names so as not to raise any red flags.

Let’s follow the timeline because despite claims to the contrary, the Clinton email scandal broke prior to Jill McCabe agreeing to run for office. Remember she ran at the behest of the Virginia state democrat party leaders. This scheme had Andrew McCabe in mind right from the start. Let’s track the timeline sequence using the Thompson-Reuters timeline, link provided below.

On July 10, 2015, the FBI’s Clinton email investigation formally begins, although it may have informally begun much earlier. Andrew McCabe’s Washington, DC field office provides personnel and resources to the investigation. At the end of July 2015, he is promoted to FBI Assistant Deputy Director, the number three position in the FBI.

On November 3, 2015, Jill McCabe loses the election to incumbent Republican Dick Black. Once the campaign is over, “[Andrew] McCabe and FBI officials felt the potential conflict-of-interest issues ended,” according to the Wall Street Journal. Really?

Hmm, being a member in good standing of the good ol’ boy network does have its rewards. Around a million dollars funneled through your wife’s failed political campaign and three major promotions to the top three FBI positions in two years and two months! WOW, that’s quite the fast track is it not? 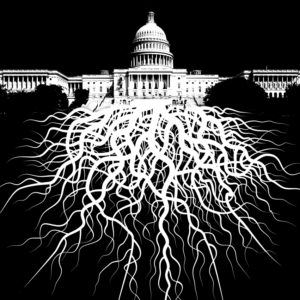 This is what’s known as the corrupt deep state swamp President Trump has vowed to drain. Did McCabe recuse himself from the Clinton and alleged Russian investigations? Of course not; what could possibly go wrong? McCabe was quite vocal in his dislike for Michael Flynn and Donald Trump. Some think he was the person directly involved in the Flynn dismissal.

The alleged ‘Russian collusion’ was a scheme hatched by the Obama regime shortly after the Trump election victory to cover-up the massive illegal spying activity and to sabotage the Trump Administration. All the key department heads are manned by deep state Obama-Clinton operatives loyal to the globalist end-game strategy that Hillary Clinton was ordained to implement.

No matter which way you care to slice it and dice it, the stench of corruption and bribery stinks to the high heavens. Andrew McCabe is currently under review by the Inspector General for the Department of Justice regarding his involvement and oversight in the Clinton and ‘Russian’ investigations. The IG has not yet submitted his findings.

Only in DC does garbage like this get called routine standard operating procedure. Why does President Trump or Jeff Sessions not have any problem putting McCabe in as FBI Acting Director? We’ve seen firsthand just how much damage can be done with the Sally Yates snafu.

This only makes sense if it is to fire Andrew McCabe for his involvement in the massive leak cover-up. Why else would someone rise up through the ranks like greased lightning? Sometimes the swamp gets drained in strange and mysterious ways while at other times it gets filled and replenished under the guise of draining.

Having McCabe in the top spot even for a brief period of time is very dangerous. With far-left obstructionists in leadership positions on both sides of the aisle mean that a lot of time will elapse between a nomination and confirmation. Having President Trump and AG Sessions sign off on McCabe is quite disturbing. It’s getting difficult discerning between the swamp creatures and those hired to drain it.

Article: The ‘There There’ in Gov. McAuliffe’s Donations to Jill McCabe

2018 Mid-Term Elections: Must Prepare Now if We Want to Drain the Congressional Swamp
Senior Executive Services: The Enemy Within
How We Got to Trump; It Began in 2008 … Sort of