A Deep State of judges, regulators, politicians, executives and corporations has secretly signed on to “A New World Order” where government is “disaggregated” into self-defined networks. From that point on, their pledges of loyalty to the US Constitution became optional and the shadow became the substance of government. 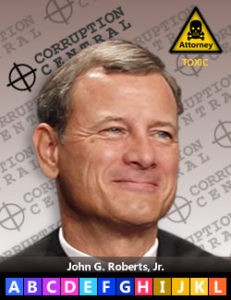 This is frightening to consider that judges are willing to subvert their oath to uphold and defend the US Constitution, the ‘Supreme Law’ of the land but that is precisely what has happened. These rogue Deep State ‘Shadow Government’ judges has assaulted, maligned, twisted, perverted and ignored this Supreme Law of the land to advance their totalitarian form of governance.

Four of the nine Supreme Court Justices including the Chief Justice John G Roberts, Jr. are members of this Deep State Shadow Government. Is there any wonder why our system of justice is perverted and Constitution undermined? Take a look at the corroborated Deep State Shadow Government Poster prepared by Americans for Innovation, a member of the American Intelligence Media network.

The staff at Newshawk Network extracted from this document members of the Judiciary that are active and current judges to prepare the following PDF document. You are encouraged to copy the link address and download a this PDF document to your computer for distribution on all your social media sites.

Some of the justices listed in this document have assumed an active role in the soft coup d’état levied against America by actively undermining and assaulting the powers of the President of the United States of America. These rogue justices have committed sedition and treason by usurping the powers reserved to the Executive Branch of government in their effort to illegally and maliciously overthrow a duly elected and sitting United States President.

The research into this shadow government has revealed (so far) 19 sitting judges who are active participants in undermining the United States of America’s Constitution. It is highly likely there are many other judges involved in this coup d’état and when research reveals more the judicial shadow government document shall be updated.

The very name of ‘shadow’ government strongly indicates stealth and secret operations for obvious reasons. Therefore shedding light on who these people are will go far in thwarting their efforts to usher in a new world order by first continuing to destroy our Constitutional Republic. The assault upon the Republic is not something new.

The assault started slowly and stealthily back in 1913 with three major legislative actions: The XVI and XVII amendments and The Federal Reserve Act. The creation of the income tax destroyed the apportionment taxation system to promote equity and fairness to prevent tyranny and totalitarianism. The XVI Amendment was the amendment designed to ‘Feed the Beast.’

Two months later the XVII Amendment was passed taking away the states’ rights of representation in the federal government through the Senate. Article 1, Section 3 of the US Constitution was in effect torn out and shredded and was the critical element to subvert the supremacy of the states and embark down the road of tyranny and a totalitarian form of government. The XVII Amendment ‘Annulled Opposition to the Beast.”

Later that year on Christmas Eve when most in Congress recessed for Christmas the Federal Reserve Act was signed into law in the dead of night by Woodrow Wilson, one of the most evil and destructive Presidents in the history of the United States … literally. Evil lurks in the shadows and President Wilson “Created the Beast’ also known as the Creature from Jekyll Island.

Jekyll Island, Georgia was the location of the secret meeting of international bankers, industrialists and corporate elites that usurped our nation’s currency and economy from the federal government into the hands of an international banking cartel. Just like the proverbial ‘frog in the pot’ that did not realize he is being boiled to death due to the gradual increase in water temperature.

Many in this shadow government shed its stealth wardrobe for they were so confident they would vault Hillary Clinton to victory in this end-game ‘checkmate’ they got sloppy and never covered-up their crimes. Now they’re scurrying like roaches when the lights comes on and getting quite desperate to terminate the Donald J Trump Presidency by any means necessary.

This attempt like all others will fail. Restore the Republic!

Book: The Creature from Jekyll Island

Article: SES – The Enemy Within

Article: The Deep State And The Shadow Government