Government Shut Down is 85% Fake News

The temptation to blame the far-left obstructionist democrats for an impending government shut down on April 28 would mean embracing fake news just for a ‘gotcha’ moment. While it may feel good to slam them with their own rhetoric that would make us like them … how repulsive!

Now that a non-extremist is occupying the Oval Office we see the other shut-downs in government were also fake news based upon the hissy-fit democrats not getting their way. It’s happening again now except it’s a republican sitting in the Oval Office and they are being the obstructionists.

While the Trump administration believe a shutdown is unlikely, they are being boy scouts and making whatever preparations are needed should one occur. I think a shutdown may not be the worst thing for the reality is only 15-17% of government services are stopped when a budget resolution is not reached. 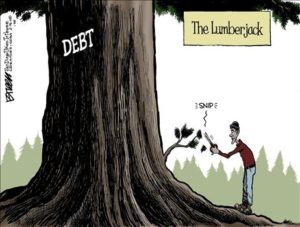 For those of us truly fed-up with the hissy-fits and posturing whenever a penny is removed from government; or worse when far-left extremists like Chucky Schumer have a tantrum because a 4% increase in spending is a cut because they wanted 6% can now be exposed as hypocrisy.

On April 28, 2017 unless a budget or a resolution is passed non-essential services will begin to shut down operations. Wait a minute; are not both House and Senate run by republicans?  So what’s all this talk about a government shut down?

Well, yes we do have a republican President and Congress … sort of because they are run by republicans in name only or the infamous acronym RINO. Paul Ryan, House Speaker and Mitch McConnell, Senate Majority Leader run the House and Senate respectively, but when it comes to budget issues it is Paul Ryan who holds the purse strings.

I guess he tries to sound tough only when a republican holds the Presidency because he cowered to extremist Obama and the ire of the communications wing of the DNC the fake news LameStream media. RINO ‘democrat’ extremist Paul Ryan may be holding up passage of the budget due to President Trump’s demands to include funding for the border wall and a debate over money for an obamacare insurer subsidy program, both of which virtually assure the spending bill will not pass the House and Paul Ryan.

Sigh, if only Paul Ryan was so tough on Obama … but he gave the Islam Emperor more money than he asked for to win favor from the fake news media and a public ‘thank you’ from Obama.  On this accord Ryan deserves the lion’s share of the blame but Trump also deserves some as well. 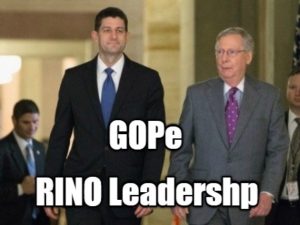 Regarding the debate that is still underway to repeal and replace – I cringe every time I hear the term replace because the government has no Constitutional authority to be in the healthcare or the insurance business. Nonetheless, Trump’s insistence in taking ownership of a failed obamacare plan or Obamacare-light plan that almost passed Congress is problematic. Both continue to subsidize the purchase of insurance rather than providing actual access to services is a legitimate sticking point.

Let’s explain that one a bit further. The fake news media is deceiving America (are you surprised?) by how they frame the issue. You will hear fake news specialists often pose the question something like, “But what about the poorest among us who will no longer be able to afford coverage if we repeal Obamacare? That is not fair to the poor.”

Holding up the budget because the wall is too costly is a lie and nothing more than pure politics and posturing on the side of the extremist GOPe and democrats. RINO Paul Ryan is full of himself because illegal aliens invading this nation are costing $148B annually as opposed to the wall which realistically will cost $22B as a one-time capital expense.

For details on the true ‘non-politicized’ illegal alien annual costs see the NHN article in References. There are consequences to losing an election and the democrats and GOPe who are the ‘Never Trump’ group that voted for Hillary Clinton must come to grips with reality. To date neither seems capable of doing so.

America, don’t you think its past time we start sending adults to Congress to represent us? The majority of republicans elected to Congress are RINO. The reality is we are being governed by ‘republicrats’: democrats and democrats-light (RINO). Honestly we can only blame ourselves for sending the same group of clowns to represent us to Congress.

When Matt House, spokesman for Chucky Schmucky Schumer says, “Everything was running smoothly until the administration moved in with a heavy hand” must be living in the same alternate universe as his boss. Gee, I seem to remember how we got obamacare!

Democrats have been whining, protesting, rioting, complaining, undermining, obstructing and generally having the most colossal temper tantrum in the history of mankind since they lost the election to President Trump.

So what is the true impact of a government shutdown? The major impact is nobody will be able to go to a national park during that time. Oh the horror! With government being oversized and bloated it may be a good thing to have the non-essential services and departments close for a time.

A furlough of federal employees never happens immediately but only after a prolonged period of time has elapsed. You’d never know that listening to the fake news LameStream Media. Obama obscenely and systematically increased the federal workforce, pay and pensions in his reign of terror well above that comparable to the private sector. 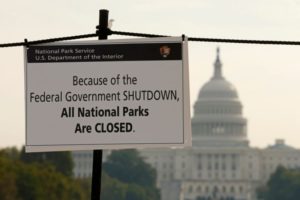 Government shutdown is a misnomer for when only 15-17% of the government is affected how can you call that a shutdown? Truth is its mostly a national parks shutdown. To get an accurate picture of the true impact of a “limited operational shutdown’ a more accurate way to describe what is really happening, we need to move away from the propaganda spewed by fake news media, democrats and GOPe all of whom have private agendas to advance.

If you’re looking to do an internet search on the topic yourself, be prepared to scroll through many pages before you come to an agenda-free article that is open and bias free. Remember Google is the premier search engine that drives other search engines and their algorithm deliberately obscures articles and websites not to their liking.

Google is party to the corporate fake news purveyors and own You Tube. They toe the proliferation line of fake news along with Fakebook, Twitter and the rest of the fake news industry. The globalist and the left are making the truth harder and harder to find. It’s out there, you just need to be patient and persistent.