President Donald Trump announced that he will fulfill his campaign promise to build a nearly 2,000 mile long wall (not a fence) along America’s southern border with Mexico.

The idea is that a physical barrier will act as a low-cost deterrent, and will help stem the flow of illegal aliens entering America via Mexico—the hope is that once an illegal alien (particularly a criminal migrant) is deported, they won’t return.

The plan is simple and time-tested—China’s Great Wall did its job, so did Hadrian’s Wall in Roman Britain—and yet it’s come under fire from the mainstream media.

They claim that the wall will be prohibitively expensive, that illegal aliens contribute to America’s economy (so there’s no reason to deport them), and that the wall won’t work.

They’re factually wrong on all accounts—let’s look at the numbers. The first question we must address is very straightforward: how much would it cost to build a wall along the Mexican border?

We don’t know for sure (construction costs rarely align with initial estimates), but we have a few good estimates.

Senate leader Mitch McConnell said Congress estimates the wall will cost $15 billion at most—he said it would likely fall within a range of $12 to $15 billion.

However, according to more recent information acquired by Reuters, the border wall will cost $21.6 billion, and will take roughly 3.5 years to build.  This is according to a document from the Department of Homeland Security.

It’s probably our best current estimate, and this article will proceed under using this cost assumption.

Either way, the cost of the wall pales in comparison to the cost of illegal aliens in America.

In fact, illegal aliens cost just the state of California over $30 billion a year.

I encourage you to read my detailed report on the subject: it breaks the costs down comprehensively, in a way this article won’t.

How Many Illegal Aliens live in the US?

In all honesty, no one really knows—they’re undocumented.

All I can give you are some estimates.  On the low end, Pew Research estimates that the number of illegal aliens in the US is roughly 11.1 million—this number tracks fairly closely with official government figures.

On the high end, estimates peg the number of illegal aliens in the US at roughly 30 million people.  This number has been proposed by conservative author Ann Coulter, who based the figure off banking and remittance payment records, government service demand, and migration projections from ICE.

Frankly, I think the math makes much more sense with the high estimate, but in the interests of neutrality, this article goes with the low estimate (11.1 million).

The Annual Cost of Illegal Aliens In America: $148.3 Billion

Illegal Aliens are expensive, despite what open-borders and open-market activist groups like the Cato Institute think.

Not only do illegal aliens cost the government far more far more than they pay in tax, but they increase competition for work, which drives wages down and causes unemployment for citizens who can’t work for $2 an hour (due to obvious legal impediments).

There are 3 basic types of costs I included in this estimate.

Expenses incurred at the federal level total $28.6 billion, according to the FAIR report.

This category includes a much broader range of expenses which I won’t go into here.

Again, you can get a sense of what this looks like by reading my cost analysis on California.

Once adjusted for inflation, as per the Bureau of Labor Statistics calculator, the US government spends roughly $125.2 billion per year on illegal aliens.

This is slightly mitigated by the fact that migrants contribute $14.9 billion in federal, state, and local taxes (inflation-adjusted).

The final major category is remittances (money transferred from someone working in the US to their family abroad).

For this calculation, I assume that remittances are being sent by first generation immigrants (legal or illegal), and that they are equally likely to remit.  I include remittances in my calculation because it’s a financial drain on the country—the money evaporates from the economy, never to be spent domestically or support local businesses.

According to Pew Research America lost $133.6 billion in remittances in 2015—$136.9 billion when adjusted for inflation.

Given that there are 40 million foreign-born American citizens, and roughly 11.1 million illegal aliens (again, according to Pew), this means there are 51.1 million people sending remittances.

Given this ratio, we can guess that illegal aliens send $38 billion from America every single year.

Of course, the wall wouldn’t impact illegals from a different continent who overstayed their visas, but when combined with reinvigorated border security, it would certainly help staunch the bleeding.

When all is accounted for, illegal Aliens cost America $148.3 billion per year.

“But We Need Illegal Aliens to Grow The Economy”

Some argue that we need illegal aliens to grow the economy and maintain our quality of life.  They’re wrong.

The only people that benefit are the rich.

Will The Border Wall Work? Yes.

The final question is whether or not Trump’s wall with Mexico will work, because if it doesn’t, the whole argument is pointless.

Of course it will work: it worked for the East Germans (Berlin Wall), for the Hungarians, and for the Israelis—say what you want about Netanyahu, he knows how to build a wall.

Netanyahu says in a tweet on Jan 28 2017, 9:55am, “President Trump is right. I built a wall along Israel’s southern border. It stopped all illegal immigration. Great success. Great idea.”

The evidence for this is overwhelming.  I won’t spoon-feed it to you, but here’s a starting point. 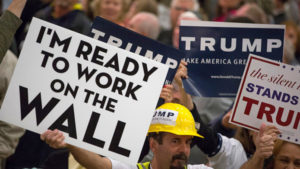 A sturdy wall, combined with competent border patrols is 90-99% effective.

What this means is that Donald Trump’s wall is a good investment.  It will help ensure that once illegal aliens (particularly criminals) are deported, they won’t be coming back.  This will save us a ton of money in the long run.

Illegal aliens are costing this country $148.3 billion every single year.  If we can even cut that down by a third, the wall’s more than paid for itself in a year.

Also, make sure you check out my full report on illegal aliens in the US: I cover everything from economics, crime, culture, and morality.

Illegal Immigration Must Be Stopped: Here’s Why