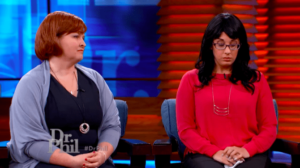 Dr Phil McGraw had the audacity to expose truth on pedophilia and child sex trafficking by the elites on network television and is now paying the price. The story told by “Kendall” on the March 21, 2017 airing is eerily similar to the fact-pattern exposed in Pizzagate. Kendall reveals how she was sold into sex slavery as a child by her mother and and became yet another victim of an international child sex trafficking ring for the globalist elite.

Dr Phil also invited on the show Michelle Stevens, a recovered survivor of child sex trafficking as aid and support for Kendall. The expose caused quite a stir with the new world order elites and now Dr Phil has become a target.

Trying to find a full episode to include for this article was no easy task. The full episodes is scrubbed from his YouTube channel with only short clips available. One week following the pedophile and child sex trafficking broadcast, the Dr Phil show was cancelled from Dutch TV for “other programming preferences.” Yeah right.

The initial video I watched was a full screen video and not pic-in-a-pic as it is below. I’ve looked but could not find the original version that I watched. Seems many other sites also have this video scrubbed and no longer available for viewing. Seems to me the power elites are running scared for this may be getting too close to home.

If this were truly fake news as the lamestream media wants us to believe, would the powers that be really be going through all this trouble to suppress and censor all evidence of pedophilia and child sex trafficking? I don’t think so either.

My fear is Attorney General Jeff Sessions may have been read the riot act from the powers on high and backing away from the high level privileged elite arrests. There is sufficient evidence contained in the Anthony Weiner laptop for many high-level DC arrests according to the NYPD.

Though 1,500 low-level arrests were made since President Trump was inaugurated justice demands we follow this trail to the top. No complaints with the arrests made for every pedophile behind bars saves how many children from victimization?

Nonetheless, there have been more than 500 children that have gone missing in DC in 2017 so holding everybody’s feet to the fire is essential. This brazen perversion and exploitation of our children needs to end now.

The DC police are perpetrators and cannot be relied upon; and FBI Director James Comey is a major impediment of justice being served. Comey has long been a political hack in protecting the Clinton Clan from having charges leveled against them since his days as a federal prosecutor. He was not appointed FBI Director by Obama in 2013 for nothing.

It is certainly not farfetched to see the horrific impact upon a nation when corrupt judiciary are pedophiles and refuse to prosecute those involved in child sex trafficking. It is happening in the Netherlands and the pulling of the Dr Phil show from the air one week after his show on the survivor of a lifetime of sexual abuse since a small child.

Let’s also take a look at the story of a whistle-blower and victim of child sex-trafficking in the Netherlands tell his story. The globalists that control YouTube, Vimeo and most internet video sites is scrubbing and deleting first-hand accounts from the internet. Free speech under assault globally.

The English-speaking Dutch media NL Times from the Netherlands also is reporting many pedophilia cases implicating political leaders, including a mayor and justice official being brought to court by alleged victims of child sex-trafficking. This is further illustrates that pedophilia is happening at high levels of Dutch society.

The same is happening here in America and has been for a very long time.

In this video above Georgia Senator Nancy Schaefer was murdered in 2010 allegedly by her husband who committed suicide after his deed … at least that’s the official report. If pedophilia and child sex trafficking were truly fake stories then why are so many ending up dead and eye-witnesses and survivor stories being scrubbed from the web?  We need to wake up and address the realities of this ghastly criminal activity taking place in America with DC at the heart of this crime syndicate. How much outrage must we endure with member of Congress, judges, attorneys, and even the White during the Obama Administration with some evidence dating back to the Reagan-Bush White House engaging in this horror.

We need to stop hiding our hearts and open our eyes to this distressing reality and abomination inflicting our children.