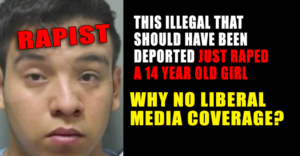 Two illegal aliens gang rape a 14 year old girl at her Rockville, Maryland High School, a suburb of Washington, DC. The two men were arrested for rape and will be charged as adults for their horrific crime. The two men, Henry Sanchez, age 18 and Jose Montano, age 17 are being held without bond due to a high flight risk.

The men were enrolled at the Maryland high school as Freshman in the progressive liberal city of Rockville. Rockville, Maryland has been functioning as a sanctuary city for many years as does Montgomery County and both are seeking formal recognition as such. The high school also considers itself as sanctuary for illegal alien students.

On January 30, 2017 the County published a letter assuring residents of their long standing policy that, “Police do not enforce federal immigration policy” due to the inauguration of President Donald J Trump. This ghastly crime is the natural result of such illegal and grisly policies.

The state of Maryland is culpable as well for it goes well beyond sanctuary policies by granting illegal aliens reduced in-state resident college tuition. The result is a massive demographic shift in the population which is the strategy of the globalist agenda. Destruction of the culture is the strategy to prepare for the elimination of national borders and major changes in local boundaries.

Fox News reports that in Montgomery County, immigrants and illegal aliens represent 51% of the population. The immigrant and illegal alien poverty rate is double (14%) that of native residents (7%). Schools are greatly struggling to teach the estimated 19 different cultures and languages the schools, counties and communities are ill-equipped to integrate.

The result is to substantially increase taxes to deal with the cultural chaos and the ensuing increased crime rate and costs associated with it. During the years 2014-2015, the county ignored ICE requests to detain 63 illegal aliens with prior criminal records in addition to the crime of being illegal aliens. 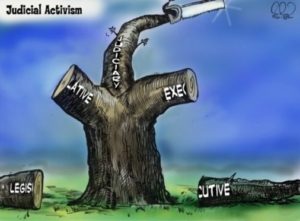 How is it that the globalist politicians, lawyers and judges waging war with President Donald Trump with their soft coup d’état to strip away the legal powers and rights of the President to protect the safety and lives of American citizens? Should the willing co-conspirator fake news corporate lamestream media also be held culpable for their refusal to report this appalling crime simply because it does not support the globalist narrative? Are we to become Sweden?

These illegal judgments impair, damage and harm Americans. Those victimized by these illegal prohibitions and sanctions must be held to account by the families having the right to file suit against those creating illegal restrictions from enforcing existing law.

This is a national security issue and federal courts and judges have no authority to usurp the powers granted to the executive and legislative branches of government. The blood of Americans injured by such reckless acts is on the heads of the judicial parties engaging in such sedition.  Such crimes are no isolated events and are widespread though being suppressed by the corporate fake news media with the sole exception of Fox News.