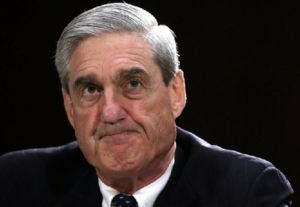 This Russian investigation is in reality a Trump only investigation. All actual and documented Russian collusion with the DNC, democrats, John Podesta, the Hillary Clinton campaign and her illegal activities of bribery, extortion and murder as Secretary of State. Of the fake news corporate media will prefer the ‘pay to play’ phrase to soften the crime and sweep it under the rug.

Why is nobody bringing up the fact that ex-FBI director Mueller went to Moscow to personally deliver a stolen uranium sample directly to Russian operatives on the Moscow airport tarmac? How can a person directly involved in the Hillary Clinton Uranium One deal be appointed to a Russian investigation?

Mueller is clearly a deep state operative just like the intelligence leaker and disgraced former FBI director Comey was. In all probability Mueller is in place to continue the cover-up of crimes Comey is no longer able to keep suppressed. Mueller himself colluded with Russia and expanded the investigation to further cover-up additional crimes by the Obama regime, the Clintons, Podesta, and the DNC.

I’m certain Mueller will want to keep this ‘fake probe’ alive for as long as Donald Trump is President and then prosecute President Trump after he completes serving his two terms in office. Justice demands that such treachery and possible illegalities by Mueller not go unpunished. He is obscuring crimes by his fellow swamp creatures from coming to light and works that none see justice.

I believe their arrogance in believing Trump could never be elected is equal to he will not finish his term because democrats will soon occupy the White House to restore the criminal enterprise to its prior status quo. That delusion is not going to happen; and if by some off chance it does happen, there will be a Second American Revolution by mainstream Americans.

This will not be like the domestic terrorist groups like antifa, BAMN, BLM and black panthers who are paid agitators. These will be true Americans fighting a tyrannical, oppressive and lawless government to restore order to chaos and legality to criminality at the highest levels of government.

Look how quickly the Donald Trump Jr email scandal vanishes from the media because Russian lawyer Natalia Veselnitskaya, an alleged spy who colluded directly with the Obama White House and Loretta Lynch to sabotage the Trump campaign. It was Loretta Lynch that allowed Natalia to enter the United States without a Visa for ‘special circumstances’ under a rare application of an obscure immigration rule.

Should we mention the fact that Natalia Veselnitskaya worked with democrats for years? That she also worked for Fusion GPS, the firm that produced the fake “Russian Dossier’ of Donald Trump in Moscow? Or that she met with John McCain in December of 2015 who incidentally is up to his eyeballs in the fake Russian dossier due to his hatred of President Trump?

Oh how the fake news media loves to point to John McCain as evidence of bipartisanship with their ‘both sides of the aisle’ knowing full well McCain is nothing more than an undocumented far-left democrat disguised as a republican. In fact Veselnitskaya was peddling as many in Congress she could meet with to release the assets of the oligarchs that were frozen due to the Magnitsky Act.

The peddling of the delusion of collusion by the media, democrats and never Trump GOPe is in fact opposite of truth. Russia had invested heavily into Hillary Clinton and wanted her elected to get a ‘return on investment’ so why would Russia take a chance with a political unknown? And all this after Obama had the most corrupt DOJ in American History?

Had it not been for some sleuthing by the real media and Billionaire William Browder in his interview with Martha MacCallum of Fox News, we’d never have the facts. When fingers point back to democrats all you hear are crickets.

The list of democrat crimes can go on and on and on with nary a word. These are real crimes with real documentation and real evidence but nada … the media is too busy creating and chasing Russia-Trump collusion ghosts making this witch-hunt a far-left Delusion of Collusion. Are any of you really surprised?

Article: Mueller Was Courier for Stolen Uranium to Russia