If Election Fraud is Fake News, Why Are Democrats in Pathological Denial and Filing Lawsuits? 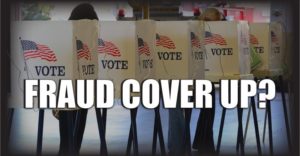 The President Trump Election Fraud Commission is like a spotlight shining into the roaches nest … massive scurrying, denials and lawsuits. There is ample evidence that election and voter fraud is massive throughout the United States and that Barack Hussein Obama won in 2008 and 2012 and the Hillary Clinton popular vote were all due massive fraud.

Methinks the left doth protest too much! A paraphrase of Queen Gertrude’s lament in the William Shakespeare play Hamlet, but oh how appropriate to describe the far-left democrats and their unhinged tax funded groups. The era of lawlessness for these extremists is drawing to a close yet they sue for their ‘right’ to defraud America?

What a shameful display of arrogance but then again are these not extreme leftist democrat organizations? What else should we expect from those who without fraud as a campaign strategy would probably lose every election they run in?

The far-left wants to claim Donald Trump won due to ‘collusion’ with Russia and at the same time deny there is any election fraud. They just can’t have it both ways. Of the many mental illnesses plaguing the extreme left, schizophrenia ranks high.

Breitbart News is reporting, “Multiple non-profits with links to left-wing billionaire George Soros pursue lawsuits against the newly established Commission on Election Integrity. So, who are some of these far-left groups suing? Let’s list four of the household names.

It is a common tactic by the far-left and Soros syndicates to have groups receiving his funds directly to give money to other far-left groups in an attempt to disguise the source of funding coming from Soros. The democrats are masters at fraud and deception. Most of the thousands of taxpayer and Soros funded groups operate as a criminal enterprise in concert with democrats, the DNC and even GOPe to advance far-left agendas.

A recent study by Just Facts, a New Jersey-based research group revealed that an estimated 5.7 million non-citizens voted democrat in the US elections in 2008 and 2012 giving victory to Barack Hussein Obama. Hillary Clinton also won the 2016 Election popular vote due to extensive fraud. It is estimated that 7 Million votes cast for Hillary Clinton were fraudulent with others stating the fraud could be as high as 15 Million.

The fraudulent illegal alien votes alone account for both election victories by Barack Hussein Obama. Other forms of election and voter fraud were not considered in the study. The Pew study reveals in 2016 that about 18 Million inaccurate and fraudulent voter registrations were active yet democrats are pathological in their obsession that voter fraud does not exist.

James O’Keefe of Project Veritas recently exposed CNN for their fake news reporting also went undercover to expose the massive election and voter fraud by the Hillary Clinton campaign and the DNC and produced a four part video series undercover the fraud. Part one is below and parts 2-4 is under references.

The 2012 Pew study on the States reveals the following:

2.75 Million People have “active” registrations to vote in more than one state;

1 in 8 voter registrations are deemed fraudulent as reported by Lou Dobbs of Fox Business.

Ken Blackwell, a prominent member of the President Trump Election Fraud Commission told Breitbart News in an exclusive interview, “This lawsuit is the latest attempt by the Left to kill this commission in its infancy by attempting to delegitimize its vitally important work. These are the same people who are demanding an investigation of Russia’s attempts to meddle in U.S. elections who want us to embrace the ridiculous concept of voters without borders. For any democratic nation, that amounts to a complete gutting of the rule of law. That’s what this lawsuit is: an attack on the rule of law.”

It’s tough to argue with Ken Blackwell on his points for he is spot-on. The leftists in and out of government are mounting a coordinated coup d’état against President Trump on all fronts: media with fake news stories to divert attention away from the truth; judicial with phony investigations, frivolous lawsuits and usurping Presidential powers contrary to the US Constitution; legislative with obstruction, phony impeachment proceedings and false attacks and investigations; deep state with their criminal leaks and false leaks; and shadow government who incite far-left groups to riot and file frivolous lawsuits.

These are all cumulative acts of sedition and treason. Why? The left have been operating as a criminal enterprise and must run interference to thwart President from undoing their globalist agenda which is an overthrow of the US government and Constitution; to cover-up their myriad of crimes like fraud, theft, extortion, murder, treason, pedophilia, human and child sex-trafficking. Please go to the NewsHawkNetwork.com website to read the stories with proof references.

Draining the swamp was never going to be easy but all of America should be in support of what President Trump seeks to accomplish in cleaning up DC. All these attacks on President Trump are smoke to ensure the guilty continue to run free. If we are going to Make America Great Again we must restore the rule of law to those who fancy themselves above the law and demand Justice for all, especially the elite.

Article: Ken Blackwell: ACLU Lawsuit Against Trump and Election Commission ‘Attack on the Rule of Law’

Article: Election Fraud 2016-Not Only True its Overwhelming