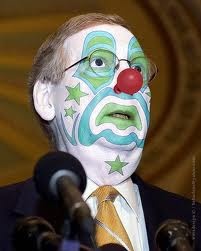 Paul Ryan has demonstrated himself time after time as an inept Speaker of the House and ditto Mitch McConnell as Senate Majority Leader. They are failing as Republicans leaders and cannot adequately manage majority positions and have failed miserably as opposition party when democrats led.

My goodness it seems like the democrats are the majority party, but then again that’s what you get with RINO: Republican In Name Only. I believe both parties have imploded and both parties are completely out of touch with the bulk of Americans. The two party system is dead.

Will someone please tell these two republican buffoons that America did not vote for their national agenda, they voted for the Donald Trump agenda. Paul Ryan won a local election to get them into the House of Representatives and Mitch McConnell won a state-wide election to the Senate. Neither one has the right to set the national agenda.

The republican leadership is not just RINO, they are globalists and there was indeed an election mandate against the globalism agenda in the 2016 Presidential Election. Somebody also needs to remind Donald trump of that fact as well.

What audacity for the republicans to NOT PROVIDE ANY FUNDING…

And to PROVIDE FUNDING FOR 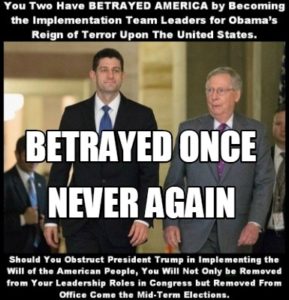 Get on the phone to you Congressmen in the House and Senate and let them know this is not what we voted for. Any republican voting for this democrat budget plan MUST be challenged come the mid-term elections in 2018. I am beside myself with this level of corruption and nonsense!

How dare these RINO republicans pull this on us again?

Enough! Pitchforks and Torches is what we need to bring to DC. A wise man told me something profound many years ago that rings true and always has. You only have to tolerate that which you tolerate.

I’m not tolerating this political nonsense from the Republican Party or the socialism and communism from the Democrat Party. They can both go to hell!

I don’t know if a third or fourth party is the answer or not. What I do know is this two party system has failed America. Out with republicans and out with democrats. It’s time for a political revolution but not before we lambaste those who have usurped and abused their power and abused the citizenship.

It’s time for these swamp creatures, and yes, they are all swamp creatures to be the recipient of some abuse. So politicians, as you walk from and go to work, keep looking over your shoulder … your constituents are looking for you and want answers. We the people greatly outnumber you and we are coming for you and will not leave empty-handed. We will get what was promised one way or another.

You betrayed us for the last time. Sucks to be you.

Article: Budget Betrayal Reveals Everything You Need To Know About Phony Republicans

Article: Why Do We Vote Republican? What Trump Must Do to Avoid More Disastrous Budget Deals

Article: Run Over By A Parked Car: Trump And Republicans Cave On Budget

Article: Trump’s Budget Betrays The Voters Who Elected Him

Article: As Trump budget Plans Fade, Republicans Brace for War – With Each Other