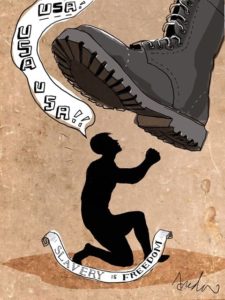 September 14, 2017 President Trump signs anti-free speech “Hate-Speech” bill into Public Law 115-58. Now the government can investigate you and arrest you for not only expressing thoughts ‘they hate’ in public including online but you are subject to investigation if you are white and you are merely accused of being a ‘hater’ regardless of truth.

After a cooling off period I have no doubt public law 115-58 can and will be used to outlaw Christianity, Conservatism and any opposition to the ‘globalist’ agenda to remove the United States as a sovereign nation. How this tyranny has

This bill specifically mentions and identifies “White Nationalism” as hate speech that may be investigated and prosecuted by the federal government as a hate crime. The law specifically targets the white race only making this a racist bill and a clear violation of the US Constitution. There’s been a lot of that going on since the lawlessness of the Obama regime carrying over into the Trump Administration.

Any group targeted by the federal government may be deemed a hate group and those advancing their ‘hate’ will be rounded up. We’ve witnessed the weaponization of federal agencies like the IRS, BLM, EPA and others to go after political enemies using the full power and strength of the federal government.

The end of liberty draws nigh. Being White and a Nationalist that opposes the globalization agenda is now a hate crime! We elected Donald Trump to do and avoid what again? Remind how and why this is an improvement over having the criminal Hillary Clinton elected president? Her body count continues to rise with each passing day it seems.

The bill specifically mentions Charlottesville as the trigger. Unfortunately Charlottesville was a staged event instigated by the far-left globalist and tyrants to pound yet another nail into the Liberty coffin. There were cointelpro and agitprop operations to instigate the incidents that even a cursory analysis of the players involved and the myriad of videos reveal.

The bill mentions the deaths and names the two police officers who were killed when their helicopter mysteriously crashed. There was little to no mention of them by the media and absolutely no inquiries made about the helicopters video footage of the event never revealed. Some speculate that their video is the reason the copter went down. No word on any investigation of the crash or release of the video taken.

Public Law 115-58 specifically targets ‘white’ individuals and groups while specifically excluding actual violence and hate by BLM, Antifa, BAMN, black panthers, SPLC and other leftist groups espousing hate and violence against the white race. These groups are directly and indirectly responsible for the murder, maiming and injury to people and law enforcement over the past year with nary a word.

How many millions of dollars in the destruction of public and private property are they responsible for? What value do you place on human life? All this is eerily omitted from the bill because the victims do not fit the narrative. No outcry or call for bills over the street violence at Baltimore … Chicago … Dallas … Berkeley … Portland and others?

This bill violates the first Amendment of the United States Constitution in that not only does it restrict and criminalize targeted speech it goes further to target only the speech of those of the white race. Just how much tyranny are the people of this nation expected to bear before they stand up to boldly proclaim Enough! … No More!

The Constitution grants the right to peaceably assemble but the violence, death and destruction by those of the far-left and races other than white seem to somehow obtain the ‘right’ to violence and destruction as a legitimate expression of discontent. Tyranny is legitimate rights being trampled are punished and lawlessness rewarded. Tjis nonsense must end and it must end now!

It is not surprising that 47 of the 56 cosponsors are tyrannical, totalitarian democrats and ‘independents’ that align with democrats. The Republicans cosponsors are a Who’s Who of RINO, GOPe tyrants. The list is available at the link under references.

This law only targets the white race and those whose political views are contrary to the globalist agenda. Its intentional vagueness will only lead to tyrannical abuse if not repealed by our new President in 2020. Here is some direct text from the bill that is extremely problematic from a legal sense (emphasis added):

(A) the President and his administration to–

(i) speak out against hate groups that espouse racism, extremism, xenophobia, anti-Semitism, and White supremacy; and

(ii) use all resources available to the President and the President’s Cabinet to address the growing prevalence of those hate groups in the United States; and

(B) the Attorney General to work with–

(i) the Secretary of Homeland Security to investigate thoroughly all acts of violence, intimidation, and domestic terrorism by White supremacists, White nationalists, neo-Nazis, the Ku Klux Klan, and associated groups in order to determine if any criminal laws have been violated and to prevent those groups from fomenting and facilitating additional violence; and

(ii) the heads of other Federal agencies to improve the reporting of hate crimes and to emphasize the importance of the collection, and the reporting to the Federal Bureau of Investigation, of hate crime data by State and local  agencies.

The entirety of this bill is disturbing but especially (7)(B)(i) where is specifically identifies the WHITE RACE and other groups by NAME to be investigated not for crimes committed but for being white and accused of beinh associated with one or more of these so-called ‘hate’ groups. Who defines what a ‘supremacist’ is? Does it require anything more than being called a supremacist? … or NAZI … or KKK?

Being a constitutionalist is nationalist for the Constitution and the Bill of Rights speaks of sovereignty, free speech, and inalienable rights for all citizens. That political position is deemed ‘hate’ if one is white, believes in LEGAL immigration, citizenship, secure borders, pro-sovereignty, pro-constitution and pro-bill of rights. Any of these positions is all that is required to be targeted for investigation by the federal government and referred for investigation by state, county, city and municipalities.

We see right before our eyes the deconstruction of the United States of America into a tyrannical totalitarian state … and President Trump signs this into law? This is criminal and this will not stand. Our thoughts, ideas and opinions are now hate crimes if the federal government says so. How far the USA has fallen from liberty.

Tags:
hate speechinstitutional racismnationalismPL-115-58racism
« WTC 911: What Do You See?
America Says, “Shame On You NFL” »
Share