Sebastian Gorka, a former counter-terrorism analyst for Fox News and National Security Editor for Breitbart who joined the Trump Administration as a counter-terrorism adviser, will be leaving the White House in the coming days according to Vivian Salma, Associated Press staff writer. As it turns out this story was widely reported but is fake news according to Breitbart.

It turns out that these sources had inaccurate information. So did the unnamed “administration officials” who talked anonymously to CNN, which published a similar report. The AP newswire story is picked up by most news sources so it seems these fake news reports all feed into one another. 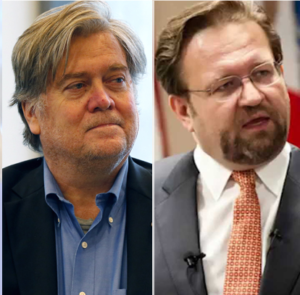 Gorka like Bannon was denied security clearance by McMaster to attend the National Security Council after he was charged last year for allegedly carrying a weapon he was licensed to carry at Ronald Reagan Washington National Airport. This is a continuing effort by the far-left “Deep State Globalist” operatives to sabotage conservatives and prevent nationalists in the Trump administration from having a voice on the NSC.

These following deep state operatives are all Obama appointees and led by General Joseph Dunford, Chairman of the Joint Chiefs; Admiral Michael S. Rogers, Director, National Security Agency; and General David H. Petraeus, prior CIA Director who all established that the globalists would seize control of the President’s National Security Council by any means necessary. When investigating leaks these Obama appointees are the place to start.

General McMaster is committed to removing all conservative advisers to President Donald Trump on the NSC who may pose a challenge or threat to the deep state Military Industrial Complex’s goal for a new world order. Sebastian Gorka is targeted to become the latest casualty of such efforts. The attempted removals are all connected to the illegal spying operations on Donald Trump and his key advisers since 2015.

Since co-opting President Donald Trump to the globalist platform for America’s role in implementing the NWO agenda, notice the leaks have mysteriously subsided as have the investigations into deep state leaks and spying activities. Funny how that works, isn’t it?

All the conservative and nationalist advisers are targets and the plan is to silently drop them one-by-one. While conservative Steve Bannon is still advising President Trump, General McMaster has removed his security credentials for no apparent reason other than he represents a significant threat to the globalist agenda.

Steve Bannon is effectively ‘iced out’ by General McMaster and the actual removal is all but a fait accompli. Will Steve Bannon survive the far-left globalist assault? Should he not whatever hope one had for a true reversal of the Bush I and II, Clinton and Obama globalism initiatives you can kiss goodbye for it will not happen without Bannon and his allies advising President Trump.

Sebastian Gorka authored Defeating Jihad: The Winnable War which is a New York Times bestseller. His proper understanding of the true threat of Islam and being an ally of Steve Bannon are threats to the globalist agenda and why they want them removed from the Trump advisory team. We already have too many good people falling away from Trump’s ear and too many evil bastards whispering in it.

Sebastian Gorka was an effective critic of the Obama regime and his pro-Islam stance. The Military Industrial Complex is pro-Islam for Islam is a ‘useful idiot’ to help destroy nationalism. That is why any Islam nation ruled by secular governance that suppresses radical Islam are opposed by the US and UK since the 1950s.

We saw that with Reza Shah and Mohammad Reza Shah of Iran who blame the Brits for the rise of Islam and backing the overthrow of secular rule until Ayatollah Khomeini became Supreme Ruler of Iran in 1980; the assassination of Sadat gave Egypt Mubaric and now Khairat el-Shater, a Muslim Brotherhood puppet as Egyptian President. Saddam Hussein suppressed radical Islam in Iraq and Muammar Gaddafi ditto in Libya since Reagan.

These rulers were all deposed unjustly. We see it continuing with attempts to depose secular leader Bashar al-Assad of Syria and the main reason why his regime is considered an enemy. The chemical attacks of 2013 and 2017 were not due to Assad but covert operations by the UK and US to depose him. 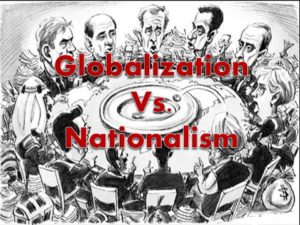 A key globalist strategy is to overwhelm the national identity and culture of western nations through the disproportionate immigration from nations difficult or impossible to assimilate like Islam. Illegal aliens invading the culture are also welcomed by globalists.

For globalism to take root nationalism including the economic and currency ‘sovereign nation’ model must be destroyed. The EU is the current model for globalism and why Brexit and nationalist Marine Le Pen represent a grave threat to globalism and must be demonized and defeated.

Donald Trump was seen as the champion for the nationalist revolt against globalism, but the recent words of President Trump proclaiming he is both a nationalist and a globalist betrays the nationalist movement. It is paradoxical to proclaim both and by doing so you are neither, only an opportunist for political gain.

It is unlikely that France and the UK can lead the international revolt against globalism for they lack the international strength and leadership to do so. The globalists are led by the US military industrial complex who assaults all nations that oppose globalism.

What does it tell you when the US enemies are staunch nationalists? And those transforming into globalism are all globalists demanding WW3 against Russia? It means the world is upside down and those who were once our enemies may not be now.

The UN, NATO, IMF, World Bank and Central Banks are not forces for good for they are the globalist Knights, Bishops, Rooks and Queen in the chess match for global control. Unless Donald Trump repents, this international globalism vs nationalism chess match may soon end with globalists checkmating the nationalists.

Breitbart: BuzzFeed Scoop: Sebastian Gorka Not a Nazi or Anti-Semite

NHN Article: US Trying to Instigate War with Russia?