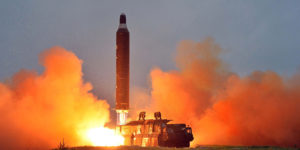 April 28, 2017 North Korea fired another ballistic missile today that was destroyed moments after launch. The missile is believed to be a short-range KN-17 land-based solid-fuel missile fired from a mobile launcher at Pukchang airfield. The missile’s capability could only reach targets in South Korea.

This provocation comes one week after NK put on a live fire display further antagonizing US forces and their allies, China and Russia. It created a response form President Trump to launch an ICBM test from the mainland that traveled 4,000 miles before landing harmlessly in the South Pacific.

On April 15th North Korea also had a test missile destroyed in the same manner immediately after launch. The United States is not acknowledging that the missile launch was terminated via any US weapon system, but the facts and circumstances of both missile tests strongly indicate the destruction was due to CIA cyber-warfare technology detonating the missile seconds after launch.

The United States Pacific Command will neither confirm nor deny the existence of such a cyber weapon and whether one was used assuming it does exist. However, Sir Malcolm Rifkind, Chairman of the Intelligence and Security Committee under Prime Minister, David Cameron confirmed the April 15th missile destruction was due to a CIA created cyber-weapon. The missile’s destruction precisely mimics that April 15 cyber-attack.

President Trump tweeted, “North Korea disrespected the wishes of China & its highly respected President when it launched, though unsuccessfully, a missile today. Bad!” 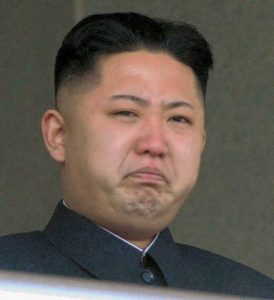 While North Korean madman Kim Jong-un also went ballistic in a tirade against the United States it appears the USA has his number concerning the threat of ballistic Missiles. This however still poses a grave threat for if there is ever a malfunction in the cyber-weapon technology the aftermath could be quite horrific.

While there is no source to confirm, I’d say Kim Jung-un and his military advisers are a prime candidate for a decapitation mission. He has amassed troops on the border and is banging his war drums loudly and consistently along with his Sabre rattling.

War can most certainly be averted with a decapitation strike but the question becomes whether the globalist cabal and those advising President Trump are seeking to avoid war. With China and Russia not being allies but desiring the same thing as the United States and their allies, it may mean this threat may be squashed expeditiously.

North Korea will most likely not be the catalyst to ignite World War III and that is what the globalist cabal is seeking. If it does not involve Russia all is naught.

Rest assured Iran is watching closely the events unfolding with the North Korean conflict. They may react sooner rather than later regarding their own missile capability. A launch into Israel may be a catalyst for WW3 and if they feel American technology is sufficient enough and the US is distracted with Jong-un, who knows what Iran may do?

If they believe their nuclear threat may be neutralized by cyber-weaponry they may become a bit more insane than what they already are and do the unthinkable without provocation or warning. On the other hand the NK missile defeat could also take the wind out of their sails and have them retreat and rethink their plans. But since when does rationality apply to Islam?

One thing is certain, we are living in perilous times and who knows when, where or how Armageddon gets unleashed? Alertness and watchfulness are the order of the day.

Article: BRING IT ON, KIM; US Threatens Decisive Response

Article: U.S. Gets Terse Response from UN on North Korea