Globalists Coopt Trump; Not What America Voted For

The recent attack on Syria and the threats for more by UN Ambassador, Nikki Haley is not what America voted for with Donald Trump. If globalism is what America wanted America would have voted for globalist criminal Hillary Clinton.

And no, Hillary did not win the popular vote in spite of the false claims by democrats and the fake news media. Clinton stole five states from Donald Trump and tried to recount herself over the top to steal yet another ill-gotten victory. But I digress. 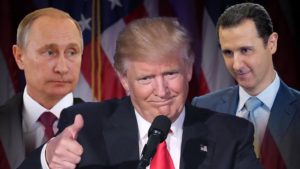 Russia is accusing the United States of a, “Flagrant violation of international law and an act of aggression” against Syria. As a result the UN Security Council has convened an emergency meeting to discuss the US actions against Syria.

There is ample evidence to prove that Bashar al-Assad did not orchestrate the chemical weapons attack in Syria last week or in 2013 for that matter. We witnessed during the Obama years a deliberate alliance with Islam terrorist and the deposing of all secular leaders. Unleashing the terrorists and terrorist groups is a lynch-pin to the globalism agenda. That was not going to happen under a secular government. Libyan President Muammar Gaddafi was a secular leader cooperating with America but still was assassinated by Hillary Clinton and Obama to advance their globalist agenda.

During the Obama lame-duck period we can add one more evil to the growing list of iniquities perpetrated by the globalist Obama regime. Susan Rice, Obama’s National Security Advisor and President Barack Hussein Obama ‘green lighted’ the scheme to have al-Qaeda terrorists in Syria receive financing by Qatar to detonate a chemical weapons attack and blame Assad.

The globalist plan is to have WW3 with Russia as a diversion for the central bankers plan to have an economic and currencies collapse in the developed nations so the globalism new world order could emerge from the ashes. The tactic is to eradicate nationalism by importing Islamic terror into western nations along with large numbers of legal immigrants to overwhelm the culture.

The reason for this is to overwhelm the culture and cause significant internal conflict, strife and perhaps civil wars. This lays the groundwork for the transition into globalism. Look how well it’s succeeding in the EU countries and Sweden! It’s Machiavellianism at it absolute worst.

If you are confused on what is the right and proper action to take, a simple test is to see who’s with you on any particular act. The Lamestream fake news media is overjoyed and gushing with praise; globalists like Chuck Schumer, Nancy Pelosi, Paul Ryan, Mitch McConnell, John McCain, Lindsey Graham and Angela Merkel of Germany are all overjoyed as are the Islamic terrorists and apologists.

When the enemy applauds your acts it’s time to seriously assess that act. Let’s now focus on the Trump Advisors so we can see just how coopted his international advisory team has become due to all the globalists advising him. Certainly the al-Qaeda scenario outlined above is known by all Trump advisors or at least should be. How can it not?

Let’s take a look one-by-one at the advisors on the Trump team that were in the Mar-a-Lago War Room photo edited by the White House. The photo itself was taken around 30 minutes after the attack. Those advising President Trump are predominantly globalists who seek war with Russia as this is a key element of the globalist agenda. Those who are Deep State antagonists to the President Trump agenda have the initials DS in their profile below. Let’s start with those not present in the photo that joined the meeting remotely according to White House Press Secretary Sean Spicer:

Mike Pence, Vice President: A long time establishment GOPe person and very much a globalist. He may have been the concession needed by Donald Trump much in the same manner that George Bush was VP to Ronald Reagan.

Marine General Joseph Dunford, Chairman of the Joint Chiefs of Staff: An Obama appointment to serve as Chairman of the Joint Chiefs is absolutely a globalist and military operative for the cabal. Trump needs to replace him with a non-globalist Chairman assuming any of his advisors would advise him properly. You’ve heard about the Deep State (DS) and here’s the kingpin, their queen bee.

James Mattis, Secretary of Defense: A long-time accomplished soldier and General and most certainly a globalist. James ‘Mad Dog’ Mattis still takes his marching orders from globalist General Joe Dunford rather than any civilian commander-in-chief. DS 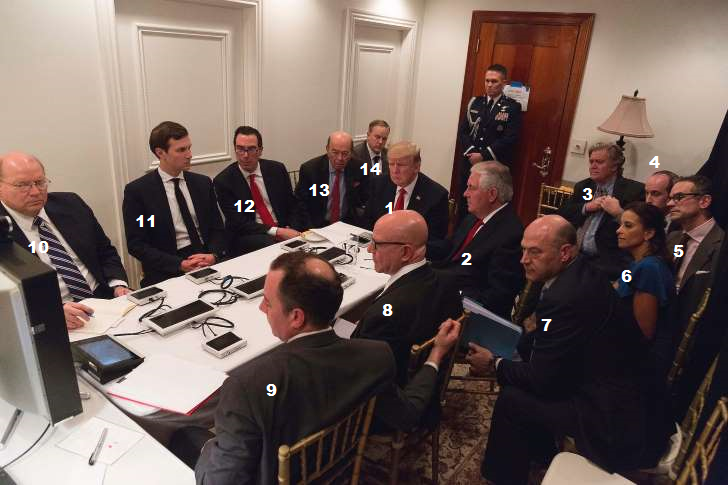 Ten to 12 of the 17 people (60-70%) at the Mar-a-Lago Syrian War Room meeting are globalists. That is consistent with the historical Donald Trump before he became a candidate for office when he was a New York establishment liberal democrat. Though he ran as a ‘conservative’ he is not now nor was he ever a conservative.

President Trump is a nationalist and a patriot for his love for America is genuine. Over half his policies lean liberal. His willingness to sign onto ‘Obamacare Light’ and blame the conservative ‘Freedom Caucus’ for it not passing is disconcerting. The Freedom Caucus may have very well saved his presidency by rejecting the obamacare light plan which would have given he and republicans ownership of the healthcare disaster. Too bad Trump could not see beyond ‘closing the deal’ though the critical thinkers who voted for him can and do..

There is simply no way any nationalist can feel good about capitulating to the globalist agenda when it comes to war. This Syrian missile strike is a huge step into globalism and WW3 with Russia. How can one feel good about walking into the trap set in motion by Obama and Rice in late December, 2016? It’s one thing for Obama to be pro-islamic terror because that’s who he really is … a Muslim.

However, for President Trump to step on the land mine put in place by Obama, have McMaster feeding him faulty intel making the move to be an ally to al-Qaeda terrorism is an entirely different and unacceptable story. Even if President Trump is able to walk back this blunder and avert war with Russia, the damage to a potential and powerful ally in combating radical Islamic terror is gone for the near and perhaps long term.

I think trade agreements will also suffer mightily as a result.  Yes, the carnage of the chemical attacks was gut wrenching and emotional, but did it ever occur to President to demand the proof to validate the source of those attacks? It took me less than an hour to do the research that proves Bashar al-Assad is not responsible for the chemical attacks in 2013 or in 2017. Such recklessness in foreign affairs is wholly unacceptable and inexcusable.

Common sense alone would give cause to examine motives. Rex Tillerson took Syria off the hook and yet weeks later we are to believe Assad engaged in a chemical attack that he knew would bring world condemnation and the ire of America? What sense does that make? Come on folks, this is not rocket science! Rarely with the Middle East are things not complex. President Trump screwed the pooch on this one and is a major foreign policy Faux Pas for sure.

C’mon Donald, keep your head in the game and stay focused. You are responsible for the people you choose and to load up with globalist generals advising you is a recipe for disaster. When the fake news media and your political enemies trip over themselves praising you does that not sound any alarms? Well it should. No more of this garbage please. Now that we know globalists cannot be trusted please say to them all … YOU’RE FIRED!

Article: Syrian Attack-Who was in the Room Advising Trump?