Dennis Montgomery, a former US Intelligence contractor is suing James Comey and other government figures for covering-up evidence he provided them proving widespread surveillance and unmasking on more than 20 Million American citizens.

Circa is reporting that Montgomery says the evidence he gave to the FBI chronicle the warrantless collection of phone conversations, bank records, financial data, credit reports, emails, Internet traffic, personal data and the unmasking of identities in spy data about millions of Americans.

This is consistent with public statements made by James Comey at the Boston Conference on Cyber Security at Boston College on March 8, 2017 that, “the 4th Amendment was a compromise for American sovereignty and that we the people have no right to privacy; and that even of thoughts belong to the government.” I can see why emperor Obama loved this guy and appointed him FBI Director.

James Comey is a ‘goose-stepping’ totalitarian and allowing him access to surveillance as the nation’s top law enforcement officer is akin to putting a drug addict in charge of pharmaceuticals. We have not yet begun to fathom the depth and breadth of damage caused by this utterly reckless Marxist dictator. Same goes for the entire Obama regime and his appointees to the IC and military.

This case is a stepping stone to the White House fraud perpetrated upon America. Dennis Montgomery states in an interview with Sara Carter, “Can you imagine what someone can do with the information they were collecting on Americans, can you imagine that kind of power?”

The other government figures named in the lawsuit include current NSA Director Mike Rogers; former CIA Director John Brennan; and former President Barack Hussein Obama. Based upon the lawlessness of the former regime Islamic Emperor rather than President appears more appropriate. The only question is whether justice shall prevail. 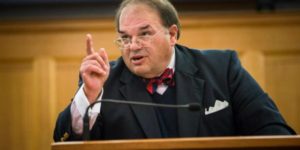 DC Judge Richard J Leon is assigned the case. This is the same justice who in 2015 issued an historic ruling that the NSA’s past ‘bulk collection’ of Americans’ phone records most likely violated the Constitution. Though that practice is alleged to have ceased who really knows?

Before we get too excited that Judge Richard Leon is the right justice to handle the case, this is the same judge who struck down the DC concealed carry gun law; and released an ISIS terrorist from ‘Gitmo’ the Guantanamo Bay Detention Center in Cuba housing enemy combatants captured in the war on terror.

Like most of the corrupt federal judicial system operating today we ‘roll the dice’ and pray justice shall prevail knowing full well true justice has become a crap shoot. Nonetheless, in a corrupt system Judge Richard Leon has for the most part respect for constitutional law and generally does not legislate from the bench as is the practice of a majority of his fellow justices.

This is a case we must watch carefully especially considering the lamestream fake news propaganda media will at best ‘whisper’ about it for it seeks to expose those they propaganda for. Sean Hannity of Fox news is tracking this and the Seth Rich murder case, two taboo topics of DC corruption.

Do not be surprised to see attacks mounting against Sean Hannity to remove him from his global platform. We at NHN are the targets of attack and suppression by the Google search engine algorithm in that we get buried and our reports do not surface on key word searches.

We are asking you our readers to help keep free speech alive by posting this on social media even though Facebook and Twitter have become the enemies of free speech. We must fight for our rights and freedoms every day.

Articles: Did The FBI Have Evidence Of A Breach Larger Than Snowden? A Lawsuit Says Yes.

NHN Article: Get a Good Whiff of FBI Director Comey

Tags:
AmericanscomeyFBIICmuellerNSAobamaspyunmask 20M
« President Trump to Nominate Christopher A. Wray as Next FBI Director
The Comey Hearing: Stop Draining The Swamp or Be Impeached »
Share