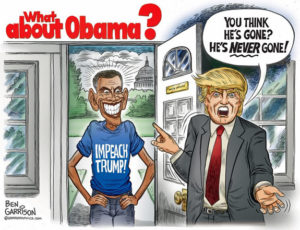 In an earlier article we showed how the Rex Tillerson State Department under the extremist Never Trump tutelage of Brian Hook is defying President Trump and the Supreme Court. Breitbart reports that the Trump Administration has a proposal to transfer the bureau of Consular Affairs and its bureau of Population, Refugees, and Migration (PRM) from the State Department to the Department of Homeland Security.

Moving these two bureaus from State to DHS is an absolutely brilliant move. It hits the deep state subversives where it hurts the most … in their precious bureaucracy. The deep state created a labyrinth of convoluted and complex administrative hurdles and zig-zags that insulate their power making it difficult or impossible to replace those embedded there.

Extracting that decayed tooth and telling DHS to start afresh is one way to knock the deep state subversives on their keister. The Obama bureaucrats are sabotaging the President Trump administration and this move neutralizes the sabotage and perhaps justifies Department of State lay-offs? One can only pray yes for its beyond time the Obama subversives get their pink slip.

The move requires an act of Congress and perhaps the Republicans have finally realized that victory is supporting President Trump. Breitbart reports that Representative Raul Labrador (R-ID) and Rep. Bob Goodlatte (R-VA) have introduced the Refugee Program Integrity Restoration Act (H.R. 2826), whose provisions are consistent with the proposed White House memo advocating the move of PRM from State to DHS.

A pink-slip for the Obama deep state operatives and not a transfer from State to DHS please! That’s a quick and efficient method for the wholesale draining of the swamp creatures! Fake News CNN reports the swamp creatures in charge of these bureaus object to the proposed change saying it is not a good idea. Well, because these are all Obama subversives that makes this a great idea!

What is troublesome are the leaks coming from the White House on the proposal to transfer operations to DHS. I am convinced that as long as Reince Priebus remains as White House Chief of Staff, so do the leaks. Priebus is a long time GOP establishment (GOPe) and not a friend to President Trump. The purging of the Never Trump personnel needs to begin three months ago.

The current structure is the State Department has their ‘pipeline’ to bring in unvetted refugees and DHS settles them in their respective states. Consolidating the process makes it much more efficient while simultaneously displacing the Obama deep state holdovers who oppose President Trump’s every move. Vetting is fiercely resisted.

A joint statement by Labrador & Goodlatte say, “The Refugee Program Integrity Restoration Act makes a number of reforms to the refugee program to curb fraud, strengthen national security and public safety, and restore integrity to the program. Notably, it enhances screening and establishes thorough vetting procedures to identify fraud and potential security risks. Administration officials have stated that roughly 300 people who came to the U.S. as refugees are under active investigation by the FBI for potential terrorism-related offenses. We have an obligation to the American people to beef up vetting procedures for those seeking to come here.”

Moves like this have the democrats, media and deep state screaming bloody murder with baseless accusations of insanity on the part of President Trump. Their premise is if you’re not on board with their far-left globalist agenda to destroy the mainstream American culture you must be crazy. Well democrats, good luck with that. 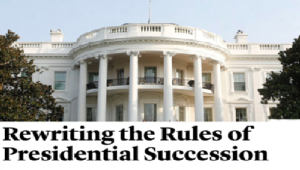 The calls for impeachment are a false flag designed to obscure the real threat looming … the rewriting of the Continuity of Government (COG) rules the deep state wants to implement to invalidate the entire 2016 election and everything President Trump has accomplished while in office.

The scheme is to pretend the 2016 election never happened and to roll back the clock to Monday, November7, 2016. While I’d like to readily dismiss this as folly, the COG rules are a threat and public disclosure of the scheme is sure to bring about a backlash from America to derail the effort before it gains steam and momentum.

In that spirit please make this article go viral, post in all your social media groups and engage in a discussion to expose this plot to forcibly remove this duly elected President and all other Congressional elections as well. The deep state and the globalists want to invalidate every election nationwide that occurred on November 8, 2016.

Let your voice be heard and repel this scheme just as we have defeated every other scheme to date. Liberty and truth needs to hear your voice of reason loud and clear!

Article: Two Dozen Democrats Get Behind Bill To Lay Foundation For Removing Trump For Being Mentally ‘Incapacitated’

Article: Threats Against Lawmakers Already Higher Than All Of 2016