I’m not sure which is more disgusting; the international pedophilia child-sex trafficking ring or the lamestream fake news media blackout that refuses to report it. What is clear is the lamestream is an active participant and the blackout is not just a cover-up but self-preservation.

Former Navy SEAL Craig Sawyer was interviewed by Mike Zimmerman of InfoWars at the NRA Annual Convention in Atlanta, GA April 27-30, 2017. Sawyer reveals that over 3,000 pedophiles belonging to an elite pedophile/sex-trafficking ring have been arrested since Trump took office, amid a total blackout by the mainstream media. Here’s the interview:

About one week after this interview US and European police arrested nearly 900 people thought to be connected to an underground child pornography network in a case that has drawn criticism from some civil libertarians. These so-called civil liberty groups not unlike the ACLU have dedicated themselves to opposing, undermining and covering-up pedophilia and sex-trafficking rings.

These international pedophile and human sex-trafficking rings are often managed by satanic blood ritual cults entangled in grotesquely abusive practices of pedophilia, ritualistic torture and murder of children and young adults. These bizarre rituals involve those at the highest levels of government and industry.

Their power is used to invoke the protective umbrella of law enforcement, NGOs and publicly funded groups to provide cover for their despicable satanic practices as well as participation in such. These groups have been operating with impunity since the elites have been running government.

Arrests are now starting to occur at the elite echelons of power and why the deep state and government are frantic to depose President Trump who is orchestrating the arrests of international pedophile and sex-trafficking rings. The powers are out to get President Trump and are pushing back real hard. Most of the insanity you see in government and the media aligned against Trump is due to the assault on pedophilia and the take-down of human sex and slave trafficking.

For example, the attempted assassination of Congressman Steve Scalese is due to his legislative effort to go after the pedophiles and sex traffickers. Just last week in late June, 238 Hollywood pedophiles were arrested that included some household names, community leaders, white-collar professionals and clergy as reported by the LA Times.

John Reynolds, acting special agent in charge of DHS Investigations said in his press conference, “The incidence of child sexual exploitation has reached staggering proportions. Parents and kids need to have frank conversations about how to stay safe in cyberspace.” The internet rather than playgrounds remains the #1 hunting ground to lure in children who go online.

Rather than eliminate children from going online it may be better for parents to emphasize the importance of having an open dialogue about internet safety. I shake my head knowing we may be robbing children of their innocence with such dialog but when contrasted to robbing them of their safety, well-being and often their lives; it’s a no-brainer.

It will have to be this way for a while until we bring the satanic ring leaders to justice and lock-up the majority of pedophiles and satanic blood cults. According to Liz Crokin, award winning author, journalist and advocate for victims of sexual crimes, the pedophile and sex-trafficking round-up in DC may take out from ⅓ to ½ of the deep state, government officials, lobbyists and power brokers nested in the swamp.

One such example is the April, 2017 arrest of former Vice President of DynCorp, Major General James Grazioplene who was charged for his part in an elite pedophile ring with multiple counts of child rape occurring between 1983 and 1989. According to the Washington Standard, “Grazioplene’s connections with DynCorp immediately raise a red flag, as the company has been embroiled in numerous high-level scandals involving the exploitation and trafficking of children for sex — dating as far back as the Bosnia conflict during Bill Clinton’s tenure as US President.

In May, 2017 Florida man Steven W Chase, 58, was sentenced to 30 years in prison for creating what is believed to be ‘the world’s largest child pornography website’ with more than 150,000 users. This led to 870 arrests and the rescue of 259 sexually abused children in a joint FBI-Europol operation. 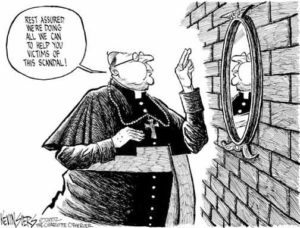 Vatican Absolves Itself of Pedophilia

But here is the grand-daddy of pedophilia charges to date … Cardinal George Pell, Australia’s Senior Roman Catholic Prelate; communist Pope Francis’ top adviser and de facto Chief of Finance and the 3rd ranking highest official in the Vatican. Pell is the highest ranking Vatican official to be charged with pedophilia and other child sex abuse charges. His is summoned to appear in Melbourne, Australia Magistrates’ Court on July 18 for arraignment.

It has long been known by Vatican insiders and those close to the Vatican of their Global Pedophile Network. Leo Zagami, author and former high ranking member of some powerful Illuminati networks decided to speak out by exposing the spiritual corruption from the inside.

Without going in-depth at this time about the Vatican’s Global Pedophile Network, President Donald Trump knew of this network and is instrumental in unraveling it along with the Liberty Movement. With the Vatican pedophile network imploding, this tightens the noose for the London and DC take-down as well. President Donald Trump’s CNN take-down tweet is a prelude of what will soon be coming to DC.

Still the fake news media still refuses to report on the global pedophilia implosion but rather insists on still calling it a conspiracy theory. My guess is they will continue to do this all through the indictment phase of the DC network. CNN and other lamestream media outlets are bad actors along with a score of other political, legislative, judicial and ancillary perverts. It appears there may be scores of Congressional seats and 1-2 unanticipated Supreme Court seats opening as a result.

The Vatican is a world power and has been since the days of the Roman Empire when it, during the reign of Charlemagne became the Holy Roman Empire. The Vatican is now infested with pedophiles, globalists and luciferians who brought in others like them faster than oxygen gets sucked into an empty void. Roman Catholicism is teetering on the precipice of annihilation of its power.

The Catholic Church may continue to exist after the Pope gets indicted or resigns and flees to Argentina. The church’s place of prominence as a world religion will most certainly go into a tailspin when that happens. When the courts begin forcing restitution for all the abused children still alive and should they decide to do a full investigation going as far back as they can, who knows what will happen when all gets revealed?

Then comes London, DC and the US federal, state and city governments to ante up. The Vatican and the international central banking system along with the Fed is the cabal that heads-up the deep state. Pedophilia reaches up to the highest pinnacles of world power and yanks them all down and crushes them into ash. Now we know why the democrat left is so unhinged with President Trump. Yes folks, its happening … the swamp is being drained!