Since the release of the FISA Abuse Memo on Friday the coup d’état is collapsing and the desperate democrats and republican RINO traitors like John McCain are imploding. DAG Rod Rosenstein threatens Nunez and HPSCI for doing their constitutionally mandated job on oversight of the Department of Justice (DOJ) and the Federal Bureau of Investigation (FBI).

This threat by Rosenstein is yet another criminal offense in a long line of criminal offenses.  Fox News Legal Analyst Gregg Jarrett tweets that a second eye witness validates the threat. He is calling for the immediate resignation or firing of Rod Rosenstein. You can read the series of tweets at the link below in References. 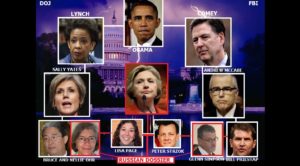 It seems the long list of conspirators have become unglued and behaving in such a reckless manner that the immediate arrests and round-up of the coup conspirators must happen immediately. All represent a clear and present danger to the Republic now being restored by President Donald J Trump.

The arrogance of the DOJ and FBI in obstructing the ability of Congress to implement appropriate oversight is creating a Constitutional crisis. The US Constitution clearly delineates the role of Congress to exercise accountability by the Executive Branch agencies and departments.

Their refusal to cede to Congressional oversight is obstruction. Even the judiciary has joined in the fray with Federal Judge James Boasberg who also serves on the FISA Court (FISC) has blocked attempts to have Special Counsel Robert Mueller release James Comey memos as part of the ongoing investigation into FISA abuse.

The era of lawlessness and the weaponization of most of the alphabet agencies, departments and renegade judiciary all contribute to federal government chaos and the constitutional crisis being created by such anarchy. President Trump must seek the help of Federal Marshalls to restore order, seize control of the FBI and DOJ servers to prevent attempts to destroy evidence.

It is very clear that hostile actors in our own government established a conspiracy to overthrow the Constitutional Republic by defying the rule of law regarding the right of the people to have open and honest elections. The time has come to issue warrants for the arrest of all these conspirators in all three branches of government and yes, the propaganda media who is desperate to protect and advance the conspirators in this coup d’état scheme.

The federal bureaucracy now represents a clear and present danger to the safety and well-being of the American people. May God save the republic!