Did Congress Just Punch a Hole in Trump’s Wall? 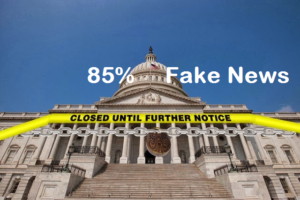 It seems the fake news on the government shutdown will punch a hole in Trump’s wall. Because republicans refuse to govern as republicans we are still being run by the far-left Schumer and senile Pelosi democrats. It seems President Trump is willing to renege on yet another campaign promise that is the centerpiece of his presidency.

Thanks to globalist RINO democrat Paul Ryan, err I mean republican who refuses to provide funding  for the wall proves yet again republicans are incapable of leading Congress and they are equally inept as the opposition party, except when a nationalist republican is at the helm. Democrats are evil totalitarians while republicans are inept at everything, not a good recipe to restore American values.

Congress refuses to govern this nation in accordance to the will of the American electorate and the campaign promises of the victorious winner President Donald Trump. How long will far-left Paul Ryan to sabotage President Trump and continue to ignore the economic facts of the border wall?

Will this be yet another retreat from nationalism and another victory for globalism? President Trump is unwilling to fight for nationalism and the centerpiece of his America First and Make America Great Again campaign promises. Should our elected leaders continue to deny America their voice in government then to peril one and all!

The facts are many why the wall is good for America and why it is failing. First is that the President Trump advisory team is heavily loaded with globalists who are in absolute defiance to most everything President Trump campaigned on. President Trump is labeled a nationalist and America First President but honestly I do not see why? He picked these folks and can replace them at any time.

Close to ⅔ of the President’s National Security Council is loaded with globalists and RINO establishment personnel.  The link is a valuable one page pdf file you can print. That same ⅔ ratio applies to his other close advisors as well.

Second, if Trump had advisors willing to speak the truth about the fake news media and the far-left democrats and RINO GOPe he would know that a ‘government’ shutdown is a myth. The ‘shutdown’ is simply a tool of the globalist, big government media and deep state establishment to implement their new world order scheme. The supposed shutdown is fake news because 85% of government services remain unaffected.

Third, a wall saves us $100 Billion the year it is completed. Illegal aliens cost us close to $150 Billion annually versus a one-time capital expenditure of $22 Billion. This is the no-brainer of all no-brainers. Once the wall is built subtract wall maintenance costs of an extremely generous amount of $1 Billion.

When we compare wall maintenance to the current $150 Billion annual cost associated with illegal aliens the discussion should end right there. The wall and law enforcement will in time remove the cost of illegal aliens to near zero. I guess it’s too late to allow common sense to prevail in federal government economic decision-making. Corruption is way too deep to allow that and there appears little to no effort in draining the swamp.

Fourth, President Trump has told ‘dreamers’ the name allotted to the children of illegal alien parents that he will not deport them. Never have I witness such a dramatic and sudden turnaround from nationalist campaign promises to globalist policy making. None are as dramatic as the next point. 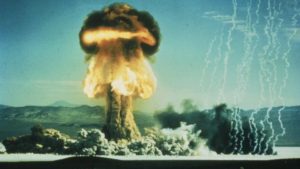 Fifth, his is embracing the military leadership from the globalist Military Industrial Complex to make the majority of decisions. The result of such foolishness is we may be looking at World War III in the very near future. Trump specifically ran contrary to this world war scenario and globalist world view for America. This is the platform of far-left globalist Hillary Clinton.

Trump was able to garner many of the ex-democrat votes who left their party in droves during the Obama regime. The exodus continued during the campaign for Clinton. Most of those who departed have gone independent or to the left leaning parties but still voted Trump. The common sense policies and initiatives were the foundation of his campaign and anti-globalism.

So what happened? The turnaround came immediately after his huge and embarrassing defeat at the hands of republicans who failed to pass the Obamacare repeal and replace promise. Are we witnessing a colossal hissy-fit from our sitting president? Or could it be something more sinister?

Time will tell but one thing is clear. The Donald Trump who ran for president is not the same Donald Trump who is sitting in the Oval Office. It’s flip a coin as to which Donald Trump shows up on any given day. At least he remained true or at least we hope he has with the Neil Gorsuch and other selections to the Supreme Court. 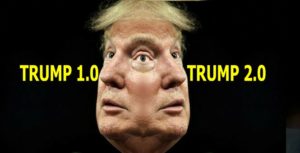 We were all betrayed by the rhetoric of globalist RINO George Bush’s selection of John Roberts as Chief Justice. I heard much of the same ‘conservative’ and ‘constitutional’ nonsense applied to him but his decisions have been anything but. Gorsuch is solid for religious liberties but we’ll have to see how he rules on the other cases that come before him.

Disappointment and skepticism are the flavors of the day for most who voted Donald Trump. A new poll reveals that ⅔ of all Americans believe the democrats are out of touch with the American people, so why are we capitulating to them? It’s time we hold Donald Trump’s feet to the fire and start demanding some answers.

Article: Globalists Coopt Trump; Not What America Voted For

Article: Shock Poll: 67% of Americans Believe Dems Are Out of Touch

Tags:
betraybudgetcongressgovernmentryanshutdown
« Government Shut Down is 85% Fake News
Time to Put Down ANTIFA and The Lawless Left »
Share