The Denial of Islam is Our Titanic

Why did only a few survive? It has to do with human nature. The greater the enormities of a disaster, the less likely people are to consider the propensity and reality of doom.  This applies to the case of the Titanic’s maiden voyage with all its pomp, circumstance and hype of being the first unsinkable ship.

Nobody and I mean nobody believed the peril or reality that the Titanic would or even could sink. The Titanic was touted as the largest and the safest ship ever built (true at that time) … and unsinkable (never true at any time).  That mantra was believed by all, the builders … the designers who did not provide adequate life boats … the passengers and crew whose minds denied acceptance of the reality of sinking as incomprehensible.

This denial continued even while the disaster was unfolding. The peril of death even after the Titanic struck the iceberg and began to flounder in the icy waters of the North Atlantic could not alter the staunch belief of its impossibility … until it was too late. The peril was defied until it could no longer be denied.

I simply refer to this as the Titanic Affect: A strong belief that deeply permeates the person in such a way that not even the reality of an event contrary to that belief can alter the persons affect. Wow! Think for a moment and ponder how pathetic is that? 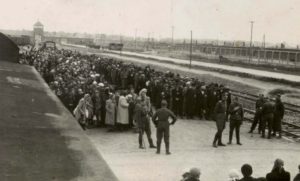 The Titanic Affect struck again with the Jews in World War II with their systematic destruction by the fascist NAZI regime. Many in the NAZI military including most German citizens were quite complicit with the NAZI intent on achieving their goals … the eradication of Jews who were blamed for every economic woe and to a lesser extent Christians because they aided the Jews. Millions of Jews were slaughtered because the Titanic Affect would not allow them to believe they were not going to work camps. Eventually the reality sank in they were being transported for extermination, and still most complied. The magnitude of the horrors of the NAZIs remain incomprehensible and why many believe it never happened.

The Titanic Affect strikes yet again, but this time the peril is not a natural disaster like the Titanic; or the brutality of the NAZI final solution under Hitler. No, this time it is the nature and true purpose of ISLAM and its invasion of western culture orchestrated by globalists powers.

Very few people know and understand the true nature of ISLAM. Since the days of George Bush after the 911 Islam Terrorist attacks the steady and loud drumbeat of “Islam is a religion of peace” was pounded into the minds of Americans by government, Lame Stream Media’s fake news, TV and radio including many conservative talk show hosts, politicians and yes, even Christian churches and organizations. 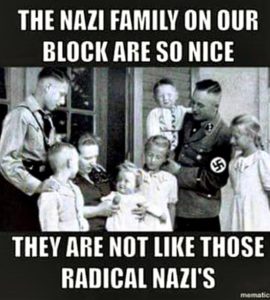 Eventually the constant and incessant mantra entered the hearts and minds of Americans reared on the tenets of Judeo-Christian love. Our faith-based culture is predisposed to embrace the false message of peace by Islam. Christian Americans cannot comprehend the Islam Idiocrasy of global conquest based on forced submission or death. The Marxist strategy of “if you keep telling the same lie over and over and over again people will eventually come to believe it” rings true.

Islam … not just ISIS, ISIL, Muslim Brotherhood or other terror groups or predominately Muslim nations may rightly govern but only ISLAM. Islam will oppose non-Islamic Muslim nations from governing and seek to overwhelm them as well.

All infidels must also be brought into full submission to Islam regardless of which nation they reside, regardless of where the nation is located and whether they are a host nation or not. The Islam Idiocrasy mandates that ALL HUMANITY become subject to their god Allah and his prophet Mohammed by any and all means to achieve its stated goal … worldwide submission to Allah.

Jihadi is the means by which the Islam Idiocrasy converts all infidels into total submission. The direct translation of Islam is Submission and any refusal to fully submit to Allah results in death. Any “non-secular” Muslim nation not in full submission to Islam will by the laws and teachings of Islam suffer a fate worse than that of the infidels. For any Muslim that rejects Islam will be treated worse than an infidel. Very few Muslims dare to speak truthfully about Islam for fear of painful, torturous death.

Islam Idiocrasy is based upon three primary sources for their rule of law: Quran, Hadith and Sharia. Jihadi is the means by which all not in submission to Islam are to be brought into submission. Allah rules mainly through the teaching of Quran; and Mohammed as taught by Hadith. Jihadi is understood by many to mean “holy war” and it is but … true Jihadi holy war is not limited to armed conflict but Jihadi is “holy struggle” as defined under Islam. Jihadi is the struggle to bring all nations and peoples to Islam submission by whatever means necessary.

True Jihadi is to be engaged by every Islamic man, woman and child. Because this is terrifying, frightening and contrary to the lies and misinformation being systematically fed through the media, government and Islam itself and yes, even some Christian and Jewish groups, churches and synagogues for most do not fathom the dire and dangerous peril Islam represents. The Titanic Affect is a natural tool to bring about submission for who wants to believe Islam is evil and worse than NAZI?

The Islam Idiocrasy has progressive and globalist elements to achieve its end. The doctrine of “Taqiyya” which is Deception feigns cooperation, peaceful motives and friendship for a time until it can gain a foothold upon its host or host nation. It then systematically expands until full domination is achieved. The process generally fits the following pattern to establish ISLAM IDIOCRASY:

Islam Idiocrasy is never subject to any laws of man, government or religion and will eventually demand absolute adherence to the tenets of Quran, Hadith, and Sharia law. All men, women and children under ISLAM are to engage in their own form of Jihadi: holy “struggle” and “war” to expand and implement ISLAM.

Jihadi is not the exclusive providence of militarily attacks with bombs and bullets but is a multi-faceted and integrated in its approach as the checklist above summarizes. When are we going to learn that CAIR, Muslim Brotherhood and every other ISLAM group is engaged in their own Jihidi mission? Don’t let the different “missions” fool you for ISLAM exists to take-down their enemies and is not done entirely with bombs and bullets.

We had an Islamic President in Barack Hussein Obama. Evidence has emerged that he was born in Kenya; his posted Hawaiian birth certificate is fraudulent in 9 specific points and exists only in cyberspace. If you simply allow his non-birth name to sink in he is clearly Muslim. Barack Hussein Obama has pushed for Islam expansion globally and domestically.

Currently in the United States of America, there are more than 1.5 Million ISLAM immigrants and illegal aliens that have come to America since 2009 with another million more slated within the next 5 years. Our federal government has betrayed the American people by having open borders, shabby vetting and is financing this invasion by illegally settling ISLAM over 180 cities across America. We now have about 40 enclaves with many of them as no-go zones.

The American Titanic has hit the illegal alien and immigration iceberg and we’re taking in water and about to flounder. Did you know that Islam immigration to the United States is illegal under immigration law? Public Law 414, Title 2, Chapter 2, Section 212 prohibits Islam immigration. This Immigration Tsunami will now require brute force to STOP THE ISLAM INVASION. 100% of Islam coming to America are to engage in their individual jihadi mission when called upon. Around 20-25% is violent and terror based.

The deep state and shadow government are globalists and the Islam invasion is but one of their plans to overwhelm the culture with foreign elements that will not assimilate into the culture. Abortion is also a strategy to limit the number of American births and replace the population growth with legal immigration and illegal aliens.

It’s time to PATRIOT-UP to defend your families, your home and your property. We see the hostile nature and war being waged against America through Barack Hussein Obama; the incessant leaking of classified and top secret information by the deep state and shadow government; the congressional globalists in congress opposing the dismantling of the globalist infrastructure and the re-tooling and building of the American manufacturing base; the judicial globalist judges blocking all attempts to limit hostile actors from entering our nation and many, many other vile offenses.

The time for half-measures and legislative solution has vanished because the political establishments of democrats and republicans have made it succinctly clear our own government under Obama is still orchestrating this invasion and coup d’état of America. WAKE UP AMERICA and defend Liberty. If we do not make our stand now we lose liberty forever!  We must rally our support for President Donald Trump’s immigration and security policies if we are to survive as a free nation.

Far Left Islamophilia is Treacherous Mass Psychosis
The War for Our Survival is On!
WTC 911: What Do You See?