Veracity Media (20 March 2017) Another day, another controversy being stirred up by the media, with President Donald Trump in the spotlight yet again, this time for his statements regarding the USA’s disproportionate contributions towards NATO military expenditure.

Whilst ‘Fake News’ pointlessly debates the semantics of a tweet, NATO continues to unapologetically riffle through America’s coin purse, effectively co-opt the United States Military and weaken other Member States in the process.

It took no time for ‘fake news’ to set about ridiculing President Trump and his apparent lack of knowledge regarding how NATO operates, in particular the manner in which Member States contribute to military expenditure.

Journalists began reiterating that no country ‘owes’ NATO any funding, and that if a Member State were to begin to allocate the desired 2% GDP towards military spending, per NATO requests, they would not owe the USA anything in reparations.Whilst President Trump is not known for the eloquent manner in which he speaks, one thing appears to be certain, the man knows a raw deal when he sees one.

“Despite what you have heard from the FAKE NEWS, I had a GREAT meeting with German Chancellor Angela Merkel. Nevertheless, Germany owes… vast sums of money to NATO & the United States must be paid more for the powerful, and very expensive, defense it provides to Germany!” President Trump on Twitter 3/18/2017

President Trump’s critics continue to seek out their elusive ‘gotcha’ moment by debating the semantics of a tweet and needlessly bawking at the particulars of the President’s statements to stir a contrived controversy. Despite the fake news media’s attempts, the very NATO report on military expenditure in question does nothing but reaffirm President Trump’s statements.

President Trump’s seemingly masterful use of twitter as a means to place issues in the public eye further demonstrates the fake news media’s failure to treat news based on merit. The media is the only fool here, for is it reasonable to expect Pulitzer Prize winning tweets in 150 characters or less? The only fool is the biased fake news media.

According to NATO defense expenditure statistics for 2016 the Member States of NATO paid a total of $918.3 million dollars toward military expenditures. The USA contributed an astounding $664.1 million towards that total figure, which amounts to over 72% of total NATO military contributions.

Therefore when Trump remarks about the “…very expensive, defense it provides to Germany” he is most certainly correct in his assertion. For sake of comparison, Germany’s contributions amount to around 4.4% of total NATO military contributions.

Now granted, the USA is not obliged to spend the amount they do on their military, as each Member State is only asked to commit 2% of their nations total GDP on military spending. Despite this rather modest request, the Wall Street Journal states only five NATO countries actually met this in 2015, the USA being one of them.

The USA however, spent around double this figure at roughly 3.6% of GDP going towards military expenditure. This additional payment amounts to roughly another $300 billion towards NATO defense. The USA has no obligation to contribute this additional “gift” and retains the right to decline further “gifts” to NATO in the future. Furthermore, should the other NATO Member States work to contribute their fair share, the United States would not be placed under such a heavy financial burden.

The question then becomes, why does the USA allocate such a disproportionate amount of money towards defense spending?

Some would argue the over-spending on behalf of the USA is due to the fact that unlike many of the other Member States of NATO, the USA is a ‘superpower’ with far-reaching interests and international military commitments, such as the Middle East, which would necessitate seemingly greater military spending. This argument does have some legitimacy, as the USA has, for quite some time, employed a very interventionist foreign policy.

However, the issue that President Trump appears to be raising is more moral in nature. If the United States is pouring such a disproportionate amount of money, into military spending, comparative to other NATO members, shouldn’t it be thanked for the financial burden it takes on, or at least be recognized more by NATO and given greater influence?

NATO is a military alliance, and one of the core agreements held between NATO members’ is that ‘an attack on one shall be considered an attack on all.’ This commitment is found in article 5 of NATO’s founding charter.

Article 5 has only been activated once in NATO’s history, after the 9/11 terrorist attacks on the United States. The guiding principle behind article 5 would mean that should a Member State be attacked, the other nations would be expected to rally to the Member State in peril.

Therefore, it is foreseeable that it could quite easily be US troops that would be deployed to defend a fellow NATO Member State should it be attacked, even if that country was, for example Luxembourg which does not even spend half a percent of their nations GDP on their own military.

It is no secret that the United States military is the best-equipped and most well-funded military in the world, and not by a small margin either. According to Business Insider, the military spending by the US in 2015 was greater than that of China, the United Kingdom, Russia, France, India, Japan, Saudi Arabia and Germany combined. 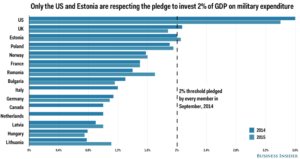 However, despite footing the lion’s share of the bill as ‘vanguard’ of NATO, the USA has the same say as any other Member State. Because under NATO’s guiding principles, each member state has one vote regardless of contributions or financial investment, this is further complicated, as decisions are made by consensus.

This dichotomy between equal say in how to deploy NATO forces and the inequality of contributions towards what constitutes NATO forces is the real issue at hand regarding the United States’ current role in NATO.

President Donald Trump has quite rightly touched on the issue of disproportionate financial contributions to NATO. However perhaps the greater issue at hand, is what current benefit does the United States truly gain from membership in NATO?

Other than the other NATO Member States granting the US the pleasure to fight foreign battles on their behalf so they can opt for liberal spending on social welfare programs. How nice!

Furthermore, agreements such as those found in NATO’s article 5 are inherently flawed for several reasons.

Firstly, the ‘powder keg’ mentality of article 5 and agreements like it greatly contributed to the beginning of WWI, with many nations convinced that their alliances would act to deter attacks, ultimately it drew more nations into the conflict. This same philosophy is being employed again by NATO’s article 5 agreement, we have seen, after the events of 9/11 many nations rallying to the United States side in the Middle East, and what a success that has been.

Secondly, and most importantly it’s a disincentive for the independent development of military capabilities across sovereign nations. Why devote your nation’s own money to developing an independent military when you can defer to the military might of the United States?

The solution is far from simple, but this is a potential option to remedy the imbalance; the USA needs to gradually reduce their financial presence in NATO, forcing the other Member States to take their own defense seriously. By reducing the USA’s military influence in NATO this would essentially force the other Member States to gradually develop independent militaries. This would also lessen the perception that the United States is ‘policing the globe.’

This arrangement would enable the other Member States to be more self-sufficient with respect to defense, make them less beholden to other nations as well as allowing them to genuinely contribute to NATO in a substantive manner, as opposed to perpetually riding on the coattails of the United States. Furthermore, if the US were to take a more backseat approach, they can reduce their military spending and work to tackle the overzealous spending and gradually pay off the national debt, which is far more dangerous than any single terrorist could ever be.

The process of reducing American presence in NATO could not occur overnight, however it is crucial that international organizations, like NATO, operate in the manner they were intended and do not attempt to recruit nations to act as ‘arms’ of an international government. Because currently, it could be argued that NATO is co-opting the US military to act on their behalf, whilst the other Member States contribute comparatively little.

Article: NATO Calls for an Increase in Contributions

NOTE: The views of this author do not necessarily reflect the views of NewsHawk Network