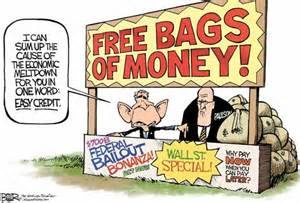 How did we get to the incredible election of President Donald J Trump? It all started back in mid-2008 when the conservatives and traditional value Americans began to whisper about the fundamental transformation of the United States of America by Barack Hussein Obama. Our national nightmare began with the $Trillion TARP bailouts, based upon the alleged catastrophic meltdown of the financial system that began during the lame-duck session of George Bush.

The globalist left wing extremist democrats and establishment republicans (GOPe and RINO) had America embark on a globalist course when most people still believed the New World Order (NWO) was the stuff of conspiracy theory. The globalist framework began being erected on the foundation formed by every President since Ronald Reagan but in reality the machination of this scheme was hatched back in the 1860s through the likes of Baron de Rothschild and the Vatican central bankers.

The globalist infrastructure was incrementally being laid out through legislative actions and war beginning with the Civil War. The massive debts from Revolutionary and Civil wars needed to be remediated due to default. This led to the formation of a new government called the UNITED STATES, Inc. which was illegal for the 1871 Organic Act for the District of Columbia had no Constitutional authority to do so. There were many other unconstitutional laws enacted since then, but I digress.

The post reconstruction era that began in the late 1870s entered a period of political corruption, scandals and the growth of large cities and big business. The formation of the titans of industry was well underway with legislation being passed that served platform using labor and big business in creating the infrastructure the central bankers wanted for subsequent financial control. In 1895 JP Morgan lends the US Government gold to stave off federal bankruptcy and by 1913 the trifecta for full control is enacted.

In 1913, the passage of 17th Amendment in effect abolished state’s control of the Senate, thus neutering their influence over federal government affairs. This was an essential and vital step to disenfranchise state government control of the Senate. The powers that be knew having ordinary individuals responsible for voting members into the Senate and the House of Representatives could be manipulated and fooled most the time into doing their bidding. This eliminated strong collective opposition by state governments from interfering with the world order being established.

The tactics used by the new world order central bankers have not changed nor have the tactics of the globalist politicians. Using the middle name of Barack Hussein Obama was sufficient to be labeled a racist as was any attempts at vetting Obama during his candidacy or anytime thereafter. Barack Obama is the greatest fraud perpetrated upon America. The so-called birthers are correct for his birth certificate exists only in cyberspace for it is absolute fact it was created using layers and that 9 counts of fraud are evident.

Both he and his wife Michael are fraudulently using social security numbers not issued to them. If we add the more than 50 counts of treason and sedition the only reason this man is not in prison is the protection of the cabal. Let’s take a look at this video which summarizes the people’s opening salvo at restoring our government being destroyed so a globalist society may emerge in its place.

Americans would be shocked to learn a significant portion of $2.5 Trillion authorized $700 Billion for TARP, $787 Billion for Stimulus and $1 Trillion for Bailout went to foreign banks and distressed foreign companies and not to US banks and companies as promised. From 2008-2012 $4.8 Trillion in outlays were made with $1.3 Trillion returned with a mind boggling $16.9 Trillion in US Government guarantees issued.

More globalist infrastructure was created with the nightmare we call Obamacare which in essence was designed to fail by bankrupting insurers so that after the 2016 election of Hillary Clinton there would be substantial opportunity to justify the federal government to “rescue” the healthcare system from the evil insurance companies to create a federal single payer system which was their plan all along. Obamacare and entitlements would represent around 55-65% of total federal spending because CBO estimates are historically underestimated and under reported.

The emergence of the Tea Party and the subsequent elections of 2010, 2012, 2014 and 2016 will be articulated in part two of this article. Suffice it to say republicans were sent to Congress to stop the insanity but we didn’t realize that the RINO GOPe were just as insane as the democrats for they all buy into the globalist agenda.

YT Video: America Rising (embedded above). If you are a YT member please ask the creator of this video to contact us at our website

Article: History of US Gov Bailouts