Whenever a conversation on Islamic terrorism is initiated it will invariably be immediately shut down with the cries of racism and that not all Islam is radical, evil or terrorists. That is by design with the violent left who proclaims “tolerance” by others except when they don’t get their way 100% of the time. I use the recent riots and protests regarding the Donald Trump election as evidence. Let’s examine how Islam “taqiyya” (deception and lying) was used during the Donald Trump rallies to feign racism. UPDATE: More YouTube censorship when reality does not jive with their narrative. They scrubbed the video of violent left.

Leftist ideology has at its core the fundamental transformation of nations into globalist regions. Globalism goals are to eradicate borders and culture of host nations by Islam. Those who studied Islam or have broken free from its bondage will invariably warn all who listen on why western nations must never embrace Islamic immigration.

The brutally honest will not capitulate to political correctness but truthfully reveal the tenets of Islam and the Quran and passionately warn you on their true evil. Islam is being used to implement the globalist agenda with open borders to destroy the culture of the host nations. This is an orchestrated and coordinated invasion by globalist agents in government to replace national identities with globalism. This is being mandated by the cabal through international central bankers to form a new world order.

The following video is by an ex-Muslim woman who escapes the shackles of Islam. She now lives in perpetual fear for her life; for the brutality imposed upon any Muslim leaving Islam is worse than that of the infidels.

The moderate and uninformed have been brainwashed by the corporate globalist controlled media and our educational institutions that now function as indoctrination centers. For that reason we review how all Islam is required to participate in one or more of the following forms of Jihadi. Westerners are totally uniformed and misinformed on what Jihadi is. Most think it is violent bombs and bullets, and they are correct, but it is not limited to that at all. Let’s review what the Quran teaches and Islamic practices on jihadi.

OCCUPATION JIHADI: Overwhelming the population of infidel nations via legal or illegal immigration until such time that the Islam population is dominant enough to take control of the political and economic systems to impose Sharia Law. Mosques are immediately built to serve as the central information and meeting place; barracks; armories and arsenals for Islam warriors under the guise of religious worship.

CULTURE JIHADI: Assaults upon the infidel culture to demand accommodations and special treatment; demand halal food preparation and distribution; will stage protests, demonstrations and marches to proclaim unfairness, discrimination and persecution. Will not assimilate, but rather seeks to have host nation accommodate Islamic demands.

PROPAGANDA JIHADI: Assaults infidel media and communication organizations and outlets with propaganda proclaiming Islam as peaceful; benevolent; and benign. Islamic groups will demonize all opposition to Islam as evil, hostile and unjust to garner sympathy. In the United States CAIR, Muslim Brotherhood and the Islamic Society of North America are but a few examples.

ECONOMIC JIHADI: Will demand implementation of Sharia for economic and banking transactions; demand governmental financial assistance based upon oppression and discrimination; purchase significant real estate parcels and other real property. 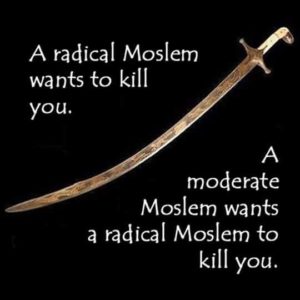 TAQIYYA (DECEPTION) JIHADI: Engage in community good works and other deceptions to lull infidels into complacency by feigning friendship, cooperation and neighborliness. On a national basis taqiyya is used with treaties with foreign governments and is used as opportunity to reconstitute, build up arms, armies and military in general until advantage is gained. Will violate treaties immediately upon prospect of overcoming is established or perceived.

VIOLENT JIHADI: Terror, the threat of terror, extreme violence, fear, intimidation, physical and sexual assaults, maiming and decapitations to force the infidels to cower into docile submissiveness. Used as a means to overwhelm and dominate host nations or bordering enemy nations.

ALL Islam engages in one or more Jihadi which is designed to lull, assault and terrorize infidels into Islamic Submission. Those who refuse are executed via beheading or hanging. Islam declared war upon all infidels worldwide and are here in the United States now with millions more coming.

Article: What makes Islam So Different?

Tags:
islamjihadiimoderateradical
« How We Got to Trump; It Began in 2008 … Sort of
Betrayal of America Deeper Than Imagined »
Share

WTC 911: What Do You See?
Islam Is An Idiocracy, Not A Religion
The War for Our Survival is On!