Linda Sarsour is exposed lying again, this time on Female Genital Mutilation. Lying is permissible under Islam for any active Jihad (struggle) mission. The Sarsour jihad is to advance the Islam conquest of her host nation, the United States of America through the imposition of Sharia law upon the land.

Lying is generally forbidden under Sharia but is authorized and encouraged under ‘Taqqiya’ which literally translates ‘deception’ and is a key tactic for Jihadists. Any follower of Islam may suspend any Islamic law including eating pork when used to deceive an enemy and lull the infidel into trusting the jihadist.

Linda Sarsour is a racist and sexist in addition to her many evils not the least of which is Islam itself. She is on record refusing to answer a question posed to her on FGM because it was from a white male. Not to be outdone she has also accused Ayaan Hirsi Ali, a victim of the barbaric Islam practice of female circumcision, more appropriately known as Female Genital Mutilation, as a liar and attacked her for daring to speak the truth on FGM.

Sarsour is leeching off the mentally retarded left and their globalism paradigm as pawns in her game to advance her jihad mission. She sees and seized her opportunity to destroy the American culture, language, borders and laws to advance the viciousness of Sharia. The lies and deception of the left fits Islam like a hand in a glove.

Let’s take a look at a short video by David Wood on Linda Sarsour and her lies about Sharia law and FGM.

We learned through this video the name Sarsour means cockroach in Aramaic. I find that quite amusing and appropriate. Both flee the light for darkness is their genre.

Islam will never assimilate into any culture including America. Islam is forbidden to assimilate under Sharia unless one is engaged in taqqiya and wants to feign assimilation to deceive their infidel targets. Such was the case with the San Bernardino terrorists to gain trust right up to the time they slaughtered them.

Wasn’t it nice to know the San Bernardino terrorists were vetted by the State Department, DHS, NSA, FBI and the INS? Goes to prove Islam cannot be vetted and Islam is wholly incompatible to all western culture because assimilation is forbidden.

One would have to be blind, stupid or mentally incapacitated to not see what Islam is doing in Europe and other western cultures they invade. The denial of Islam could easily mean disability and death to any westerner. Goodness, Sweden is a prime example of a completely docile and welcoming people who are destroyed for denying the reality of Islam. They continued to deny even while their nation was under violent siege.

That next nation to be destroyed and subdued by Islam is Canada. If Canadians choose annihilation, that’s their business. But when their choices jeopardize America, it becomes our business. We need to start paying serious attention to our northern border. If we don’t act soon America will literally be under siege from the North and the South. With California utterly dysfunctional we may need to protect our western flank as well. 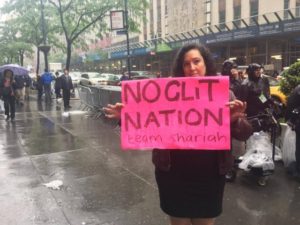 I’m really struggling to wrap my head around the mind-boggling level of utter insanity befalling the leftist globalists regarding Islam. Even when confronted with the reality of Islam, these people seem to think it can be wished away.

Not surprising. These leftist are morons and believe man can control the weather and even when the science proves them wrong they continue their ‘la-de-da’ frolic down the road of destruction. Even the most basic and fundamental chromosome science of xx and xy for male and female is being denied. Science recognizes no others. Such mental retardation is unconscionable making transgender proponents freaks and imbeciles.

I have come to believe the left is not rejecting reason … they are incapable of it. They have reduced themselves to the basest form of life by choice. Most of us were educated at what are now ‘indoctrination centers’ but half of us were able to reason our way out of the mind conditioning. I believe we will be victorious in stopping the spread of fascist globalism, but what do we do with the mindless snowflakes and cupcakes once defeated?

Should they continue to embark on their present course of anarchy, violence and rioting it will come to the time where they will need to be put sown with extreme prejudice. Many of those joining with these masked domestic terrorists are Islam. The enemies of state are in the state and bringing into to this nation jihadist.

Armed conflict may be a foregone conclusion unless President Donald Trump can purge the government of the deep state leftists committed to transforming this nation into a non-sovereign globalist community of nations. There are not enough jihadists in this nation yet to overthrow by force and why we are greeted with such fierce resistance from the enemies within.