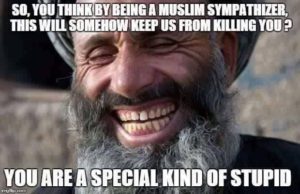 You can always count on the pathetic left’s deviant support of terror, violence and mayhem with their irrational denial of radical Islamic terror. They lash out every time their pathos gets exposed for its repugnant malevolence!

Rather than bemoan the senseless mass murder of young girls at the Ariana Grande concert in Manchester, England the vile far-left would rather tweet they fear the Islamic terrorist attack will fuel ‘islamophobia.’ How dreadful to actually hold accountable the ideology fueling Islamic terror.

Islamophilia is truly a mental disorder for what else can such an irrational affinity toward and denial of Islamic Idiocracy as a system of violent global conquest achieved through murder, violence and force? Islamophilia is a form of psychosis because those suffering from this malady believe that to deny the 1400 year history of Islamic violent conquest renders it benign.

When Islamophilia impacts individuals it is a sad condition; but when the collective far-left suffers that malady and enacts national policy it is catastrophic endangerment for it puts an entire nation at risk. Even when Islamic terrorists acknowledge their crimes, the islamophiliacs continue to deny reality by attacking those who pinpoint the murderous culprits.

Islamophilia is treacherous for it adversely impacts national, legal and immigration policy. The problem is those suffering from this psychosis are incapable of recognizing their mental disorder. A case in point is BBC analyst Katty Kay telling people they need to ‘get used to’ attacks.

Sometimes the mental disorder is so advanced that rather than acknowledge reality they develop a deeper and more intricate alternate reality to reinforce their Islamophilia. Another CNN analyst in the UK stated falsely that there have been multiple ‘right wing extremists’ plots to carry out terrorist attacks to make it appear Islamics are to blame. There is no evidence that any such thing ever occurred.

The analyst went on to say that the Manchester attack is likely a ‘right-wing false flag’ even though the terrorist is later identified as Muslim extremist Salman Abedi, a 23 year old Islamic suicide bomber. Such is common among the far-left corporate ‘fake news’ media coverage. CNN, BBC, NY Times and Washington Post are but a few of the lamestream ‘zombie media’ outlets that routinely fabricate and float false stories to support their far-left ideology.

Islamic terrorist Salman Abedi was part of a terror cell operating in the UK and his other extremist criminal cohorts are on the run as police and intelligence officers continue to make raids and tighten their manhunt noose. Other pro-Islam intelligence officers in the United States told CBS news, “They were exercising caution on the early claim of responsibility from ISIS.”

It is a common practice for allied international intelligence agencies to work together is solving crimes of this magnitude. It is unfortunate when such intelligence operatives continue to allow their ‘islamophilia’ to taint the intelligence based upon their globalist ideology that supports Islamic terror’s eradication of culture and borders.

CBS News reports, “There was security at the concert, but the bomber apparently didn’t try to get into the venue, instead blowing himself up in an entrance foyer area as concertgoers flooded out of the arena. Prime Minister May said the attacker had deliberately chosen “his time and place to cause maximum carnage” in the young crowd.”

Zoie O’Brien, journalist for the UK Express is reporting that ISIS is plotting more vehicular attacks on British streets. Radical Islamic Terrorists are celebrating the attacks and were ‘tweeting’ as much as four hours prior to the Manchester arena attack. I don’t think you need to be an intelligence officer to discern that this information is most likely being spread verbally via mosques and other sources like the Telegram.

Well dear Islamophiliacs, I’m certain you’ll be reporting the islamic saying this does not mean it or when it does occur we cannot know it. Islamophilia is a deadly dysfunction. They will call me racist, an islamophobe and call these attacks anything and everything other than what it is … radical Islamic terror.

WTC 911: What Do You See?
Islam Is An Idiocracy, Not A Religion
The War for Our Survival is On!