The western world is in general woefully ignorant of the true tenants and objectives if globalism and Islam, despite the obvious evidence confronting us to the horrors of islamic terrorism. We were lied to about this islamic threat by Presidents Clinton, Bush and Obama for they were all globalists and each had a role in laying down the latter stages of the globalization strategy for the New World Order (NWO). This 30 year pathway of globalization was veiled behind the protective curtain of the Lame Stream Media. Thank goodness for our three toto’s; James O’Keefe of Project Veritas; Julian Assange of Wikileaks; and the independent internet media who together pulled away the curtain. Divine Providence is intervening so we could see just how utterly corrupt and depraved government and the media have become.

The Presidential election of 2016 was the globalist end game with the final four to eight years under Hillary Clinton slated as the fait accompli. Her job as closer was to lay the death blows to seal our fate by hammering the final nails into the coffin of liberty and nationalism. Her defeat was a crushing blow and a Divine Reprieve that brought us back from the precipice and bestowed a narrow window of opportunity to turn this thing around. The absolute perfect man for the job was raised up at the perfect time in history to reverse the globalism path. We may once again infuse godliness as we restore our Constitutional Republic and a sound economic foundation. I truly believe that most do not realize just how close we came to the brink of extinction of our traditional American values and our American way of life.

Why do you think the globalist left is putting up such a hissy-fit over losing an election? Significant time, money and resources were put into the final act and they spared no evil in fixing the election for what they thought would guarantee the victory for the NWO reality. The United States and the United Kingdom were the big boys to be taken down. The globalists were sooo close they couldn’t contain their glee and were drooling over this 100 year dream finally coming to fruition. That was until Brexit which globalists hoped would be no more than a speed bump that could be undone. But when President Trump defied all odds by winning a rigged election in favor of Hillary Clinton, it soon became clear the massive Tsunami of America Rising against globalism could not be contained. Actually the whole world is rising against globalism.

Islam has a vital role in the globalization objectives for a New World Order. The Globalist are a violent fascist regime that can only achieve their global objectives 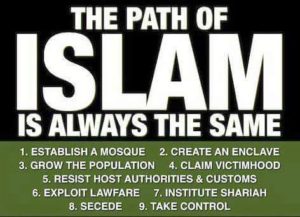 through force and intimidation and there is brewing a major onslaught against the American people the likes of which we have never seen before. The globalists will engage scorched earth tactics if their defeat looks inevitable. This American Nationalist movement is just too large a land swell to not see this to fruition. This is where the islam threat comes into play. All these paid rioters, snowflakes and women are the noise that is to distract from the real war that has already begun. That war is is being waged at the highest levels of power and government; and it will also be we waged on the ground via significant terrorism coming from the 35 or so terrorist no-go zones dispersed throughout  9 states and perhaps as many as 12. It is no accident that the Trump administration is replete with warriors well suited to the task of defeating the fascist, globalist left … and islam here and abroad. When the globalists believe the time is right they will unleash violent Islamic terror upon people of the United States but this administration will be ready to put them down … again. My guess is some will be staged at the southern border to disrupt the wall while most will be in the mainland. 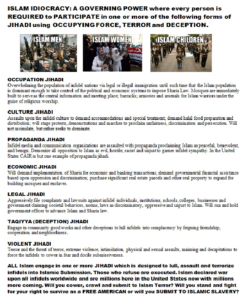 I plan to publish a series of articles with supporting documentation to make American aware of the significant threat of islam that most are unfortunately still oblivious about. The fearful ones are in denial because the reality is too much to bear. Violent islam jihadi is everywhere islam rears its ugly head and they are here in more massive numbers than you think. So are the many other forms of jihadi for with Islam not all jihadi is bombs, bullets and violent physical attacks. The woman’s march on DC was co-sponsored by Linda Sarsour as her islamic jihadi operation. Jihadi literally means “struggle” making jihadi the duty of every man, woman and child under islam. Jihadi is the struggle to make every nation and every person on the planet in subjection to islam. The literal meaning of islam is submission. Islam is not a religion nor is it peace. Islam is a system of violent conquest through a multi-faceted strategy to dominate the world. Please view the short video and be a frequent visitor to the Clarion Projest website. Awareness is vital to our safety and wellbeing; accept or reject after you inform yourselves.

Video: How Islam is Taking Over The World: Islamization Explained

Tags:
conquestglobalismglobalizationislamjihaditerrorism
« The Act of 1871 Changes Everything, Part 2
Are All Leftist Comedians Vile Nauseating Pedophiles? »
Share

Linda Sarsour: The Lyin’ Jihadist on FGM
The War for Our Survival is On!
ACT for America March Against Shariah