So how’s all that Islamic immigration working out for ya? I’m not making light of the horror, but how long will we allow the moronic leftists and globalists to control immigration policies?

Allowing these Islamic madmen into civilized nations is inviting death and mayhem. They themselves are telling us they will not assimilate. They are coming as part of an invasion strategy by the globalist for this is accomplishing the destruction of culture and borders through fear and terrorism.

It’s not racism but insanity to allow such people into western culture. Immigration without assimilation is invasion! It’s an overthrow of national sovereignty and only the untreated mentally ill are incapable of seeing this. Continuing to allow the inmates to run the asylum makes us equally dysfunctional and in need of treatment.

This globalism agenda must be put down permanently. The evil globalists and the propaganda fake news media are counting on the majority to cower under the threat of names like islamophobe, racist, misogynist and the litany of other manipulative tactics.

Yes, insulting names are tactics to silence and immobilize the mainstream so the left may move forward unhindered to fundamentally transform nationalism into globalism. So far the globalists are setting the agenda of death and destruction by attempting to make terrorism mainstream and the ‘new normal’ for society. News Flash: there is no ‘new normal’ but only ‘abnormal’ and we should not tolerate any more insanity from the globalist elite who insulate themselves from the carnage of their decisions.

Look at the antics of Kathy Griffin who strikes a Jihad pose holding a decapitated bloodied head of American President Donald Trump and says its comedy. And when sane Americans push back in disgust, she claims victim-hood and accuses those so offended as being Trump’s Army he commanded to go after her. Utterly delusional!

How is it that someone so disassociated from reality is allowed to function unsupervised? I fear Kathy Griffin has become the poster-girl for all the undiagnosed mentally ill adults who flock democrat. Why? Because democrats embrace a victim-hood ideology that utterly disdains personal responsibility and hold accountability in contempt.

I do not say this in jest or as a form of insult. These are the low functioning insane among us slipping through the mental health cracks of our system. Many like Griffin occupy places in the legacy media, elected officials, judges and other figures who are incapable of discerning the impact of their decisions upon society.

Look at Debbie Wasserman Schultz and Hillary Clinton for example. Do not their antics indicate the behavior patterns of the criminally insane? How many bodies have to mount up before this is seriously addressed? 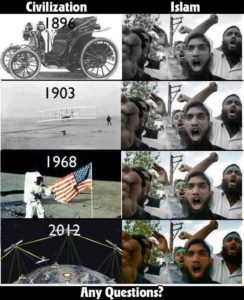 Our denial of the truth on Islam could also qualify us as insane and disassociated from reality as well. There are 1400 years of documentation on Islam so denial is without excuse. Islam is not a religion by a fully contained Idiocracy of global conquest. Religion is but one component of Islam.

The Islam Idiocracy consists of a judiciary system of civil and moral laws they call Sharia and Hadith; business, financial, economic and political systems of governance; military, religious and societal structure. Islam does not assimilate but dominates. Submission, the literal meaning of Islam is the overarching tenet of what Islam is. Submit or die.

Does this in any way sound like assimilation? Just ask the Swedes, Germans and the French. Not their leadership for they represent the insane globalists whose agenda is more important than life itself. The Swedish experiment that women can govern better than men is a colossal failure.  Western nations that embrace globalism and Islam is suicide

Let’s take a look at some of the evidences of Islam and I do hope you will take the time to view the videos and read the articles on those who properly warn us of the evils of Islam. These are credible sources who have extensively researched or extricated themselves from the grip of Islam.

This first video is from Bridgette Gabriel who offers a concise vestion of 1400 years of Islam. It is an excellent synopsis and one that I hope you take the time to view.

This video is a description of how Islamization works. We see this happening now in various nations in Europe, Asia, the Philippines and also the United States.
This next video is from an ex-Islamic woman’s impassioned appeal to not be deceived by the false Islam being advanced globalists, leftists, media  and democrats here in the States. Organizations like CAIR, Muslim Brotherhood and Islamic Society of North America are but a few examples of organizations that exist to deceive the western world of the true evil intent of Islamization of host nations.
You need to research for yourselves the truths on Islam. There are many voices that exist to muddy the waters and disguise the true intent, purpose and ideology of Islam. The truth is available for those with ears to hear and eyes to see. Does not all the Islamic terror even put a dent into reality or will you continue to live a deceived life by the criminally insane.

Choose wisely for the lives of those you love and know depend upon it.

Article: Three Islam Jihadis Killed After Murdering 7, Injuring 48; Terrorists Yell ‘This is for Allah’ After Mowing Down Crowd on London Bridge Then Go On Stabbing Frenzy

NHN Article: The Denial of Islam is Our Titanic

The Denial of Islam is Our Titanic
The War for Our Survival is On!
The Globalist-Islamic Threat Looms Large