Obstructionist Congress led by RINO Republican House Speaker Paul Ryan and Senate Majority Leader Mitch McConnell  continue to allow Democrats the upper hand in not confirming 17 President Trump nominees. The American people are fed up with Republican leadership’s betrayal of America. Since 2010, Americans have continued to send Republicans into office to stop the globalist anti-American agenda and all they did was whine, moan and groan on why they could not stop the Obama agenda … so they in turn provided a paved highway for its implementation. Now that Republicans dominate the Presidency, and both houses of Congress why does their obstruction of what’s right for America continue?

It’s time to stop pretending and face facts. The majority of Republicans want the same thing Democrats do: an end to nationalist America for the globalist version of a New World Order. They continue to hamstring America with large, bloated federal government spending and laws that seize power and oppress freedom and free speech away from the people. Republicans seem to be trying to out democrat the democrats for they keep spending this nation into oblivion. Go ahead Republicans and keep allowing hurtful and lethal immigration open-borders that let illegals pour through our borders like water through a sieve. Keep obstructing common sense provisions by capitulating to a propaganda media that is bought and paid for by the globalist who control them, the democrats and the republican leadership. Even the people’s choice of Donald Trump as President did not change that, but unless you wake up and smell the political coffee the people certainly can via a primary challenge come 2018. The Republican leadership in the first 10 days of the Donald Trump Presidency has obstructed him more than they did Obama over the last eight years. What’s that about? 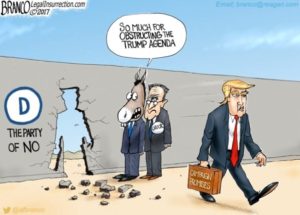 When John McCain and Lindsay Graham are more concerned with the accolades of a Lame Stream propaganda media for joining obstructionist Democrats than they are with the vitally important common sense measures to secure the borders and restore American values by protecting the people of America one has to question their loyalty and patriotism. The people have had it with the self-serving political elite who place their own interests above those of the constituents they serve. When Paul Ryan and Mitch McConnell proclaim they are doing everything they can … nothing … then perhaps it’s time to get new leadership. An effort to proclaim no-confidence must begin to change Congressional leadership now. Paul Ryan is a globalist plant by Reince Priebus when he was Chairman of the RNC. Remember when the people rebelled against House Speaker John Boehner for refusing to do the job the American people sent him to do? Why Reince is now the Chief-of-Staff for Donald Trump is a mystery. It certainly does not appear to be so he can help the Congressional leadership pass the agenda for America or to help streamline the confirmation process. If it is, Priebus gets a big fat F. If Congress is really interested in stymieing another uprising by the real grassroots, I strongly urge the Republican leadership to end the obstruction and confirm the Trump nominees. These men and women represent the best minds in America and are beyond capable for doing the job they are nominated to do.

The paid inorganic protests that are staged to show opposition are smoke and mirror tactics used by the globalists and the media is the propaganda arm for the globalist agenda by incessantly providing coverage to the handful of protesters to feign mainstream American opinion rather than what America has chosen in a landslide election. These tactics were at one time very effective when most Americans were in their political coma, but now half of them are awake and not buying the deception. In fact, the propaganda is hurting them and those in Congress who are capitulating to the “noise” without substance. The true grassroots are those who went to the polls in massive numbers that not even the rigging of the election by globalist DNC and corrupt Hillary Clinton campaign machine could overcome. The true grassroots are rustling and rattling their sabre for this to end now.