There is a civil war going on in America that is really going on across the globe. Never before have so many world governments been so widely oppressive to their own people in transitioning from nationalism to globalism. The United States heartily and overtly embraced oppressive totalitarian globalism overtly in the most recent 10 year period and covertly for the last 30 years. This accounts for the Great Divide in America, and the global unrest we see percolating in the United Kingdom, Europe, Scandinavia and Asian nations. The tenets of globalism has reared its ugly head and the free peoples and those who yearn to be free are rising up in opposition to globalism. The globalists in national governments have an objective to destroy their nation so globalism can emerge from the ashes.

Now that hard-core globalist criminals like Barack Obama is removed from power and Hillary Clinton denied the power of the Oval Office the mantle of globalism has passed to Senator Chuck Schumer. The truth is all this nonsense with the paid rioters and protesters are to create the illusion and imposed perception by the media that people across the globe and in America are actually fighting for oppression and dependence. The feminist marches have nothing to do with women’s rights but everything to do with abortion and the continuing right to murder infants yet in the womb. Such acts are a mandate of globalist depopulation methods so be prepared for a vicious assault upon the Supreme Court nominee Neil Gorsuch. The Constitutional mandate of advise and consent for SCOTUS qualifications have devolved into ideological battles. Such is the state of globalism on Capitol Hill.

War is another tool for depopulation  and why we see the Russian false flag being paraded about since the election. The globalists failed to oust Trump from 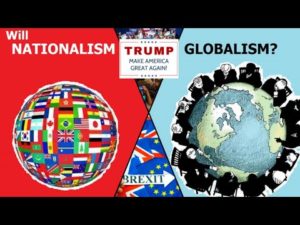 assuming his rightful office using the narrative for WW3 with Russia. Putin and Trump see the folly in a major conflict with each other, so the cabal and central bankers are now seeking to agitate China, Korea and some hate-filled nations in the Middle-East for the war narrative. The Obama regime financed and supported nuclear proliferation in the hostile Islam nations so finding an enemy there is fait accolpli. All this hatred toward President Trump is due to his stance for America that puts him in diametric opposition to the globalist agenda. That’s why Chucky Schumer is launching a strong obstructionist movement to every inch of the Trump “nationalist” agenda to “Make America Great Again” and why they falsely claim this as a “populist” movement rather than a “nationalist” movement it truly is. The less Americans know about the globalist agenda, the better.

President Trump is so feared in his efficacy to accomplish everything he sets out to do and by garnering the greatest minds and talent America has to offer is why he must be stopped at all cost for this threatens to defeat and set back the globalist agenda for the next century. For the globalists it’s all hands on deck. Just to offer some additional evidence that the attacks against President Trump are well, trumped-up, let’s take a look at some bits of reality.

Emperor Obama stopped all Iraq refugee requests for six months in 2011.Where was the outcry … the protests and the media conniption?

Correct, there wasn’t any. Granted, Obama did this because the Syrians had far more violent jihadists that he wanted to bring in to the US, but I digress. Perhaps that’s why on November 19, 2015 Chuck Schumer tweeted his call to halt Syrian refugee resettlement until such time the US can develop tighter vetting. I guess Schumer felt nobody would recall that tweet for after all, it was way back in 2015 so who’d remember? Chucky is just doing his globalist duty by grandstanding his anti-Trump mantra by grandstanding crocodile tears with his Muslim props. Oh, lest we forget when President Trump called the tears of drama queen Schumer “fake tears” and went on to ask who his acting coach might be? The most likely answer is his second cousin and actress Amy Schumer showing that bad acting may very well be genetic.

Globalism is a multifaceted, long term strategy and highly expensive scheme for it required coordinated effort of bad actors around the globe. A fundamental change in thinking and culture does not come easily or cheaply. Our indoctrination centers, you know, the institutions that replaced schools and stopped teaching critical thinking skills, needed time to produce enough mind-numbed robots they could attract for the needed mobs at $15 an hour they could call a grassroots protest. Perhaps it’s time to outline some of the key distinctions between Nationalism and Globalism so we can see why such vitriolic attacks upon President Trump and America befall anyone demonstrating the following characteristics.

This list could be for more extensive but I think it sufficient to illustrate the basic differences and incessant attacks upon each and every aspect presenting a threat to globalism. And I’ve not even touched the indoctrination tools by the globalist puppet United Nations and the protest movement on national monuments and symbols.