Paris Accord: Free At Last! Trump Ends Era of Error 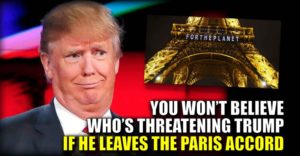 THE United States of America will no longer agree to be raped and pillaged of our wealth by the globalist forces who hate America. The totalitarians hid their fascism by hiding behind the pseudoscience of climate change. No doubt those who threatened us to not leave will now perform another of their now vaulted hissy-fits to bring down this burgeoning nation.

So besides the globalists who else is not happy with our withdrawal from the Paris ClimaNAZI agreement? The communists? Yup, they are! The socialists? Yup, them too! Fascists? Uh-huh. Democrats? Of course and that is redundant for all the aforementioned are wrapped up in democrats. Oh, let’s not forget the lamestream fake news media.

This is a GREAT DAY for America … enjoy the moment for it will not last long. As I am writing to cheer the great news the corporate fake news zombie media are writing and broadcasting their jeers to lament the resurgence of America. Are we waking up now America? Are you getting the stench of our enemies within?

President Trump gave yet another truly remarkable speech explaining why the US is dropping the Paris nightmare agreement entered into by Islamic globalist Barack Hussein Obama. The terms of that agreement could only be agreed to by the enemies of national sovereignty.

President Trump said, “The Paris deal hamstrings the United States while empowering some of the world’s top polluting countries should dispel any doubt as to the real reason why foreign lobbyists wish to keep our magnificent country tied up and bound down by this agreement. It’s to give their country an economic edge over the United States. That’s not going to happen while I’m President of the United States.”

President went on to say his job is to give America a level playing field but the Paris accord, “handicaps the United States economy in order to win praise from the very foreign capital and global access that have long sought to gain wealth at our countries expense. They don’t put America first, I do and I always will.”

So far President Trump has for the most part done just that is spite of a hostile Republican Congress; a hostile Speaker of the House is Paul Ryan and Senate Majority Leader in Mitch McConnell; and an absolutely unhinged and obstructionist far-left democrats in the House and Senate.

The corporate fake news media is incessant in their pounding the false flag narrative of the Illusion of Collusion with Russian while completely ignoring real criminal activities taking place with illegal spying, unmasking, leaking of classified information by the deep state Obama operatives and the cover-up of past and current crimes especially concerning that of the Seth Rich murder connected to the DNC.

The granite block of corruption and criminality is slowly being chiseled away but it never seems fast enough. No President in the history of America ever had to endure soft coup d’état’s from the deep state, violent radicals, Congress and the Judicial branches of government all the while under constant barrage by the legacy media. The fact President Trump has accomplished all he has already is a tribute to his character, fortitude and work ethic.

“At what point does America get demeaned,” asks President Trump, “At what point do they start laughing at us?” He demands fair treatment for US citizens and our taxpayers. Just the brief examples he give were more than sufficient for one to start shaking their head. Who would ever agree to the terms of the Paris agreement? Only our enemies it seems … both domestic and foreign. Speaking of enemies; More Censorship by YOUTUBE!!!

Many of our trade deals are going to be renegotiated for very rarely do any of them work for the interests of this country. The Paris accord not only ‘inflicts severe trade restrictions’ says Trump but it goes on to include, “Yet another scheme to redistribute wealth out of the United States through the so-called ‘Green Climate Fund” that calls for developed countries to send $100B to developing countries all on top of America’s existing and massive foreign aid payments.” The total cost to America under this agreement would result in $Trillions in a Marxist-Communist scheme to cripple and destroy America and her economy while other nations never pay their share.

The US has already handed over $1B from our operating budget in a very underhanded manner orchestrated by President Obama in his final days in office. The UN scoffs that $100B annually by the US is ‘peanuts’ and the tail that wags the dog. This level of contempt and arrogance by those globalists with an ‘entitlement’ mentality is an affront to every hard working American busting their butt to carve out a better life for themselves and their family.

The Green Climate Fund director estimates that the US annual contribution come 2020 would amount to $450B annually and continue to rise moving forward. All this money and nobody can account for what or where the money is going. Theft and pillage by the international totalitarian globalists who are doing nothing more than sweetening their coffers and those of their cronies via the climate change scheme. Thanks Obama!

Now this so-called ‘climate agreement’ has no affirmative obligations by the world’s top polluters for decades to come if ever at all. Climate change is the pseudoscience masks these thugs and robber-barons wear to extort money from America. Our domestic needs far outweigh surrendering our economic future to the New World Order criminals. 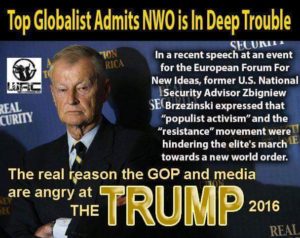 Globalism has extracted the factories from America to third and fourth world nations and now the Paris treaty extorts our wealth to retool, train and funds those same factories? These treaties are designed to supersede the US Constitution and laws and by doing so create constitutional and legal crises and obligations that are designed to destroy national sovereignty for the globalist dream of new world order.Their dream is our nightmare. Such actions will transfer decision-making on domestic economic issues to those in Europe, Asia and the rest of the world thus decimating our national sovereignty. By extricating ourselves from this ‘deal’ and cutting the domestic chains that imprisoned us we are free to unleashing our abundant energy reserves and eliminate the extensive legal liability assumed by the Paris accord.

This climate deal absolutely removes the right for America to conduct its own domestic international affairs. These are the incremental steps of globalism and eradication of national sovereignty. The Paris accord is the beginning of the end. When we break free from the domestic attacks on President Trump by the domestic globalists who are committed to stop him by any means necessary we can set the globalists back to square one if we can get two terms of restoration from President Trump.

Video: President Trump Speaks on Paris Climate Accord (6-1-17) (embedded above)

NHN Article: Globalists Coopt Trump; Not What America Voted For

NHN Article: What Happened to Americanism Over Globalism?