Knives Out For Pelosi; Let’s Not Forget Ryan & McConnell 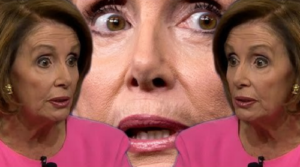 The democrats seeking to find a scapegoat for the embarrassing losses in Georgia and South Carolina are looking to senile Nancy Pelosi to shoulder the blame. She’s a reason but not the reason for America is rejecting what the democrats have become.

The implosion of the democrat party began a long time ago. It has manifested its far-left extremism with the Obama regime who took lawlessness, socialism, communism, and globalism, erosion of morals, decadence, violence and hatred to levels not experienced in America since the violent radicals of the 1960s.

The Republican left is the GOPe establishment and they filled the void abandoned by democrats for what is called classical liberalism. We just call them RINO, Republicans In Name Only. RINO unfortunately represents the majority of the Republicans who falsely refer to themselves as conservative. Muddy waters and lies describe the politics of America and the two party system. 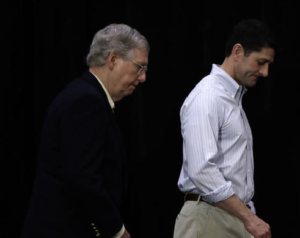 That said a big problem in getting the President Trump agenda passed can be summed in two word, Ryan & McConnell. Paul Ryan (R-WI) is Speaker of the House and Mitch McConnell (R-KY) is Senate majority Leader. Both are RINO and both are DC Swamp Creatures seeking to stop or derail the Trump Train.

How many realize that President Trump still does not have all his Cabinet picks confirmed? Yes, there are four being sat on by far-left obstructionist Chuck Schumer (D-NY), Senate Minority Leader. What is McConnell doing to change this? Nothing! He is being consumed by Repeal and Replace.

America sought a repeal of Obamacare, not a replacement. I guess no one cares that government run healthcare is unconstitutional. Any government controlled healthcare system will eventually morph into a single payer system and throw this nation further into totalitarianism. I don’t want this mongoose passed on to our children to eat away their liberty. We see the disaster with Social Security, Medicare & Medicaid. Government never learns.

Right now President Trump is showing his traditional democrat colors by calling the House version of the ACA ‘mean’ and that message has surely been heard by the Senate. We should be seeing what they’ve come up with this Thursday when the discussion draft is released for a vote next week.

The bottom line is Paul Ryan and Mitch McConnell are both unfit to lead Congress during the President Trump era. The Ryan-McConnell team served during the Obama era and rather than obstruct they paved the road for Obama treachery. When Obama was first elected in 2008 it was Boehner-McConnell who lamented we can do nothing for they control the White House, House and Senate.

Is that not what we have now? The difference was the far-left democrats were unified under Obama and that is a far cry from what exists with Republicans. We often claim that Ryan & McConnell are poor leaders, they’re not. They are not true Republicans leaders but GOPe which aligns them with globalist ideology. The GOPe have abandoned the planks of the Republican Party.

Paul Ryan has a lifetime Heritage Foundation score of 63% meaning he is a republican turncoat. His legislative record includes the following: Voted for NDAA which empowered the Russian collusion theory by giving it legal teeth along with legal precedence for internet companies like google, fakebook and twitter to suppress and censor free speech. These companies wasted no time in doing so.

Ryan is pro-big welfare, pro-amnesty and pro-TPP; he voted for TSA and TARP, the Obama banking and wall street bailouts of 2008-2010; he supported the auto bailouts; cut veteran pay under Obama; and voted for the Patriot’s Act which began the era of unfettered warrantless spying and unmasking which Obama horrifically abused culminating in the illegal spying and unmasking of 20 Million Americans.

Ryan supported and voted for the Bush ‘No Child Left Behind’ and gave Obama America’s first $1.1 Trillion budget which was more than Obama requested. Obama made a point to publicly acknowledge Ryan for his generosity with our money. Ryan is a ‘Never Trump’ and even when he stated he had a change of heart, he didn’t.

The man was never good for America for he is GOPe and very much in favor of the globalist agenda. Ditto Mitch McConnell. FreedomWorks scores McConnell a 73% on legislation which is barely passing and equivalent to a C-. That score is bearable for a Senator but certainly not acceptable for one serving as Senate Republican Leader.

Leadership can never fall below a minimum legislative score of 85% on republican values. During the Obama years his scores dropped as low as 43% and this is wholly unacceptable. The failure to have four of President Trump nominees still unconfirmed at this late stage shows either ineptness or obstruction.

Do Republicans have what it takes to replace Paul Ryan as Speaker and Mitch McConnell as Majority Leader? If we could only have one go, let it be Ryan for he has done the greatest damage. I believe America need both Republican leaders replaced for the Trump agenda to move forward.