Fried Rice ala Obama Anyone?

The LameStream Media (LSM) is facing a conundrum. Continue to aggressively provide cover for White House crimes committed by Barack Obama and Susan Rice or to risk exposure of the crimes committed in 2013 Syrian chemical attack should congressional hearings and investigations be launched. Such investigations will surely expose the illegal deeds of the Obama White House.

Such investigations could carry prison terms if convictions are made. The alternative is to provide up a sacrificial lamb for slaughter in Susan Rice and maybe even John Kerry and hope that’s where it will all end. A lie based upon covering-up other lies and ineptness is offensive but nowhere near the consequences of criminal activity over the 2013 chem attack scheme, spying on Americans unmasked, Benghazi and many others. The White House  unhatched a scheme to blame Assad for a chemical weapons attack he did not commit.

The first two Washington Post articles are being used to present the case this is precisely the strategy employed to insure the cover-up of the criminal acts perpetrated in the first Syrian chemical attack. The first WaPo article in the References below is an article authored by Susan Rice herself and published by the Washington Post. It seems WaPo journalistic standards are gone for John Podesta also writes for them as well.

In the Susan Rice article written March 21, 2017 Susan Rice perjures herself in defending her and Obama while attacking Donald Trump and his administration. Writing her account in a newspaper article is a very bold, gutsy and stupid thing to do considering it now memorializes her perjury. She must realize that facing criminal charges may be a reality in the very near future, no?

I guess believing you are immune happens when you’ve been engaged in lawlessness for so long in a protected environment. Hard to shift gears once those habits are cemented. Now read the second WaPo article.

I know reading fake news is a tough to endure but necessary for the purposes of this article. The article is most likely a standard cover-up story by the corporate fake news media to advance the globalist agenda and provide cover for the bad actors.

There is a good chance that the statements made that Syria did indeed release all its chemical weapons are true but if that line is defended aggressively it exposes the criminal activity engaged by the White House. A cover-up carries charges but it is less criminal than authorizing a false flag chemical attack to blame Syria for something it did not do. 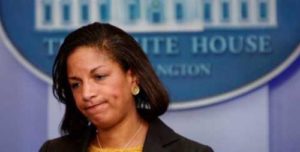 Take a lesser hit for something you did not do or protect yourself and risk exposer for greater criminal acts you did do. At this juncture you can add Syria and Assad to the long list of things you wish you never heard of before. The Benghazi cover-up completely destroyed the credibility of Susan Rice and whatever political capital she had was drained with her lie about a video being the cause for a ‘spontaneous’ attack that murdered four Americans on the September 11 anniversary.

A fact-check of her use of third party claims in the article that she used as proof for the inspection and removal of the chemical weapons from Syria may be more of a burden for Rice and Obama unless they too are willing to change their story and admit to a criminal cover-up. Not likely because the criminal enterprise operating the US Government failed in its continuity due to their failure to elect Hillary Clinton as POTUS.

There is a very strong probability that Susan Rice and John Kerry were truthful and the inspectors and chemical removal teams did remove everything they claimed. They’ll want to say Assad was lying when he said he gave all the chemical weapons up for removal. However, calling that truth a lie may be the ticket to minimize or perhaps eliminate any jail time. The case for incompetence is the likely defense to oppose cover-up.

This story would be completely plausible had it not been for evidence that the 2013 chemical weapons attack in Syria was a covert operation to blame and depose Bashar al-Assad. Let’s examine the evidence presented in a January 29, 2013 article written by Louise Boyle for Mail Online News.

The article presents email evidence released by a Malaysian hacker that says the United States is backing a plan to detonate a chemical weapon and to blame it on Syria’s Assad regime.

A month prior to the actual attack Obama issues a warning to Syrian President Bashar al-Assad that the use of chemical warfare was totally unacceptable. This was to set the stage for Assad’s apparent defiance and further enrage the world against him.

The plan needed teeth to justify the forceful removal of the Assad regime in addition to the chemical weapons. They were not expecting Assad to comply and believed this would be another Saddam scenario requiring Obama, Susan Rice and Hillary Clinton to assemble the forces to depose Assad.

The rest is history or should I say current events. The 2017 alleged chemical attack uses al-Qaeda terrorists and the video evidence appears staged and very poorly done. All video and photographic evidence presented by the usual fake news media suspects appear staged and in fact vindicates Assad.

I’m still waiting to see all the ‘overwhelming’ White House evidence. So far nothing is being presented except statements. Where are the photo and video evidence shown to President Trump that compelled him to act? To date I’ve seen nothing to justify the missile barrage.

Now we have evidence that neither the 2013 nor 2017 attacks were by the hand of Bashar al-Assad. This brings us to WaPo article two where the fake news media is back-tracking their defense and cover-up of Rice and Obama in the 2013 chem weapons criminal fiasco.

The last thing they want is for the evidence presented here to surface. The LSM is comforted when calling the New Media fringe, conspiratorial and fake for not toeing the lamestream corporate line. Please to be in that group hands down. Doing what journalism used to be a long, long time ago.

WaPo is now accusing themselves of not fact-checking the 2013 story … really? They also reveal that LSM partner in crime PolitiFact is scrubbing the internet of all their ‘2013 fact-check’ articles affirming the original story. Don’t want these articles appearing as evidence in New Media articles now do we?

WaPo article two is presenting ‘facts’ that claim ⅔ of the chemicals remained intact in order to promote a peaceful diplomatic solution. What a crock of BS. Assad giving in to the surrender of the chemical stockpile prevented the Obama regime from implementing a forceful regime change which was their plan all along.

Just ask Maummar Gaddafi of Libya who surrendered his weapons and was cooperating with America. Oh wait, we can’t ask him for he was assassinated by Hillary Clinton in her infamous, “We Came, We Saw, He died” gloat as she laughed hysterically.

The WaPo2 article accuses Rice of lying and renders her four Pinocchios, their silly rating scale to determine the degree of truthfulness being revealed. In the article is a video hosted by Amanda Erickson, a Washington Post reporter gets 5 Pinocchios by this reporter.

The enemy of President Trump now coming to his defense is rich. It illustrates the degree of the ‘about face’ by President Trump’s embrace of the globalist enemies he professed to oppose. I’ll give me a few Pinocchios when I stated earlier, “the criminal enterprise operating the US Government failed in its continuity due to their failure to elect Hillary Clinton as POTUS” as false because it appear from a foreign policy perspective Trump is doing just that.

A victim is needed and the LameStream Media who is NOT independent all walk in lockstep once issued their marching orders from the corporate cabal. They are offering up their lamb, or in this case Fried Rice, to take the hit because she is high enough on the food chain to satisfy the lust for blood. That is their thinking for that is how they do it.

Does a lust for truth and justice carry any weight? If you snickered at this statement, you may very well be part of the problem plaguing corrupt America. Susan Rice alone will not satisfy justice for the evil continues to march merrily along. It is the entire criminal enterprise running America that must be exposed and taken down. Will it happen? Now you may snicker for we both know the answer to that one.

WaPo Article1: Susan Rice: When The White House Twists The Truth, We Are All Less Safe

WaPo Article2: Susan Rice’s Claim That Obama Got Syria To ‘Verifiably Give Up Its Chemical Weapons Stockpile’

CBS Video: We Came, We Saw, He Died

FoxNews Article: Susan Rice is a Liar. Now Even The Liberal Media is Starting to Admit it