More Fake News and Sedition by NYT and Get Trump Media

The New York Times story on the Trump Jr. email scandal exposes the paper as both culprit and snitch if one merely reads more than their headline. I think they believe revealing the truth buried deep inside their story that they have no evidence to support will somehow exonerate them from liability. They think amiss.

The sedition and coup d’état being waged against the United States of America is being dismissed as politics. The days of having a peaceful transition of government, the pride and once shining light of American government is gone. We saw this crescendo in the democrat losses to George W Bush in 2000, 2004 and now in 2016.

The far-left democrats are fascist in that they believe themselves to be the only ruling power in the United States. When they lose violence increased with each loss. When they lose again in 2018 and 2020 expect a full-blown military coup d’état to take place. Their insanity and madness have come to this.

Can’t happen you say? The military will never go along with that! Then you’ve not been paying attention. There was a day when that was true but that was before 2013 when Obama purged over 200 loyalist generals to American sovereignty from the military. The reason for this was to eliminate any anti-coup efforts when the time came and Obama knew that time would be coming soon.

It could have happened late in his term but was most likely to occur during the term of Hillary Clinton when the fundamental transformation of America comes to fruition. Liberty would have come to a close, individual rights and liberties suspended, especially the Second Amendment; WW3 with Russia; a total economic and currency collapse; and emergence of a new world order under globalist control.

There are many who still believe this as ‘conspiracy theory’ in spite of all evidence to the contrary. Look what is happening with street violence and the soft coup d’état against our elected government by all three branches of government with all Obama, Bush and Clinton holdovers. These holdovers are the deep state that controls all the department of the federal government all embracing globalism.

The media is also controlled and the propaganda arm of the newly emerging globalist state that was supposed to check-mate the Constitution and Bill of Rights … Game Over. The FEMA camps remain idle only because our President is Trump, not Clinton. I know many will never be able to wrap their heads around just how close this nation came to being completely totalitarian in spite of all the evidence. If you don’t wake up to this reality now it will all be lost.

Control the information flow and transform education into indoctrination and voila totalitarianism! That’s how close we are and why President Trump and liberty is under such assault. Trump is winning so it’s all hands on deck. The left’s deception is over for they have revealed who they are … just not why they are.

It’s one propaganda assault after another. Propaganda is not a free press but the opposite of a free press. When the propaganda press crosses the line into sedition as part of a conspiracy to overthrow the United States government, shall not the government act to defend itself? If it wishes to survive as a free Republic it must. 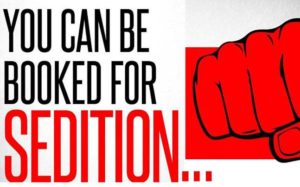 A simple definition of sedition is a revolt or an incitement to revolt, resist or an insurrection against an established and lawful governing authority. Under that definition there is plenty of that going on from the lamestream media, democrats, GOPe, DNC, judiciary, deep state operatives and even White House staffers.

Sedition is a crime under under 18 USCA §2384 (2000), a federal statute that punishes seditious conspiracy; and 18 USCA §2385 (2000), which outlaws advocating the overthrow of the federal government by force. This was intended to be used against those who rebelled against or offers a counter coup to the globalist government being installed as part of the globalism takeover of America.

Generally a person may be punished for sedition only when they make statements that create a Clear and Present Danger to rights that the government may lawfully protect. Penalties include fines, imprisonment up to 20 years or both.

However, free speech and sedition are juxtaposed and tension exists as it should between the two. Free speech is broadly protected under our First Amendment so prosecutions for sedition is rare. But when does free speech protection end and sedition begin? If you’re a leftist not in power they will say never. Truth is no hard and fast rules for such exists but it generally should include active revolt in speech or actions that advocate and/or teach the violent overthrow of the federal government using force or organizing persons to overthrow the government by force.

Examine what is happening as sedition and tell me what we should do because this is happening today and quite extensively. Islam in the USA are advocating the imposition of sharia using jihad; antifa, BAMN, BLM, Black Panthers and many other groups are rioting in the streets and destroying both public and private property. Nearly all of these groups are funded through the Soros family and/or tax dollars.

I believe charging one of these groups with sedition and perhaps a media organization routinely advocating for the removal of President Trump using force or violence should also be charged. This would send a chilling statement that will force distinguishing between protected free speech and prosecutable seditious acts thus granting the safety and security of all citizens.

The mere discussions of this topic may go far in tempering the out-of-control violence, recklessness and destructive acts by the mindless leftist groups and organizers. If it does not, charges of sedition on one or more of these violent groups will most likely do the trick. If that does not work then these people are genuinely committed to instigating civil unrest and war. If that be so, strong enforcement, arrests and prosecutions must be enacted or there will indeed be war.

But what about the media who incites and supports the violence by promoting false stories to further agitate the street coup against America? A very critical and discerning eye should be focused upon examining the propaganda media for their role and acting on it when the line is crossed. It’s been crossed many times already so it appears they are pushing the envelope to test our breaking point.

Americans are displaying our contempt for media abuses but they repent not and relent not. Just what will it take? They are in a financial tail-spin but refuse to eject. They rather continue to fire whatever ordinance in the form of propaganda and fake news stories they believe will depose the Presidency. Perhaps this is their suicide jihad mission?

The media structure is long past due for an overhaul and for free speech to survive the Congress must repeal the NDAA bill was secretly passed into law in stealth by Obama on Christmas Eve 2016 during the lame-duck session before President Trump was inaugurated. NDAA established and legalized the Russian Witch Hunt and the legal attack on free speech of citizen journalists. This was done by Republican Paul Ryan, House Speaker and Democrat Harry Reid and Republican Mitch McConnell in the Senate based on the false Russian story.

Is it not time to repeal the law that triggered all this Russian Illusion of Collusion nonsense and start prosecuting the seditious left? This was an orchestrated plan put in motion to overthrow President Trump and America says ENOUGH!

Article: Russian Lawyer Who Met With Trump Jr.: I Didn’t Have Clinton Info They Wanted

Article: Obama Purged Military of Those Who Sought Victory

Article: Is Obama Purging the Military of Dissent?

Tags:
fake newsmediasedition
« The War for Our Survival is On!
Establishment Republicans Betray America … Again! »
Share

Captive Press: Destroying The Myth of Free & Independent
13 Media Moguls Who Control What You Read, See, Hear and Think
Corporate Media Distrust And The Rise of The New Media