Reuters and nearly every fake news media outlet are reporting a failed missile launch by North Korea. It is probable the missile was destroyed while in its Shiloh at the moment of launch by the US Military cyberwarfare. The North Korean test deadline came and went and I reported on NHN a victory for President Trump with the Kim Jung-un blink.

Hours later North Korea attempted to showcase their nuclear capability and did indeed attempt a launch of an ICBM according to a military official. The South Korean Defense Ministry said it had detected a failed launch from Sinpo, the location of North Korea’s largest submarine base as reported by the Daily Mail.

Reuters and others report the launch came from near the city of Wonsan, on North Korea’s east coast. We however believe Sinpo is the more reliable location.

The ‘U.S. Pacific Command is fully committed to working closely with our allies in the Republic of Korea and in Japan to maintain security’ is a tongue-in-cheek statement that neither confirms nor denies US intervention in the failed missile test. 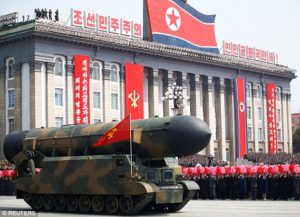 A failure by the North Korean missile test is more devastating than a military defeat for it humiliates Kim Jung-un and the NK defense ministry. North Korea had just completed festivities for its Day of the Sun, a significant pomp and circumstance celebration to showcase their nuclear missiles to honor the 105th birthday of Jong-un’s grandfather Kim Il Sung.

During this time the United States carried out Tank exercises in South Korea very close to the North Korean border. This along with the US naval Armada positioned in the Korean Peninsula has surely rattled Kim Jung-un though it has not diffused his rhetoric.

Jung-un threatened the US on Saturday that he will ‘pulverize’ US bases and Seoul, the South Korean capital if he was threatened by the US military. Tough talk is par for the course with dictatorial posturing but we have heard this all before from him and others and are not impressed or distressed.

Truth be told if it comes to armed conflict the North Korean threat can be disposed of quite quickly. The globalists in the admin are reported as pushing for the sanctions route but history shows this to be totally ineffective. We have been dancing to this nuclear tune too long for that song never ends.

I do not believe President Donald Trump is seriously considering sanctions as a stand-alone tactic to bring North Korea to the bargaining table. The globalist strategy for sanctions may accompany military actions as does the coal embargo but should not be considered a substitute for military action. This is not the Obama regime.

I stand by my earlier position made in the April 12th NHN article that armed conflict may be a foregone conclusion but will not lead to world war. North Korea must give up all nuclear capability and destroy their nuclear missiles. Its a hard-line non compromising chip.

An armed conflict will not escalate beyond NK and with this failed ‘test’ they may be reluctant to engage for they believe their ‘queen’ is disabled. Now that the source for the failure of the missile to launch, Sir Malcolm Rifkind has revealed himself and that CIA cyberwar tech took down the missile, I’ve updates this article at 7am Sunday morning CST.

China has troops on their northers border and the US has armored troops to the south and an armada off their coast. Let’s not forget Russia though operating independently has a dog in this fight for a nuclear detonation will impact them as much as it will China and Japan. We also must consider any impact on Taiwan and the Philippines. President Trump early in his administration brought Taiwan back into the game in dealing with China and may want to rectify the US travesty of abandoning Taiwan as a nation state.

Our faux pax with Russia during the Syrian false flag debacle is haunting us even more for Russia could certainly be an formidable ally in this conflict. Though Russia is not adversarial to our interests in North Korea, it is a lost opportunity thanks to globalist McMaster in his sabotage of the Syrian snafu. WW3 with Russia is still a lynch-pin in the globalist strategy for new world order. We must continue to hold President Trump’s feet to the fire to resist war with Russia and to dismantle the globalist forces manipulating he and his administration.