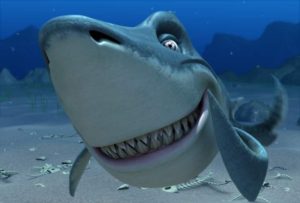 As the photo indicates, be weary when the shark baits you with a smile. No coincidence I’m using a pic from the 2006 Korean movie Shark Bait. When your predator smiles at you like they’re your friend, its moments before they devour you.

This is not a time of peace and hopefully not a time for war. There is a convergence taking place on all domestic and international fronts to instigate World War III by globalist forces. President Trump, don’t bite the bait to first strike North Korea. It’s a ruse.

When by all the fake news media outlets reported widely General McMaster proclamation that ‘North Korea is ‘coming to a head’ could that be the que for all hands on deck for all the globalist factions to implement their part of the strategic plan?

Was this statement solely intended for North Korea or for all globalist forces to make their move?

The domestic surge against freedom is to create a fog and increase pressure to react stupidly. The simmer is now increasing to a boil. The Fake News corporate media is feeding us what they always do … fake news and false flags. Be especially weary when they wax eloquence toward you for this may be the time they’ve chosen to lure you to devour you.

Is this what’s coming to a head? When people all around you lose their heads and begin to panic, that’s the time it’s most critical to keep yours.  Losing our wits now can be fatal.

Step Back and Assess!

Don’t let the fog scare you … don’t let the propaganda wear you. It’s all starting to converge and believe it or not it’s because we’re winning and they are the scared ones. A wounded animal is most dangerous and the time they lash out with all the ferocity they can muster. The globalists are the wounded animal.

Now is the time for level heads to prevail on all fronts. We cannot and must not keep dancing to the tune and tempo of the globalists.  There is method to the globalist madness. Blame President Trump for starting war with North Korea and push for its escalation to include Russia and China.

It makes no sense for Russia and China to ally with North Korea. Yes they hate the USA for ideological reasons but nuclear holocaust does not serve their purpose either. The game of diplomacy may mean they curse us in public but threaten to spank the reckless child in private. Do not respond to the rhetoric.

Globalist will accuse us of ‘not taking the threat seriously’ and advance yet more useless rounds of diplomacy to give North Korea time to reconstitute and formulate more detailed strategies. Globalists will manipulate us into war while feigning the opposite.

Communist dictatorships only respect strength of will, not negotiation. Strength is how we defeat North Korea. We have them on the ropes and should go for the knock-out punch. Not a pause to allow them to reconstitute and reformulate a backup plan.

Our presence in the Korean Peninsula provides ample resources to disable successful launches with our cyberwar technology and to conduct special-op missions to destroy their nukes. Kim Jong-un is not going to willingly surrender his nuclear weapons or his means to produce more. They must be permanently sabotaged and destroyed.

He telegraphed he wants to test weekly. Well, let’s be on the ready and prepared to continue to destroy his delusions of grandeur by mitigating ‘failed’ launches. We have the capabilities to reduce him to conventional warfare and he knows that is a suicide mission he may not be willing to pursue. Follow your instincts President Trump, they’ve served you well so far.

The domestic front is mounting an offensive is to preoccupy the New Media from investigating truth and exposing truth, corruption and the globalist agenda. Communicating truth to America and the world is a huge threat. Their strategy is to prevent the wave of citizen journalists from making a living doing what they do.

By disabling out communication platforms through such globalist organizations like Google, Fakebook, Twitter and many others war on free speech their expectation is to whittle us down so we’ll go away. Not on your life!

You silenced Milo for the most part, and now you seek the same from Alex Jones, InfoWars and all others. It’s not going to succeed because you have no idea about the passion and commitment of we the people to see this through. For every sizable mouthpiece you silence we will put up 10, 20 50 or 100 more to take their place.

This has always been a true grassroots movement for the last decade and we’re getting bigger and stronger by the day. The ones who can and will make a difference are awakening from their slumber in America and abroad. We are all fighting the same war in different lands. You can’t buy that kind of passion and patriotism.

The more you suppress, the more we grow and multiply. The more you remove and silence our voices on Fakebook, Twitter and YouTube the more other platforms will emerge like minds.com, Gab.ai and others. I pray YouTube collapses under its own totalitarian weight.

Currently all other video companies are smaller versions of YouTube so a new company must emerge who speaks for freedom. Contact us if you know of such a video company ready and willing to stand in the gap and promote freedom. You can knock us down, just not out. We refuse to go away and loath defeat.

You’ve gotten President Trump to wobble from his commitment of nationalism but he has not fallen. We will march on DC, the White House and Congress to remind you loudly and often who elected you and why. It is about America, freedom and liberty, justice and truth. Clichés to the globalist but passion to us!

Who do you know willing to bleed and die for the advancement of totalitarianism and globalism? Certainly not the paid anarchists and leftists for once blood starts flows their astro-turf movement hemorrhages. The patriots rise with even greater passion and commitment to see this through when that happens to us.

Zero Hedge: U.S. Propaganda Is Embarrassingly Bad (And Why It Matters)