Globalism is Totalitarianism and Tryanny

Why is liberty, America and President Trump under such vicious assault by the far-left globalists? The answer is Tyranny. The globalist agenda is tyrannical and the violent coup d’état against us by the deep state and the media is due to their end game strategy that was supposed to be implemented by Queen Hillary.

Our government has passed an evil law removing freedom of speech and freedom of press with the passage of NDAA. It got passed by the democrats (expected); from Paul Ryan, Speaker of the House who was very instrumental in strong arming House Republicans to pass the bill; same with Mitch McConnell, the then minority leader in the Senate. 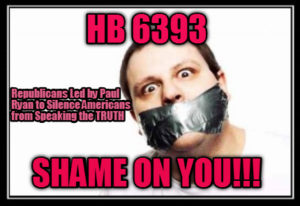 They snuck the anti-free speech bill HB6393 into the NDAA that Obama signed into law in the dead of night on Christmas Eve with little to no coverage from the LameStream Media. That was the legal authorization for the Russia Collusion Delusion and the internet assault on free speech from Silicon Valley.

Globalism needs dumbed down, uninformed and misinformed snowflakes, cupcakes and mind-numbed robots to pass such unconstitutional law without so much as a whimper. The more informed Americans become the more of a threat they become; and if you’re a fascist globalist that simply cannot stand.

Yes the left are fascist and antifa is thoroughly dumbed-down enough to think they are opposing Fascism, Racism and Nazism with their violent rioting when in fact they manifest all them all. Their history of violence is ignored or when it cannot be validated by the media and supported by globalist democrats and RINO republicans.

Look at the all the violent riots against people they disagree with and the destruction of property whenever their handlers cannot get their way. These are all paid anarchists and idiots who wreak havoc for hire. The tyrannical left suffers from mental illness and I do not say that glibly or as a form of insult because they could all be diagnosed with one or more forms of mental illness.

When violence and intimidation becomes the means by which people use to get their way they manifest deviant behavior. Deviancy is the hallmark of tyrants and globalists. The LameStream Media exercises such deviant behavior… Social media also exercises such deviancy from the likes of Facebook, Twitter, YouTube, Reddit and several others; and so do many of the people associated with the extremism of the far left, aka democrats and the fascist globalist in the republican party. 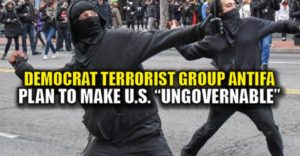 The Federal government; many state governments; the corporate owned fake news propaganda media; Silicon Valley large social media giants all support the fascist globalism agenda. They are all involved in the coup d’état to overthrow America, our history, culture, liberty and are now, at this very moment engaged in censorship of free speech they believe may pose a threat to the hostile takeover of American. Just look at Charlottesville and the statement by President Trump that condemns the supremacy groups like the KKK and the violent fascist groups like antifa and blm.

The insanity of the fascist globalists want to impeach President Trump over that statement. It is so utterly nonsensical it is almost impossible to refute due to the mental illness of those espousing such drivel. Liberty and freedom are under extreme assault from the tyrannical left and a un-reason-able mind cannot be reasoned with.

They lack the capacity for rational thought and critical thinking. The tyrannical and violent left are irrational beings who were never educated but indoctrinated into totalitarianism by our hallowed institutions of indoctrination, those entities that in time past were known as schools of higher learning. No such thing exists today.

When the above is conjoined with the mentally ill who are an unstable mixture of highly toxic stupidity and empowerment the result cataclysm. Here’s a partial list of what the globalists find offensive and must eradicate for their tyrannical totalitarianism to manifest as the societal norm.

This list could go on for it is quite extensive and more intricate than espoused above. The globalist plan is long term and is started very long ago for the rest of the world but for a free America it started around 1860, perhaps a little earlier. I think we can see now why free speech is such a threat for it exposes their true agenda which is full totalitarian control globally.

This globalist scheme is simply what we refer to as the new world order NWO. In order to achieve this scheme of total control requires that all information is managed and controlled. The media must be converted to propaganda and the corporate legacy media is already fait accompli. The new media is the threat to globalism and anything that deviates from the propaganda is labeled fake news.

When truth is exposed it must be ridiculed, called lies, fake news, conspiracy theory and the like. The internet is the only communication that was not propagandized and why the globalist end game failed. They believe their time is now. The economic collapse of 2008 was a demographically predictable collapse as is the demographic reality for the next major collapse of 2017-2025.

This was the time for Queen Hillary to finish the job. The advancement of globalism by Obama exceeded expectations. He is a non-citizen, America-hating politician elevated illegally to occupy the presidency who brilliantly executed the “fundamental transformation” which was the systematic destruction of the United States as a Constitutional Republic.

The election of globalist Hillary Clinton was to be the final blow to America and the fait accompli for globalism. It was the internet, alt-media and the alt-right as named by Hillary Clinton. The charisma of Donald J Trump defeated their plans in a big way. They had to make their move quickly and dramatically for the peoples of Western Civilization were beginning to rebel across the globe.

The devastating 1-2 punch that knocked the globalists to the canvass came first by Brexit and then by Donald Trump winning in such a landslide to make the rigged elections that favored Hillary Clinton vanity. The globalists are stunned and wobbly and desertions are taking place and the threat of defeat looms larger than life for the first time in 150 years.

What President Reagan did was a speed bump. The assassination attempt did not kill President Ronald Reagan but it did kill the conservative movement. Every US President since Ronald Reagan was a globalist, whether democrat or republican. Advancing their agenda did not depend upon party for the establishment of both parties is globalism. Until the election of Donald J Trump that is.

The globalists learned their lesson quickly and are now aggressively and desperately looking to silence free speech for they arrogantly believe they may still pull this coup d’état off. There will not be another time as this for close to a century. The tyrannical globalists have revealed themselves and shown their fascist, totalitarian cards.

The flurry of activity during the Obama “lame duck” period was worse than what he did in 2012 and the sabotage to the Donald Trump presidency was quite extensive. The threat of California secession is part of their strategy to diffuse the wall and cause President Trump to fail. The wall would be a major setback and one they will do everything in their power to defeat, including assassination of yet another President.

But this time, this President is anticipating such a move and prepared to defeat it. The die is cast and we must complete the wall for the globalists are in panic mode over it; we must repeal NDAA and its establishment a government controlled “ministry of truth” is tucked inside it and is now law!

Obama transferred power over the internet to the United Nations in an attempt to keep it out of the reach and protection of President Trump. We must stop the UN from internet control for the international agencies are hotbeds for the advancement and dominion of globalism. The war for Liberty is on!

Article: Technocracy Is The Keystone Of The NWO